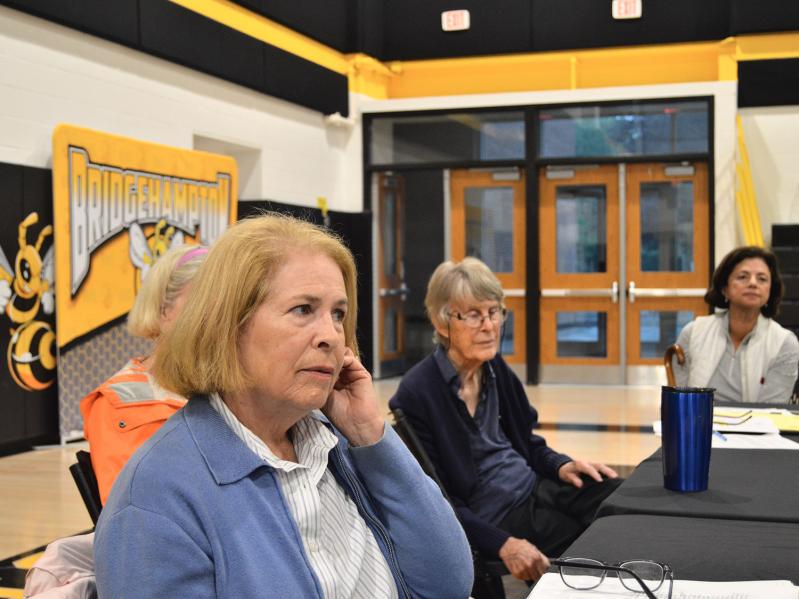 “The most responsible, thoughtful people in Bridgehampton had to disband because people weren’t listening to them,” said Pamela Harwood, left, president of the new Bridgehampton Civic Association and a former member of the Bridgehampton Citizens Advisory Committee.
Tom Gogola
By Tom Gogola

After disbanding as the Bridgehampton Citizens Advisory Committee last October, former members of the group met at the Bridgehampton School Monday afternoon with a laundry list of housekeeping items, freshly minted articles of incorporation from the State of New York, and a set of land-use priorities that they will focus on in coming months as the independent nonprofit Bridgehampton Civic Association.

As members of the citizens advisory committee, appointed by the South­ampton Town Board, they had taken aggressive positions on a number of contentious projects that came before the town’s zoning board of appeals — a downtown Bridgehampton CVS, an expanding Art Market Hamptons, a fraught firehouse museum plan, and others.

Pamela Harwood, the president of the civic association, said that people quit the appointed board en masse last October after losing a fight over the future of a former farm stand on Scuttlehole Road. The C.A.C. opposed a plan to turn it into the Sag Harbor Antique Fire Truck Museum but did not prevail despite what Ms. Harwood says was widespread opposition to the proposal from residents. The Southampton Town Board supported the plan (the applicants said the goal was never to create a museum on the site but provide storage for a few vintage fire trucks).

“That was the straw that broke our back,” Ms. Harwood said as other civic association members nodded in agreement at a table in the school’s capacious gymnasium.

“The most responsible, thoughtful people in Bridgehampton had to disband because people weren’t listening to them,” her vice president, Nancy Walter-Yvertes, said. “That’s not the way things are done in East Hampton,” she added, “where there is just a much greater civic ethic.”

Citizens advisory committee members felt they were stymied in their mission by a bureaucratic fact of life: While members of the Southampton Town Zoning Board of Appeals and Planning Board are appointed by the elected town board, those agencies then act independently of the town board. On the other hand, a C.A.C., by definition, has only an advisory role to the town board, and like the town board cannot comment on land-use manners before the Z.B.A. and planning board. But as a nonprofit civic association, the group will now be able to, for example, pursue litigation against project applicants with business before the town.

Ms. Harwood said the group has kept up with its work even as it was making the transition from a public entity to a private one.

“We’ve been working since then to formulate a new corporation,” she said, “but we’ve also been meeting every month as we always did and we’ve continued to weigh in on matters before the town board, the Z.B.A. and the planning [board]. We’ve never stopped advocating or having a voice in these matters.” She and other members push back at any suggestion that they’re driven by an excessive sense of Nimby-ism, and say they are instead responding to intense development pressures in town.

The group disbanded just as its members had helped set in motion a “very big success” against the Atlantic Golf Club earlier this year, organizers noted. The club had applied for a permit to build 6,000 square feet of employee housing at its course, thereby “taking up scenic vistas along Scuttlehole Road,” Ms. Walter-Yvertes said. That fact flew in the face of Bridgehampton’s hamlet plan, which sets out to protect those very vistas. And she notes that “the town code only gives restaurants and ag properties the right to have employee housing.”

Members also chalked up a win several years ago when they helped residents in pushing back against a CVS plan to site a new pharmacy on Main Street in Bridgehampton. CVS eventually pulled its application and built its new store in East Hampton.

Now the organization is turning a critical eye on the annual, popular, and controversial Art Market Hamptons in Bridgehampton, which the civic association members say has gotten far too crowded in recent years. “One thing that’s come up,” said Ms. Harwood, “is that the Town of Southampton doesn’t consult with the C.A.C.s for a special-events permit before they are issued — the town just issues them. In the case with the art market, it’s on a residential street. In general, it started out at a certain size and then grew and grew and grew, and at this point, it needs some rethinking about its location,” Ms. Harwood said. “One has to decide whether events of this scale are feasible any longer.”

This year’s Art Market Hamptons, scheduled for August on the corner of Montauk Highway and Corwith Avenue, hasn’t gotten its necessary permit in order yet, Ms. Harwood observed. So it’s uncertain whether the event will take place at all: “The town is not denying them nor is it issuing the permit,” she says. “We don’t know.”

Ms. Harwood says the Bridgehampton Civic Association will aim to take a holistic view of the land-use and development issues beguiling the region. “We don’t want to kick our problem to another neighbor,” she said.

Also on the agenda Monday was a discussion about landmark and historic districts in Southampton — the town already has an advisory board dedicated to a preservationist ethic. The civic association will continue the work with the town, says Ms. Harwood, and encourage it to go beyond designating Main Street in Bridgehampton as a historic district and instead “go to the back roads and preserve them, too.”

A Holiday Gift for Surfers and Beach Lovers
Holiday Lights Go On at the Lighthouse Saturday
Covid Vaccine Clinic at St. Luke's
END_OF_DOCUMENT_TOKEN_TO_BE_REPLACED