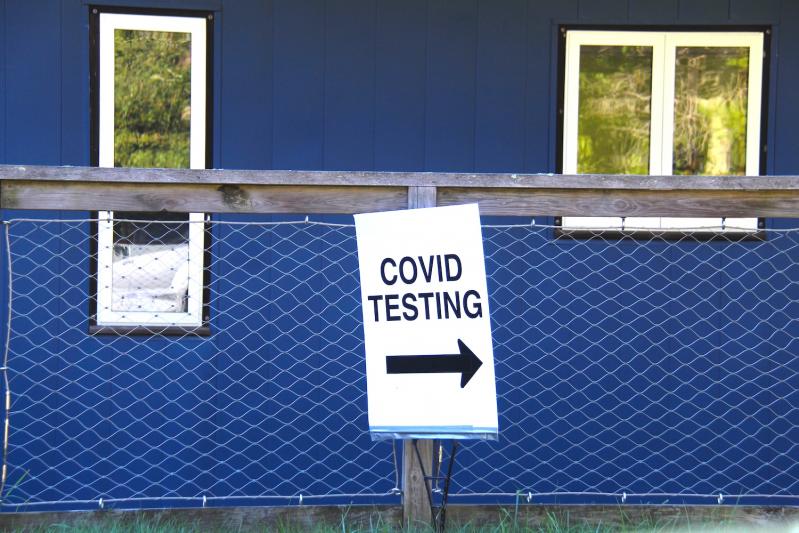 The CareONE Concierge Covid-19 test site off Stephen Hand's Path is open on Wednesday and Friday from 11 a.m. to 5 p.m., with results typically available the following day.
Durell Godfrey
By Christopher Walsh

The decision by CareONE Concierge to continue offering Covid-19 testing in East Hampton Town reflects yet another uptick in transmission of the coronavirus that has killed nearly one million Americans.

A decision to close the site at the former Child Development Center of the Hamptons on April 1, after the volume of residents seeking tests had fallen to below 25 per week, was reversed as concerns about the virus’s BA.2 subvariant and the April school break sparked renewed demand for tests. Testing was to continue at least through Friday, April 15, before a reassessment of conditions and demand.

“We are going to continue to be open for the foreseeable future,” Dr. Jason Cavolina of CareONE Concierge said on Monday. He cited the approaching summer season and the subvariants of the virus’s dominant Omicron variant. The subvariants are proliferating, “especially in New York,” Dr. Cavolina said.

At the CareONE Concierge site, none of the 47 tests given between March 6 and 12 were positive, a milestone seen only one other time, between Feb. 14 and 20, when 79 were tested. But three of 55 tested between March 13 and 19 were positive, a rate of 5.45 percent. Just one positive test was recorded at the site in each of the following two weeks, for positive rates of under 3 percent.

The CareONE Concierge site is open on Wednesday and Friday from 11 a.m. to 5 p.m., with results typically available the following day. “If the volume goes up to, say, 100 on either day, we will probably go back to opening on Monday,” Dr. Cavolina said. The site was open, with expanded hours, on Monday, Wednesday, and Friday from early February to March 23. Before that, the site had been operating six days per week.

But official statistics almost surely undercount the rate of transmission, given the home use of rapid tests and oral therapies. “Statistics are definitely undercounted because we are clearly not counting any of those households,” Sharon Nachman, chief of the division of pediatric infectious diseases at Stony Brook Children’s Hospital, said of those testing positive, and hopefully isolating, at home.

“They may be getting sick. But we’re certainly not hearing about them because they’re getting prescriptions from their primary care physicians.”

A federal judge in Florida struck down the mask requirement on public transportation on Monday, shortly after the federal Centers for Disease Control and Prevention had extended it through May 3. Dr. Nachman said that, while “there is never a good time to unmask on public transportation,” we must nonetheless “pick a time and see how it goes, recognizing that we may need to change our mind.”

Given the undercounting, “there are many more cases out there,” Dr. Nachman said. A count of those hospitalized with Covid-19 “doesn’t tell us about those getting treated and preventing their hospitalization. So there is no right answer to lifting mandates on public transportation.

Of a return to masking in schools, Jeff Nichols, the superintendent of the Sag Harbor School District, said last week that conditions will be monitored and that the district will “take our cues from the Suffolk County Health Department and New York State Health Department. . . . We’ll adjust as we need to.”

“I think we need to acknowledge that the Covid cases in the community are going up,” Mr. Nichols said. “The good thing is if you go to the C.D.C. website and put in ‘Suffolk County,’ it’s still classified as low-risk, but the conditions on the ground are changing.”

In public places, those with compromised immunity “should be encouraged to think about wearing a mask,” Dr. Nachman said, citing such patients who got sick despite being vaccinated. Those unvaccinated should also consider masking, she said, as should those with an elderly parent or grandparent, or a new baby, in their household. Also, “we should never be mask-shaming those who elect to wear masks,” she said. “They may have specific reasons that they’re wearing a mask, one of which may be anxiety. And that’s okay.”

Dr. Nachman agreed that successive variants, while increasing in transmissibility, are tending to cause milder illness. “But that can change in a heartbeat,” she said, “and we have to be prepared for the possibility of that. We can’t afford to relax.” With that said, “I think we’re moving into the endemic phase” of Covid-19. “The variants are now widespread — people are used to living with them. We have rapid testing that’s done in the house and available oral therapies for adolescents and adults.”

An annual or semiannual booster dose of the vaccine is likely to become a permanent component of public health, like the annual influenza vaccine, she said. “That wouldn’t be the worst thing in the world and may be incredibly positive. If we could prevent disastrous surges in hospitalization and death by an annual vaccine, let’s take it. That’s a win for all of us.”

With reporting by
Christine Sampson