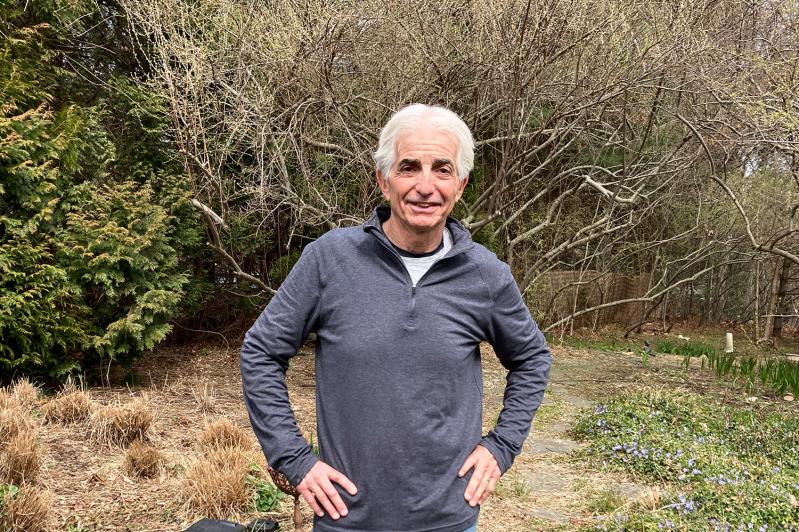 As the new president of the East Hampton Trails Preservation Society, Irwin Levy plans to continue partnering with other organizations to offer walks that delve into history, art, and culture as well as the natural world.
Irene Silverman
By Irene Silverman

“There was never going to be a lawn, or irrigation,” said Irwin Levy, gazing out with a satisfied smile over his untamed backyard. “I didn’t want that whole UpIsland suburbia.”

Mr. Levy is clearly delighted not to be working “65 hours a week” any more, except when called upon to consult with Terminix, which bought the pest control business he owned and operated in Great Neck a year or so ago. Now in his 60s, happily settled full time in Springs in the house he and his wife bought in 1989, he finds himself filled with a sense of tradition and place wherever he walks, which is almost everywhere. If his name seems familiar, it could be because, when he’s not holding forth on the town’s nature preserve committee or Facebook about some grinchy plan to tear down a stand of trees or some venerable building, he leads hikes for the East Hampton Trails Preservation Society or shepherds people through the gardens of the LongHouse Reserve. (He’s “passionate” about LongHouse, he said, and loves being a docent there, but he declined to speak about its recent tribulations. “That’s way above my pay grade,” Mr. Levy said politely.)

He joined the Trails Preservation Society in January and led a wildly successful hike the next month through the studios of the late Abstract Expressionist artists James Brooks and Charlotte Park and their 11-acre surroundings off Neck Path in Springs. “Brooks-Park had almost 150 people!” Mr. Levy exulted. “We lost count, we couldn’t count them all. A lot of them were artists — we created this hike at the intersection of art and nature. And [the trails society] got new members from that.”

Not long after, he said, a lightbulb went off. If nature and art could connect so fruitfully, why not nature and history? From there, “It took on a life of its own. I’d Google the history — Duck Creek, Egypt Lane — and then I reached out to organizations.”

“I like to have a lot of balls in the air,” he said, “and now that I’m not working, I have the bandwidth.”

Members of the trails society had led hikes related to local history be fore — the old Peach Farm in Northwest, homestead of the long-gone Ranger family, is one example — but not in collaboration with knowledgeable co-leaders representing other groups. “I started trying to hook up with as many as I could,” Mr. Levy said.

Soon he was off and running (make that walking), starting with one of America’s earliest known Black summer resorts in the company of Dr. Georgette Grier-Key, the executive director of Sag Harbor’s Eastville Community Historical Society, who led 35 people from the trails society through the cemetery at St. David A.M.E. Zion Church and on into Azurest. After that, hikers walked the length of Wainscott Main Street, with Esperanza Leon of the four-month-old Wainscott Heritage Project pointing out its school, cemetery, and open-water vistas. Coming up on Wednesday, after hearing about the “history, lore, and unique tales” of Amagansett’s Quail Hill Farm from its director, Layton Guenther, hikers will explore the nearby trails of Stony Hill, guided by trails society members. Other destinations in the works include the East Hampton Farm Museum and a Springs Historical Society-led walk through that hamlet.

“These collaborations — walks with a message provided by other groups — it’s, like, a winning formula,” Mr. Levy said. “Don’t get me wrong, I love walking the trails, too. But it’s a different outlet, combining a walk with a historical perspective. The point is, it becomes a win-win; it raises awareness for both the organization and the trails society.”

“We’re tracking a new audience,” he said of the society, “wanting to raise our profile. Because of the pandemic, we’ve had very large attendance, because it’s outdoors. And these walks also give you community, in a safer environment.”

Next month will be a big one for Mr. Levy. He and Ms. Leon are starting a podcast together called “Our Hamptons,” to talk about “the missions of these organizations and the development pressures. Hopefully, it’ll be interesting enough for people to want to drop in on.” Also, he’s up for membership on the Springs Citizens Advisory Committee, awaiting town board approval, which should come through around midmonth — by which time he will be at the helm of the trails preservation society itself, having been elected its president on April 5.

A Conference for Young People to Create Solutions
Get Outside, Get Moving
Two Traditions, One Fair in Springs
END_OF_DOCUMENT_TOKEN_TO_BE_REPLACED