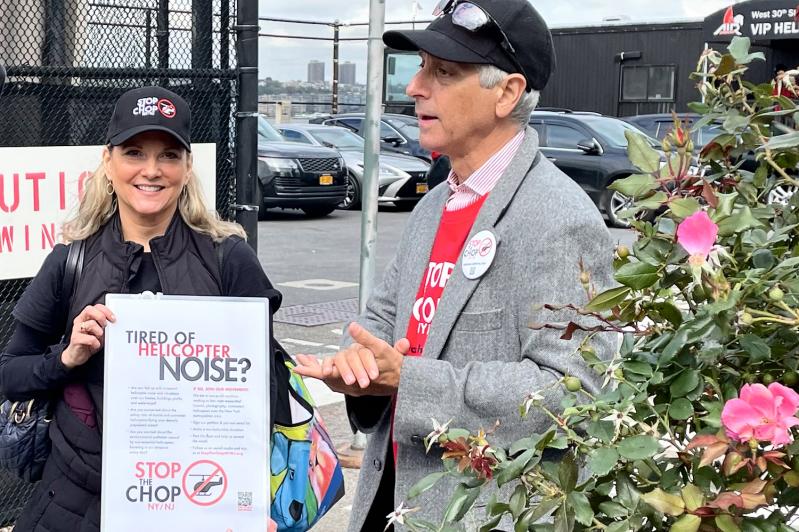 Melissa Elstein and Andy Rosenthal of Stop the Chop, a Manhattan organization that seeks to ban nonessential helicopter flights, including those to and from the South Fork
Eric Katzman
By Judy D’Mello

It has been reported that the billionaire Ira Rennert owns two helicopters, one of which is a luxury version of the twin 2,520-horsepower engine, 19-seater Sikorsky S-92, one of the world’s most powerful civilian choppers, which he often uses for weekend jaunts from Manhattan to his 63-acre complex in Sagaponack.

“The dishes in my dish rack rattle,” said Andy Rosenthal, a resident of Manhattan’s Upper West Side and the president of Stop the Chop, an organization seeking to end nonessential helicopter flights, including air shuttles to and from the Hamptons and tourist flights over the five boroughs. “I wake up to it. I go to bed to it. In the middle of the night, at 2 a.m., my apartment vibrates. Most of the helicopters that are used for the Hamptons groups are bigger than the tourist helicopters — they vibrate. My whole apartment vibrates when they go over,” he said over a recent Zoom call, on which Melissa Elstein, the organization’s coalition organizer, board chair, and secretary, was also present.

Mr. Rosenthal, a retired Wall Street executive, and Ms. Elstein, a yoga teacher, retired lawyer, and fellow Upper West Sider, have been ever-present voices in the ongoing battle over the potential closure of East Hampton Airport. Mr. Rosenthal is a regular attendee and speaker at East Hampton Town Board meetings. Ms. Elstein has been in regular communication with East Hampton’s board since 2019, when she wrote a letter stating, “For the first time in 20 years, the people of East Hampton have a say in the future of not just the East Hampton Airport, but of our regional skies, the air we breathe, and the water we drink.”

The issue of noise and environmental pollution caused by air traffic to and from the South Fork is decades old but one which has intensified over the last few years as air traffic between the two routes has increased dramatically.

As the busy summer months approach, helicopter commuter rides between Manhattan and the Hamptons are again a focus. In 2019, a study presented to the East Hampton Town Board showed a 7-percent increase in helicopter traffic at East Hampton Airport between the summer months of 2018 to 2019. These low altitude-flying aircrafts emit a particularly loud thwacking sound and vibrations, and, not surprisingly, drew the most complaints for noise pollution, according to the study.

Companies such as Blade and the Associated Aircraft Group, which operates Sikorsky helicopters to the East End, have begun advertising their “10-pack” deals for the frequent chopper commuter to the Hamptons. Uber, the ride-sharing app, recently launched Uber Chopper, which is currently limited to New York City airports, but the company has said it intends to expand its flight path.

“I’m out in Orient, at the end of the line on the North Fork,” said Adam Irving, during a phone call on Tuesday. “In theory, we’re quite a ways from East Hampton, but in the aviation world you can be neighbors quite quickly. And that’s kind of how Orient is impacted. We get the noise. If they cut over land, we get the noise. If they fly along the water, along the Long Island Sound, we also get the noise. Unfortunately it’s the sort of low frequency, base noise that comes from these twin-engine helicopters and it can literally travel for four or five miles depending on the wind conditions,” he said. Mr. Irving has also been present at many of the East Hampton Town Board meetings on the airport, expressing his wish to see the airport permanently closed. For him, reducing helicopter flights isn’t a solution. He used the analogy of telling your doctor you smoke three packs a day but promise to cut that by 40 percent. “That’s still like 1.7 packs a day, which the doctor’s probably going to tell you is still a problem,” he said.

Mr. Irving, a financial investor, said he got involved after the Eastern Region Helicopter Council, a pilot advocacy group, began redirecting twin-engine helicopters from the city and the Hamptons over the “causeway — the one mile, very thin strip of land that connects east Marion to Orient,” he explained and then added, “Oh yeah, it’s also my front yard.”

Barry Raebeck, a Wainscott resident and co-founder of the Quiet Skies Coalition, described the mental impact of a helicopter’s sound: “Anyone in this culture associates helicopters with something bad — a war or an emergency — and when you hear that ‘whomp, whomp, whomp’ getting closer, it’s very stressful.”

Mr. Rosenthal and Ms. Elstein of Stop the Chop are not looking forward to the busy summer ahead. Even as the East Hampton Town Board looks to rein in air traffic by shifting the airport to a private-use facility with advanced authorization required for takeoffs and landings, for them, hope rests with the passing of the Improving Helicopter Safety Act, a federal bill introduced by Congress members Carolyn Maloney, Jerry Nadler, and Nydia Velazquez that will prohibit nonessential helicopter travel over large cities such as New York.