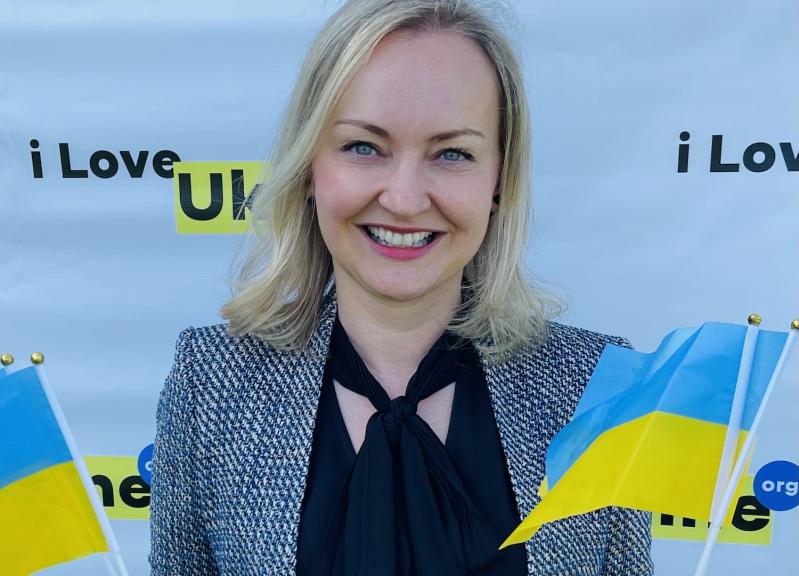 Natalie Massa has engaged local businesses and worked since February to help the citizens of Ukraine displaced by the war.
iloveukraine.org
By Christopher Gangemi

A year ago, Natalie Massa couldn't have guessed that she'd be the chairwoman of a nonprofit organization, iloveukraine.org, donating money to orphanages in Kyiv. But the world changed when Russia invaded Ukraine on Feb. 24, 2022, and for many who grew up there, and whose families remain, watching events unfold without helping was impossible.

“I remember spending summers with my grandparents in Pluzhne, near where I grew up in Khmelnitsky,” said Ms. Massa in a phone conversation. “In the evenings we’d sit on the veranda, and they’d tell us their stories from World War II. I could never imagine that my generation would be telling similar stories to their children and grandchildren.”

By March, East End Ukrainians had found one another and begun organizing donations of physical items, bandages, clothing, medicine, and more. Local churches of all faiths helped collect and store goods. Ms. Massa, who has lived in the United States for 20 years, and in Southampton for the last two, made a Facebook post seeking help. The response was immediate.

“In two days, we received donations to pack up a big van.” She began working with local schools to organize more.

By the end of March, she had already shipped 2,000 pounds of supplies directly to Ukraine. Since its inception, iloveukraine.org has shipped 16,500 pounds of humanitarian aid.

“The Greek Orthodox Church in Southampton let us use their basement to store the donations. It was flooded with items. They funded our first transportation cost to send goods to Ukraine, and they’ve continued to support us,” she said.

In late spring, she visited local schools to make crafts and educate children about Ukraine’s history. “I always wanted to work with children, and this way it combined both things, working with children and helping Ukraine,” she said.

“We attached the crafts to the donation boxes we sent. It was heartwarming. We spoke about the history of the Soviet Union. A lot of people think Ukraine is a new country, but it’s hundreds of years old, and the whole time has been fighting for freedom.”

Ms. Massa leveraged her background in finance and project management and created the nonprofit so that financial contributions could be tax-deductible. It took her only three weeks to launch. She runs it with her husband, James Massa, the chief technology officer, and Brittney Epley, the head of fund-raising. Through the summer she helped raise awareness for her project with a podcast, aired by LTV.

“In the beginning, the supply chain in Ukraine was broken, so we focused on shipping goods where they were needed. By the summer, economic operations in Ukraine were somewhat back to normal and transportation got very expensive. We changed course. Now we focus on financial donations and working with people we trust in Ukraine,” she said.

“A dollar goes further in Eastern Europe than here,” she added, “but it’s hard to run an operation in a country with a raging war. I can’t supervise every transaction. We work with people that we knew before the war began, and do our own due diligence.”

The goal is to help refugees and civilians who are struggling in Ukraine. Ms. Massa says they concentrate on refugees who have fled from the destroyed eastern parts of the country to central and western sections.

If you think summer crowds are oppressive, consider that Ms. Massa’s hometown of Khmelnitsky went from a population of 250,000 to 550,000 overnight. The 300,000 new residents aren’t wealthy vacationers, either — they’re desperate, in need of lodging, food, clothing, and jobs.

“Lots of people have nowhere to go. Their old homes have been bombed. It’s not safe to return.”

One particularly large donation allowed iloveukraine to partner with a charitable foundation, the Future of Polissya, in Kyiv, to buy an ambulance. “We bought the used ambulance in France, equipped it so doctors could use it to do basic surgeries in the field,” drove it to Ukraine, “and donated it to Kharkiv,” she said, speaking casually, as if you might tell a friend about your weekend.

Recently, financial donations paid for 2,500 pounds of food delivered to the village of Demydiv, which flooded itself by blowing up a dam so Russian soldiers couldn’t advance. “It was particularly heartbreaking, because the people of that village are farmers. Because they flooded their fields, they couldn’t farm. Our partners said the waters recently retreated, but there are still wet spots.”

They’ve also collaborated with Blagomay, a charitable fund, to buy 300 sets of linens for orphaned children in Kyiv.

“I’ve learned that what we might think Ukrainians need is different from what they actually need. It’s important to ask what they need. Our lists are constantly changing,” Ms. Massa said.

Do those lists include holiday cheer?

“For the holidays, we’re working on a food distribution project. We will donate money to Future of Polissya for them to purchase nonperishable food items that people can use easily without gasoline or electricity. Right now, we’re still focused on necessities, no festivities.”

“I’m hopeful that the war will end. I cannot change the political situation, but I’m doing what I can from here,” she said. “It’s going to take a very long time for Ukraine to rebuild itself even if the war ends. Every day I wake up, I’m still in disbelief.”