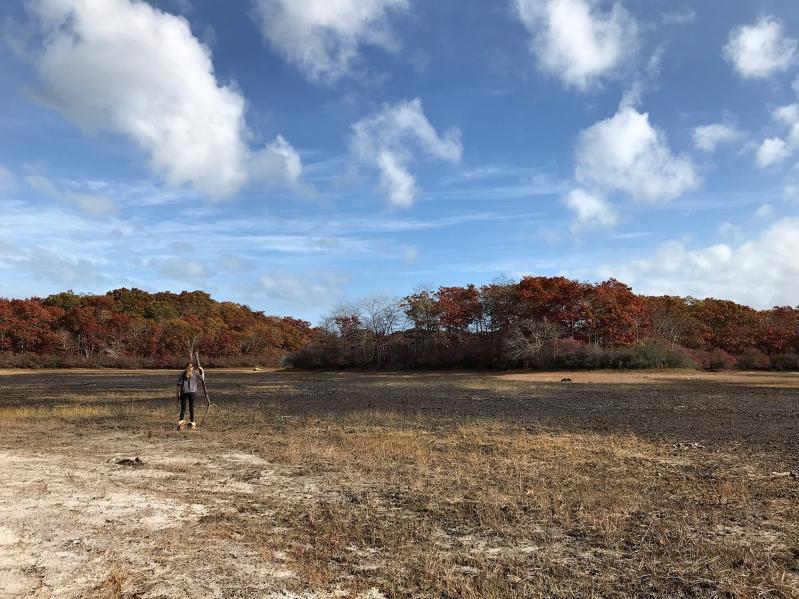 While Lake Mead, the largest reservoir in the United States, has made news as it dries up because of drought, revealing human remains and other mysteries, it seems far away, and not our worry. However, our local ponds are also imperiled by recent drought conditions. The abnormally low water table and the spread of invasive species are combining to threaten the long-term health of the East End’s coastal plain ponds.

Outside of Montauk, one of the largest swaths of green is the Long Pond Greenbelt, a perfect spot for a post-Thanksgiving jaunt. There, well-established walking paths wend their way around a series of coastal plain ponds that extend from Sag Harbor south to Sagaponack.

Some of those ponds are completely dry, and many are lower than they have been for a long time.

“The ponds are very, very low,” Dai Dayton, president of Friends of the Long Pond Greenbelt, said via email. “It is a cycle, but this is one of the lowest years I’ve seen,” she said. “Let’s hope this is just the cycle and not all the new houses with irrigation systems, pools, and multiple bathrooms wasting the water.”

Coastal plain ponds are partially fed by groundwater, so Ms. Dayton’s concerns about the health of the aquifer, and the role it plays in maintaining pond levels, deserves some exploration.

Since the end of July, the South Fork has been locked in a moderate drought. During August and September, the area was in a severe drought. As a result, the water table is very low.

“Towards the end of last year, we began to get into a drier than normal period that has persisted through the summer and into the fall,” said Ronald Busciolano, a supervisory hydrologist with the United States Geological Service. “While not as severe as the drier-than-normal period from 2015 to ‘17, or the benchmark 1960s drought, there have been some significant declines in groundwater and surface-water levels across Long Island,” he said.

A water table aquifer well near Southampton with a record going back to 1950 shows the depth to the water level below land at about 12 feet. During the drought of the 1960s, it was only a foot lower. While we are not in a historic drought, the water table is near historic lows. As Ms. Dayton hinted, lack of rainfall isn’t the only problem for the aquifer. Irrigation systems are also sucking it dry.

“We reached near a 40-year low in that well in September,” said Mr. Busciolano.

The Star reported through the summer on the drought, noting that lawns were green, nonetheless. The Suffolk County Water Authority urged residents to irrigate less, but those entreaties were largely ignored.

Coastal plain ponds do recede and fill again. They are relatively shallow, with gradually sloping shorelines. They were formed when retreating glaciers left huge hunks of ice, creating depressions with low points below the water table. Precipitation accounts for about 5 percent of their water and runoff accounts for another 20 percent. Groundwater is thus crucial to their survival. During low water seasons, a wide margin of shore develops around the shrinking pond and fills with plant life.

“That’s what makes them so interesting,” said Mr. Ash. “This is a fortuitous time for plants, which remain dormant when the water levels are high. When the ponds get this low it gives the plants an opportunity to bloom and go to seed. It’s one of the reasons the Long Pond Greenbelt has some of the largest accumulations of unusual plant species not just in the state, but globally.”

The greenbelt hosts a whopping 46 species of plants found only there. As a comparison, were you to climb a mountain in the Adirondacks, another hub for rare species, you’d find 31 species of plants that grow only at such heights. Perhaps because of its accessibility, we take the greenbelt for granted, but it’s a special place.

However, invasive plants also benefit from the dry pond shores. Should the ponds remain abnormally dry for a long period, they take root, expand, and push out more of the rare native plants that rely on that habitat.

One invasive that has increased its range on Long Island in the last 30 to 40 years and is present in the greenbelt is phragmites. If the ponds can’t replenish because of a lower water table, without control, phragmites will flourish.

“As the depth of the water becomes reduced in the ponds it allows the phragmites from the shore to extend farther out into the pond,” said Bruce Horwith, a conservation biologist.

Mr. Busciolano was hopeful that the next few months would help recharge the aquifer. “Seasonally there’s a cycle. In winter and late fall, water levels start to go up. Once people begin irrigating, the aquifer starts to decline. The key is how much do we rebound during these next two seasons. Do we start at a much lower level next year? If we do, what happens if we have a dry summer?”

“We have to decide what’s an acceptable reduction in surface water features that depend on the aquifer,” he said. “For example, as the water table declines, is it sustainable to dry out a pond to keep your lawn green?”

“Lawn isn’t native here,” said Mr. Horwith. “To grow it at the exclusion of everything else requires irrigation, herbicides, and pesticides. It’s an incredible cost to our environment. The lowering aquifer is a problem that’s not going away even after this drought ends, because we’re draining it faster than it can be replenished. On Long Island, it’s our sole source of water.