Leaving a light layer is good for your lawn 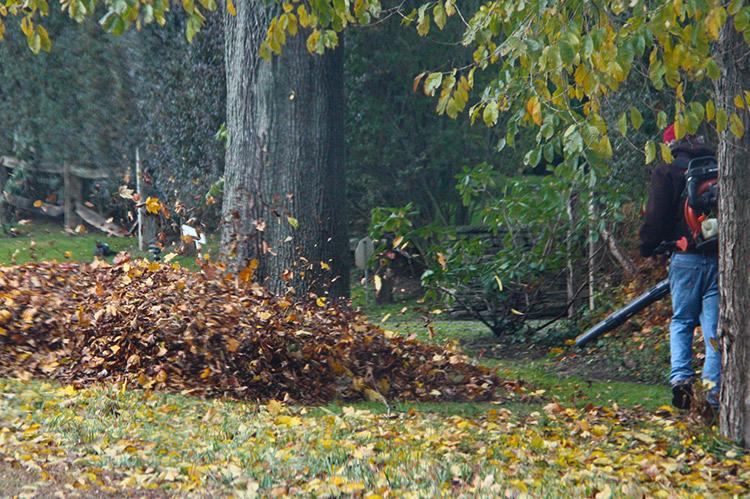 On the South Fork, it seems the moment a leaf falls to the ground it becomes a nuisance to be blown, corralled, and carted to a landfill.

This is not good.

According to the Environmental Protection Agency, “Yard wastes account for nearly a fifth (over 31 million tons) of all garbage generated in the United States each year, making yard wastes the second largest component (by weight) of the municipal solid waste stream.”

Was it always so? Mounds of leaves recall childhood and Linus destroying Charlie Brown’s pile, simpler times before the advent of the leaf blower and the industrialization of the lawn.

Why have homeowners become seemingly obsessed with removing leaves from their properties? Turns out it’s not only a business model, but psychology and fashion play important roles as well.

An owner of a local landscape company wasn’t interested in talking about the psychology of his clients, but his secretary quietly reported two reasons why leaves are the enemy.

“It’s very important for our clients’ properties to be absolutely immaculate in case they are entertaining. There’s also a competitive element to it. They see their friend’s property blown clean, and they want that too. Everyone wants Edward Scissorhands out there trimming their lawn and hedges. If they don’t get it, they’re upset. That’s just how they are. If there’s a leaf out of place, they complain.”

Unfortunately, our needs to entertain, and Instagram our backyards, are directly opposed to nature’s needs, which are to provide shelter, food, and water for living things. Soil, birds, insects, and ecology in general, suffer from the current landscape fashions.

A walk on local trails is made noisy by a brown layer of leaves, all sizes, that blurs the distinction between trail and woods. The trees know that soon it will be cold, and the leaves are the blanket that will protect their roots through the winter. Leaves don’t pile up in the woods; they become part of the soil. The cycle works perfectly when we let it.

“In some ways, what people see as beautiful needs to be modified a bit. Once they understand what a dead landscape is, it doesn’t look that good,” said Edwina von Gal, founder of the Perfect Earth Project.

“They should leave their leaves on their property,” said Tamson Yeh of the Suffolk County Cornell Cooperative Extension. “Leaf blowers are terrible for soil structure; they kill roots and beneficial insects. Leaves provide organic matter that holds the soil together and makes it absorbent,” she said.

Another reason to leave leaves be? “Insect populations are in freefall,” says Leonard Green, of ChangeHampton, a “community brigade” dedicated to promoting “restorative, bio-diverse, healthy, and sustainable landscaping practices.”

“It’s horrifying. They’re calling it the sixth great extinction,” he said, in a phone call. “We all know that bird populations are in trouble, but the rate of extinction for insects is eight times faster than that of mammals, birds, and reptiles,” he said, quoting a Biological Conservation report from 2019. Additionally, the report says that over 40 percent of insect species are facing extinction.

“Most of the time, homeowners don’t want to think they’re killing butterflies and moths, but by removing their leaves, they’re doing just that,” said Ms. Yeh. Childhood favorites like the lightning bug, “woolly bear” caterpillars, bumble bees, luna moths, and swallow tail butterflies are just some of the beneficial insects that use leaf litter to overwinter.

“It gives them insulation and provides moisture,” she said.

If the insects go, so will the birds. Almost all of them rely on insects to feed their nestlings in the spring.

Yes, ticks, the great scourge of the East End, also overwinter in leaf piles. Ms. von Gal has an easy solution. “Don’t roll around in the leaves, and stop overwatering.” Ticks need moisture to survive. Irrigating sod allows ticks to work their way onto your lawn.

Odds are if the sixth great extinction isn’t enough to influence change, the health of the guys operating the leaf blowers may not do it either. “They’re subjected to a consistent din of 100 decibels,” said Mr. Green. “It’s terrible for their health. They’re breathing volatile organic compounds, benzene, and other carcinogens, not to mention all the particulate matter they’re blowing around,” he said.

So how can you make friends with leaves? Shrinking your lawn is one way. Create native plant beds where a three-inch layer of leaves creates a nice winter carpet, experts say.

“Ask your landscaper to use a mulching mower, instead of blowing and collecting leaves,” said Ms. von Gal. “By removing leaves, you’re taking the food out of your landscape’s mouth and then relying on synthetics to put it back. It’s the landscaper’s business model. You don’t need to buy fertilizer. It’s on your property. It’s your leaves.”

“It’s the hardest thing,” she said, of communicating a novel and currently unconventional idea to landscapers.

More advice: Don’t mow or rake around your trees. Let that area be. “Make it look like it’s intentional,” said Mr. Green. “Make clearly defined pathways so it shows you’ve designed what you’re doing and it’s not laziness.”

“I’m not anti-lawn,” he said. “It’s great for recreation. But most people have lawn we can sacrifice. Rake your leaves into a woody area of the yard. Rake them into plant beds. Leaving a light layer of leaves on your lawn is actually healthy for it and the soil beneath.”

“Honest people do care, they just don’t understand what they’re doing,” said Mr. Green. “We’re destroying the ecosystem and then we wonder why the environment is crashing, why we have algal blooms in our ponds.”

Until people start to like lightning bugs and butterflies as much as they like to impress their friends, leaves won’t stand much of a chance. More information can be found at the perfectearthproject.org, under the resource tab. “The Basics of Nature Based LandCare” is located there, in Spanish and English, and can be printed to ease understanding.