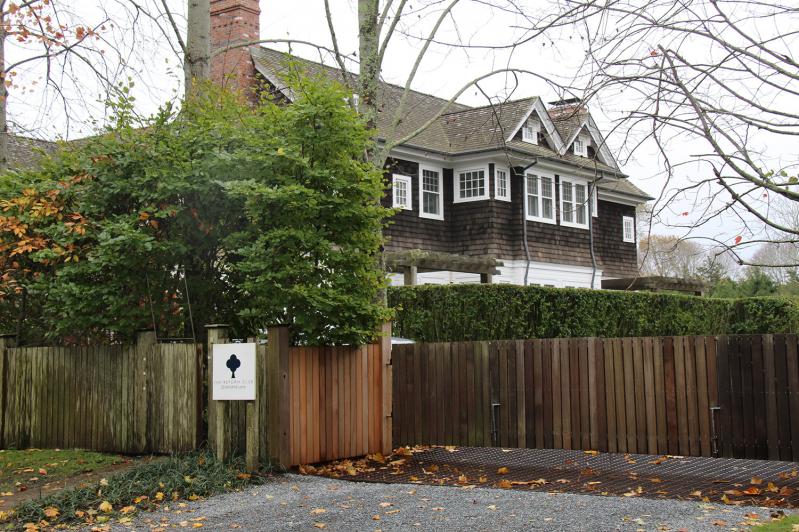 The Reform Club operates on five acres on Windmill Lane, with rooms and suites going for $770 to $2,000 a night.
Durell Godfrey
By Tom Gogola

Reform Club, reform thy ways: That was the message Monday night at the Amagansett School, where the hamlet’s citizens advisory committee gathered for their regular monthly meeting — a big chunk of which was devoted to complaints about the boutique hotel’s hard-partying summertime affect and attendant parking and traffic problems.

The Reform Club has been in business on Windmill Lane since 2009, expanding its footprint over the years from two to five acres, adding an apple orchard and an adjacent property. According to its website, rooms and suites range from $770 to $2,000 a night. The establishment promises an island of big-ticket tranquillity and “your personal sanctuary for rest and relaxation.”

The tranquillity doesn’t appear to extend to the neighbors, or at least to Susan Bratton, an Amagansett resident and entrepreneur who lives near the Reform Club and registered numerous complaints about it on Monday.

Ms. Bratton cited what she said were several chronic and escalating safety and traffic issues associated with the hotel, which, besides the high-end accommodations, offers itself as a wedding venue for hire and a destination location for businesses or people who want to throw a party. The hotel has also hosted yoga clinics, trunk shows, and other events open to the public.

Ms. Bratton said the venue appears to have outpaced its original town zoning designation as a “boutique hotel with 11 accommodations and an equal number of parking spots.”

“It’s a beautiful community, and this is a beautiful space,” she said, “but I feel it has outgrown what it was approved for. It’s more of a disco now . . . I’m concerned about the increased volume in traffic, the people, the parties, and the noise. I remember when it was built, it was supposed to be a small inn, for sleeping.”

Her concerns replay a familiar East End refrain, pegged to safety and traffic issues in the high season. She said she’d seen a sizable number of observably drunken people happily leaving the facility, “walking up and down Windmill Lane,” some all the way to Oak Grove Cemetery, where they’d parked their cars. She suggested that the hotel consider using a party bus to ferry guests to and from events instead of relying on valet parking services.

Silas Liot, a guest services manager with the hotel, was in attendance Monday and took in the complaints, addressing a few of them even as he stressed that “I’m here as ears, and won’t make any specific commentary, except that we want to co-exist with the community of Amagansett.”

Based on past complaints from neighbors, Mr. Liot said, the hotel had already eliminated yoga and other classes, along with the trunk shows.

“We’ve gotten rid of those,” he said. Also, based on the complaints, the hotel is no longer hosting weddings in summertime, which he defined as July and August. “There were no summer weddings this year,” he said.

Ms. Bratton, the founder and C.E.O. of Savor Health in Manhattan, which provides nutritional guidance to cancer patients and others with chronic health problems, expressed sympathy for the business even while speaking of her problems with it.

“You guys have a business to run,” she said, turning in her chair to address Mr. Liot directly. “I totally get that.”

The hotel has taken other steps to be better neighbors, the manager said. For example, he said, guests can no longer park on the east side of Windmill Lane, across from the facility. Those spots are reserved for staff, he said, adding that the town had approved that solution. “If anyone does park there, we shut that down and tell them to move.”

Mr. Liot was also adamant, if somewhat haltingly, that the hotel did not approve of its guests parking at the cemetery. “I do agree that we have some people . . . they don’t listen . . . they feel like they own . . . out-of-town people, parking in the cemetery, we don’t condone that. In fact, we’ll run up the road ourselves and tell them to leave. It does happen sometimes, but,” he said, hotel guests might not be responsible. “We’re easy to target because we are the commercial business there.”

The Reform Club was historically a small inn at 23 Windmill Lane, before renovations and a renaming that began in 2006. Since opening three years later, the facility has added the next-door 21 House to its footprint, along with a three-acre apple orchard.

The Reform Club’s Chase Lerner, daughter of its billionaire owner Randy Lerner, told Forbes magazine in a 2021 profile of the hotel that “we have added a lot of land in the past few years. We went from having about two acres to five acres of space, which is really unique to have in the heart of Amagansett.”

Mr. Lerner’s renovation of the old inn was mired in controversy. According to The Star’s reports from the time, the property was extensively renovated without a site plan review by the town planning board.

East Hampton Town Supervisor Peter Van Scoyoc, the town board’s liaison to the advisory committee, did not directly criticize the Reform Club, but did liken the special-event activities there (which are subject to town permitting requirements) to “commercial events on beaches.”

“We are going to take a look at that,” he said, “and on putting some further restrictions on that.”