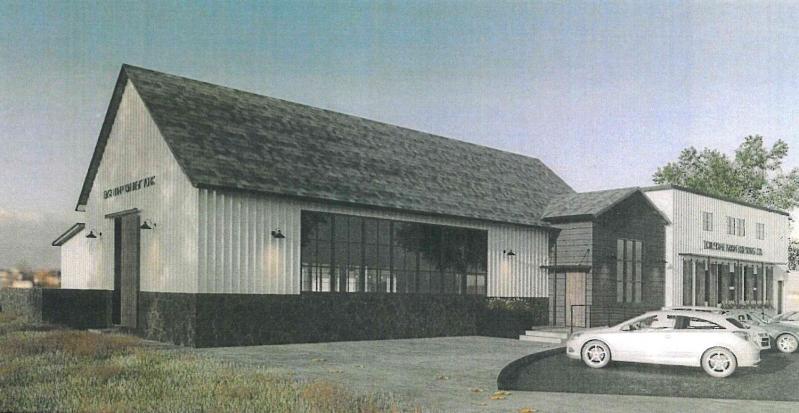 A rendering of the proposed brewery, which would be built at the site of a former furniture warehouse on Toilsome Lane in East Hampton.
Chaleff and Rogers Architects
By Christopher Gangemi

On Friday, Suffolk County Supreme Court Justice Carmen Victoria St. George said Michael and Christine Aaron’s attempt to stop a brewery from being built on Toilsome Lane in East Hampton Village was “not ripe,” agreeing with the village’s zoning board of appeals that an official determination on whether the brewery is compatible with the village’s code has yet to be made.

The Aarons and their lawyer, Michael Walsh, argued in a September 2021 appeal to the Z.B.A. that Mr. Preiato had made a determination, and they sought to have it annulled.

The zoning board took up the matter in January, and by March it had denied the Aarons appeal, saying that because no paperwork had been filed with the village clerk, Mr. Preiato had not made an official determination.

“To his credit, the village attorney told us the building inspector’s determination at the August 2021 D.R.B. meeting wasn’t formal enough. We spent 14 months banging around an issue that the court said it’s not ready to review. Now we’ll let the building inspector analyze the code section, prepare a memorandum, let him opine, and go from there,” said Mr. Walsh.

“Once I do issue a building permit, then they’ll have something to appeal,” Mr. Preiato said by phone.

Now that the court has sided with the zoning board, Mill Hill Realty can pick up where it left off at the end of the August 2021 design review board meeting.

“The D.R.B. acts like the town planning board does on commercial properties in the village,” said Mr. Preiato. “They’re the ones that ultimately have to approve the site plan.”

“The D.R.B. created a subcommittee to give us feedback and be our direct line of communication,” said Alex Balsam, a land-use lawyer speaking for Mill Hill Realty. “We have more details of the project to give them, and we’ll do that. We don’t really have a time frame. But even without the appeal, we were preparing for a long process.”

In a phone conversation, he highlighted the positives. “We’re back at square one. The good news is that at square one in 2021, we were unprepared. Since then, we’ve put together a great legal team, studied the law, and found we have a strong case. No matter the ruling this time around, it’s not zoned for a tavern, just a restaurant.”

A tavern is not defined in the village code. However, Mr. Walsh argued at a January zoning board hearing that if alcohol was secondary to food, he would consider the establishment a restaurant.

Mr. Aaron said they have already spent $80,000 on the case of which neighbors have contributed $30,000. “A lot of them have committed to continue helping,” he said. “For my part, I’m committed to go all the way, no matter what.”

His attorney, Mr. Walsh, said the next step is for someone in the village to make an official determination on what is allowed at the Toilsome location.

“The reason why we reacted with an appeal when we did was because when the building inspector appears in front of the D.R.B. and says a use is permitted, someone has to react. We saw no reaction on the part of the D.R.B. to the use itself,” he said. “If it has to be done in a more formal fashion as per the judge’s ruling, then fine, we’re going to request the D.R.B. address the issue of use and go from there.”

Both sides seem confident that their interpretation of the law is correct.

“When we have a building permit in hand, legally speaking, this whole process can play out again, which is not a scary proposition to us,” said Mr. Balsam. “From a legal standpoint we’re very comfortable with this project.”