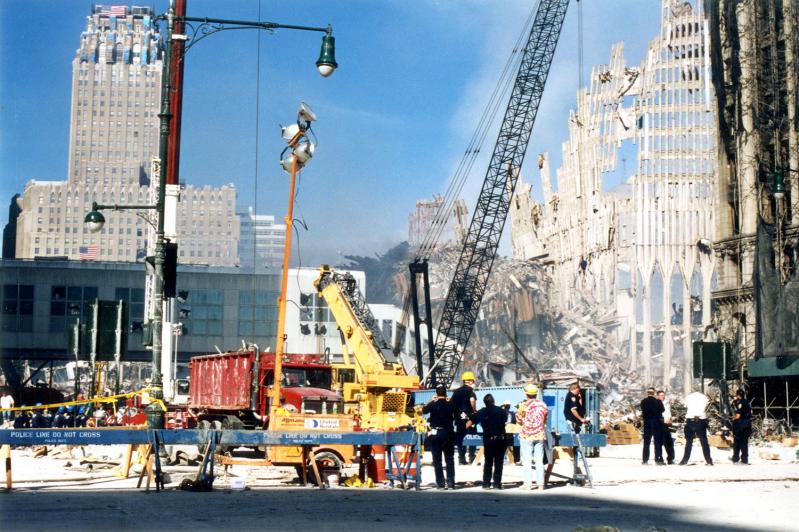 For Bradford Billet, like so many New Yorkers, the Sept. 11, 2001, attacks felt "very personal."
J.D. Samuelson
By Jamie Bufalino

After having served in New York City's Office of Emergency Management, for which he helped develop protocols for handling large-scale disasters, Bradford Billet, an East Hampton resident and executive director of the East Hampton Village Foundation, was working in the Mayor's Office of International Affairs in midtown Manhattan on Sept. 11, 2001.

"On that day, my staff and I were in the office at 8 a.m. because there was a special session of the United Nations General Assembly," he recalled. "I got a call from a friend of mine who was on a ferry coming from New Jersey when the first plane hit. We turned on the TV, and when I saw the volume of fire, I immediately said this is not a small aircraft, and this is not an accident. There's no way a plane flying that high up into the building was an accident. If it had been crashing, it would have been lower."

He and his staff had been listening to police communications, and saw live coverage of the second plane strike. "That happened around 9:03 in the morning, and we took one of our emergency response vehicles, and went 'lights and sirens' down to the scene."

He donned a jacket that identified him as a deputy commissioner in the mayor's office, and began directing police officers to help people in the vicinity to evacuate. "The first responders were effecting rescues in the buildings, and we were just getting people out of the area," he said. "About 15 minutes into it, the building came crashing down, and we started running. I vividly recall the building explode and come crumbling down; there was a moment of no sound followed by this unbelievable earth shattering rumble, and this cloud of dust and debris coming at you like a wave. After that, everything was the same color, whether it was a red fire truck or a blue police car, and you could smell the pulverized debris."

Covered in dust, he and his colleagues headed to a firehouse on Houston Street to convene with Mayor Rudolph Giuliani and his team.

In the days that followed, Mr. Billet helped oversee a program to locate people who had been injured, killed, or had gone missing. "At one point we had a list of over 20,000 missing people that we had to pare down," he said. "We had a solemn obligation to give the families closure."

He also helped out at the Family Assistance Center that was set up for relatives of the missing. "There were families who had difficulty getting information, and I would sit and talk to them, and I bonded with them. It was a very intense relationship that developed in a very short period of time. They felt a connection because I had been down at the site, so they would embrace you."

Mr. Billet led a delegation of first responders to a memorial held in London, and he was named an Officer of the Most Excellent Order of the British Empire for his work locating the missing and injured British citizens.

Many of the protocols developed to locate people following Sept. 11, 2001, are still used in the aftermath of large-scale disasters. "To this day, I give lectures on terrorism and emergency response, the lessons learned, and inter-agency cooperation," he said. "I knew about 40 or 50 people who had died, and have lost more friends since then to cancer and other things due to 9/11 exposure, so this was a very personal attack for me."