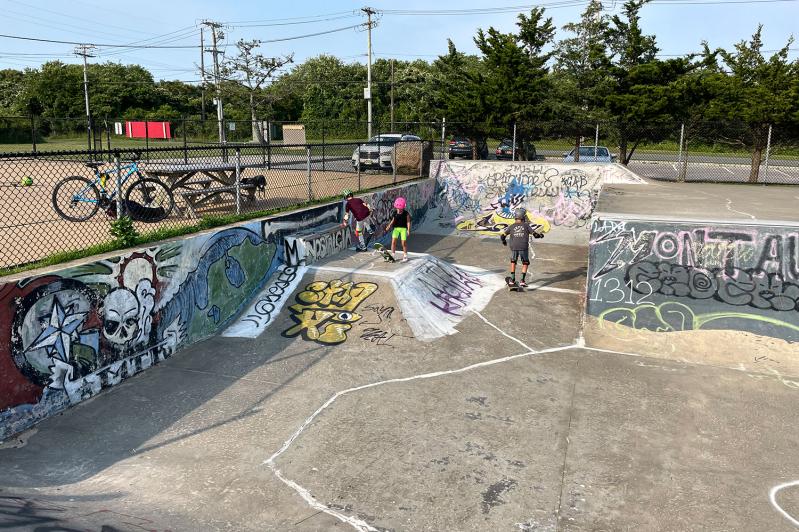 Fund-raising is underway for a major renovation and expansion of the skate park in Montauk.
Jane Bimson
By Bella Lewis

Striking a positive note in the lengthy process of grassroots fund-raising required before breaking ground on renovations and expansion of the Montauk Skatepark, the Montauk Skatepark Coalition said its mid-June art auction was a big success and that it is continuing its efforts through Labor Day.

"The auction went better than we could have hoped," said Bartholomew Schwarz of Montauk, who is using his expertise as a skater and photographer to collaborate with the park builder and designer, Tito Porrata of Pivot Custom.

Mr. Schwarz said about 70 of 93 pieces, among them custom-painted skateboard decks from members of the skate world, sold in an online auction that coincided with a masked reception at the Montauk Beach House, thanks to the creative director Walt Lindveld.

The park is owned by East Hampton Town, and Councilman David Lys, the board liaison working on the project, said the auction raised close to $90,000 toward the $1 million to $1.3 million project, which has been approved by both the town and the state. In order to raise more money before starting the renovation and expansion, the coalition is looking to begin work this fall or possibly in early 2022, he said.

"The pockets we thought we could count on haven't come in yet," said J.J. Veronis, a Montauk resident and skater who has donated to the effort and used his name in the skate and urban art world to mine the industry for supporters.

In March, he and Mr. Schwarz collaborated on a skate video exploring the park's history to help get word out about the upcoming renovations.

So far, over $725,000 has been committed to the project, including $260,000 from the Town of East Hampton. Donors will receive a plaque at the park and businesses who donate will get a badge of honor to display in their shop window.

With the help of the coalition's "champion fund-raiser" and East Hampton Town's parks and recreation director, John Britton, Mr. Veronis hopes that making the rounds to local businesses now in the swing of peak season will pay off.

These moving parts of fund-raising are the project managers' priority right now. By yesterday, a GoFundMe campaign set up by the Montauk Skatepark Coalition had raised nearly $32,000 toward a $500,000 goal, which the coalition hopes will push the fund-raising to over $1 million. Donations by check can also be sent directly to East Hampton Town at 159 Pantigo Road, East Hampton 11937, with "Montauk Skatepark" written on the memo line.

As of Tuesday, the coalition was within striking distance of raising $50,000 through the raffle of a customized mint-green 1960 Ford F150 pickup truck refurbished by Noble Fabrication of Ventura, Calif. The truck was donated by Mr. Lindveld, who won it himself in another raffle and is "passing on the good vibes," he said. Five hundred tickets were offered at $100 each; all but three had sold by Tuesday.

Mr. Schwarz said the coalition is giving itself until around Labor Day to complete all fund-raising. At that point, looking at what has been raised, it can then propose the final design for the project.

A community survey this spring gave the builders a sense of how the a la carte design could look. Plans include a pool bowl, flow bowl, and snake run. "Street course and street skating -- that was the main goal for me," said Mr. Schwarz, who hoped for local kids to have access to a course that emulated an urban environment with ledges and rails. "Kids don't even have a place to go out and vandalize here!" he joked.

The coalition is clear that people of any gender, at any level, and even older folks who find the current park too risky to skate are the target audience.

Information about the coalition's fund-raising efforts, proposed project plans, and Mr. Schwarz and Mr. Veronis's video on the history of the park can be found online at montaukskatepark.com.