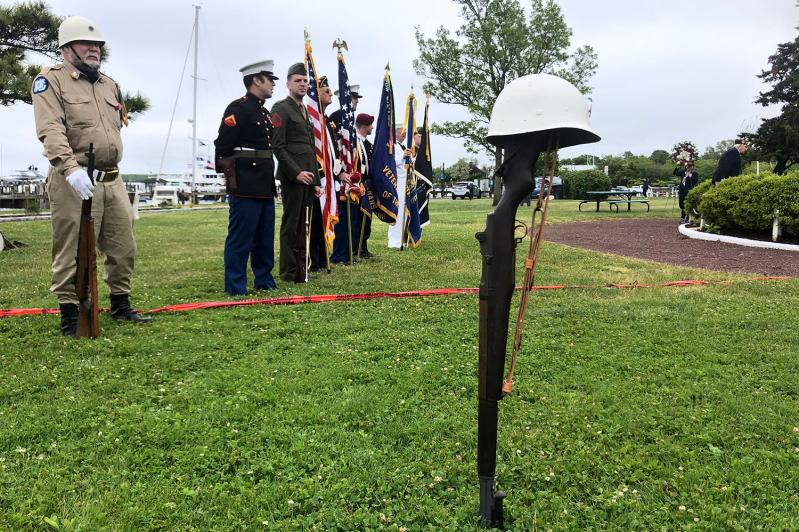 The Memorial Day ceremonies in Sag Harbor included a solemn acknowledgment of those who went missing during conflict in addition to those who were killed in action.
Christine Sampson
By Bella Lewis

"On Memorial Day, we wade in the deep waters of complex emotions -- sadness, grief, rage, guilt, loneliness, all side by side with appreciation, joy, and thanks, but most heavy of all, we must deal with loss," said Army Capt. Michael Dee of Noyac at Marine Park in the morning. "We can't deal with loss alone. We need support -- we need each other, and that's why we're here today. We are demonstrating as a community that we are here for those dealing with loss. . . . Your presence is a wonderful gift to give at a time of loss and grief and remembrance."

Outside the East Hampton Presbyterian Church on Main Street, Stephanie Forsberg, her husband, Carl, and their two little boys, Henry and Briggs, installed themselves in the bed of their Chevrolet truck to watch the parade. A 12th-generation East Hampton resident, Ms. Forsberg and her family were happy to return to the parade this year -- a family tradition.

The streets were not quite packed, and the parade itself had fewer moving parts than usual, but it still conjured "small town America at its best," said Town Justice Steven Tekulsky, who was off the bench that day, calling "left, left, left, right, left" as other members of the East Hampton Fire Department marched in uniform behind a restored antique fire truck.

After the procession down Main Street in East Hampton, Bill Mott, commander of the V.F.W. Post 550, gave opening remarks. "It's easy to forget Memorial Day isn't sitting by the pool looking ahead to summer vacation. Freedom isn't free. . . . It isn't just about honoring veterans, it's about honoring those who lost their lives and did not have the good fortune of coming home."

Gennaro Cavalieri, commander of American Legion Post 419 in Amagansett, recited the Gettysburg Address for a crowd of about 100 veterans and community members. He said that the famous speech was the genesis for Memorial Day, so it felt a fitting way to pay respects. The firing squad's 21-gun salute and original "missing man" ceremony were held in honor of serviceman James Lawler, who served in World War II. After returning to East Hampton, he participated in the rifle squad for 30 Memorial Day ceremonies. He died in 1980.

Mr. Cavalieri, who served from 1966 to 1977 as a radar operator for recover-and-refuel missions, said that he hoped for the Legion Hall to become more of a hub for family events as the world opens up again.

Mr. Mott, who also served previously as a commander of American Legion Post 419, explained that since everyone was waiting until the last minute on the governor's final parade guidelines, the plans had to come together quite quickly, in a matter of about 10 days. The former plane captain on the U.S.S. Midway, which is now a museum in San Diego, lauded the East Hampton Fire Department and town officials for how generous they were with their time, on the phones constantly, to make everything happen short notice.

Simultaneously, a few miles away in Sag Harbor, a parade of military men and women, police officers, and fire department and ambulance volunteers was led down Main Street by a drummer from monument to monument from Otter Pond to Marine Park. They stopped for a 21-gun salute at the foot of the Lance Cpl. Jordan Haerter memorial bridge and were welcomed at Marine Park by the Sag Harbor Community Band, whose patriotic songs marked its first public performance since December of 2019.

Roger King, commander of the Sag Harbor V.F.W. Post 9082, told the audience that "our republic has lasted so long due to those who are the firewall of sovereignty. A firewall of volunteers and drafted citizens to ensure all that comes before them for the nation they call home."

"There is nothing more hurtful than when someone says, 'Enjoy the long weekend,' when Gold Star families cannot enjoy any weekends with their loved ones," Mr. King said. "The lack of empathy and understanding of what makes America great is shown by those weak words. Every day we must as a nation . . . remember that we honor the dead by serving the living. Every day we need to remember the sacrifices because it is the military that enables you to enjoy a weekend without risking life or limb."

John Capello, a Navy veteran from Sag Harbor, and Maggie Smyth, the chaplain of the American Legion Ladies Auxiliary, were called upon to toss memorial wreaths into the waters off Marine Park.

Bill Stafford, the new commander of Sag Harbor's American Legion Chelberg-Battle Post 388, quoted the musician Bob Dylan: "A hero is someone who understands the responsibility that comes with his freedom."

"It was the unwavering devotion to our country's guarantee of freedom for all that motivated veterans to enlist in the military," Mr. Stafford said. "We are here today to honor those heroes and to profess our appreciation for the ultimate sacrifice [that] each one of them made in the name of freedom. Their love of country will live on forever."