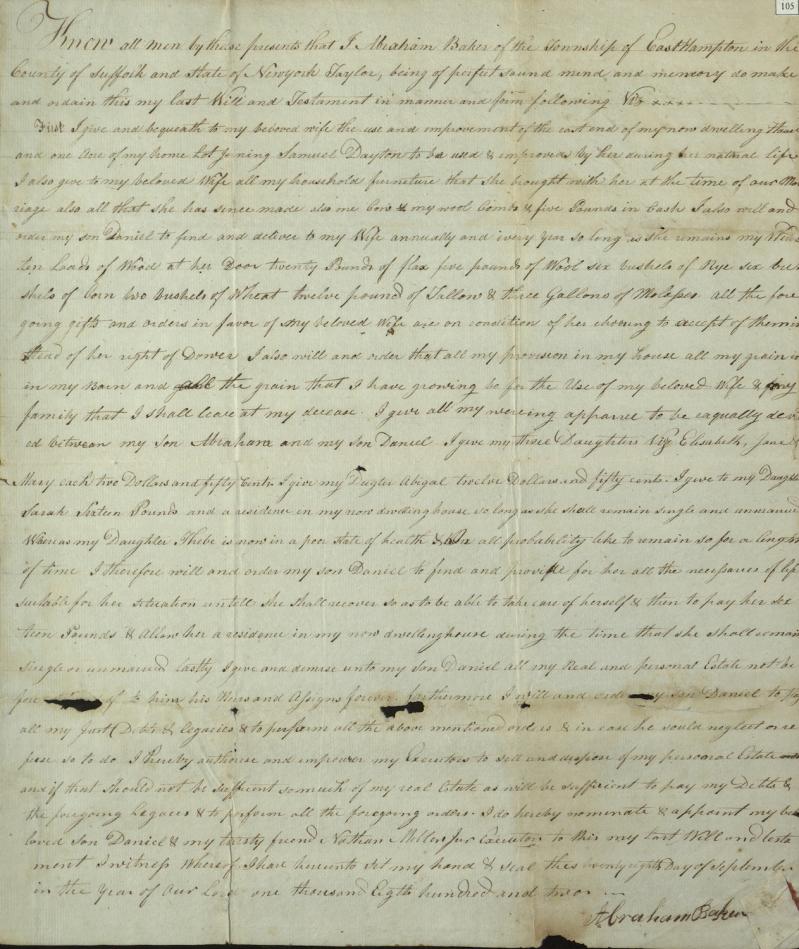 He bequeathed a significant portion of his belongings to his beloved wife, Lydia, but her inheritance reflected the limited inheritance of widows under English Common Law. Lydia inherited a life estate for only part of their current home, described as “the east end of my now dwelling house” and one acre of his home lot. Lydia was also granted all of the household furnishings she made or brought with her when she married Abraham. She received their wool combs, all the grain left in the barn, and a total of 5 pounds cash. He also instructed his son Daniel Baker (1755-1838) to annually deliver supplies to his widow, including wood and flax. His clothes were divided between his two eldest sons, Abraham Baker Jr. (1753-1827) and Daniel.

Abraham’s daughters Elizabeth, Jane, and Mary each received $2.50 in cash and his daughter Abigail received $12.50. His youngest daughter, Sarah, the only child from his second marriage, was left 16 pounds and a residence in his home as long as she remained single or unmarried. His daughter Phebe, who was in poor health at the time he wrote his will, was also provided housing and left in the care of her brother Daniel.

Daniel Baker and Abraham’s friend Nathan Miller were declared his executors. After he made these arrangements, Abraham lived another 15 years, eventually dying on July 11, 1817, at age 88. He was buried in East Hampton’s North End Cemetery, where his wife, Lydia, later joined him in 1828.