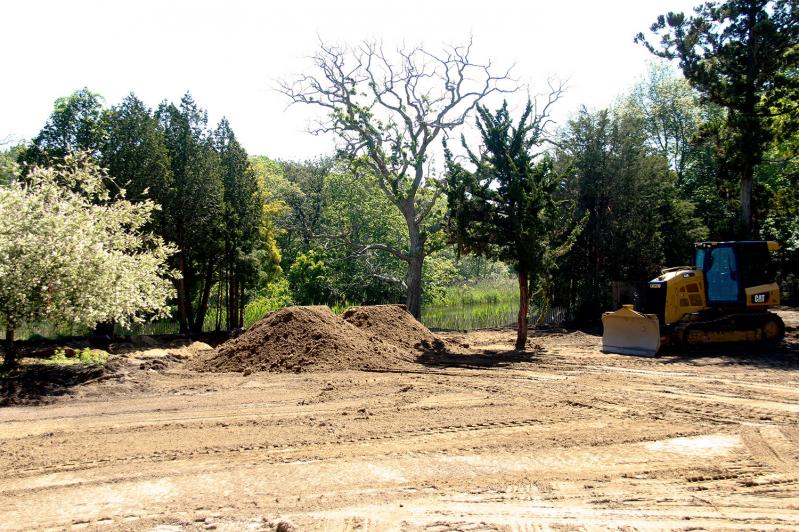 Once you saw it, now you don't. The Il Mulino restaurant in Wainscott was demolished last week, and the Peconic Land Trust is working to make the new preserve a passive park where people can enjoy the view of Georgica Pond.
Durell Godfrey
By Bella Lewis

Those curious about all the activity at the site of the former Il Mulino restaurant in Wainscott or perhaps surprised to see that this week the building there had disappeared could have had their questions answered at Saturday's Wainscott Citizens Advisory Committee meeting, when Kim Quarty of the Peconic Land Trust briefed the group on the new preserve at the head of Georgica Pond.

A donation from Katharine Rayner, who lives on the pond, made possible the land trust's acquisition of the Il Mulino property last summer. Ms. Rayner had seen water quality in the pond diminish greatly over the 40 years she has lived on it, said Ms. Quarty, the director of conservation planning at the trust, and she recognized that it was "causing real problems and killing off our ecosystems."

"We know a lot of it is nitrogen loading from septics in and around the pond, some of it is from acid rain, fertilizers, and a lot of it is stormwater discharge from the road there," but a big source of the contamination was the restaurant, she said. Though management changed over the decades, the septic system very close to the water did not.

After demolishing the restaurant building earlier this spring, the Peconic Land Trust began remediating the property. In partnership with Cornell Cooperative Extension, as well as Friends of Georgica Pond, environmental testing was done to assess submarine groundwater discharge. A restoration of native plants is also underway, and phragmites abatement is also on the to-do list.

Although non-hazardous, "high levels of contamination that exceeded the county's regulation," were attributable to the property's septic system, Ms. Quarty said. Soil was removed from six leaching fields and replaced with clean fill. East Hampton Town absorbed half of the project's dumping costs and provided a grant to help the land trust with its remediation efforts.

The Peconic Land Trust hopes to donate a conservation easement to the town or a qualified organization for monitoring and to make sure that the property is never built on again.

"The endgame here is that this property would be a passive park for the residents of the town to come and sit and enjoy the view. It'll have a little kiosk there to talk about the preservation and mitigation that we've done in partnership with the Town and Friends and how we got to where we are," Ms. Quarty said.

She also noted that Ms. Rayner's gift actually triggered an anonymous matching grant from another resident, which will allow more acquisition and remediation for the Georgica and Lily Pond watersheds.

This is the second former restaurant site in Wainscott to be preserved as open space in recent years. Last year, the town established the Wainscott Green at the former site of the Star Room. "To have these two parks at either end of the business corridor is just a wonderful, wonderful frame," said Carolyn Logan Gluck, chairwoman of the Wainscott committee.