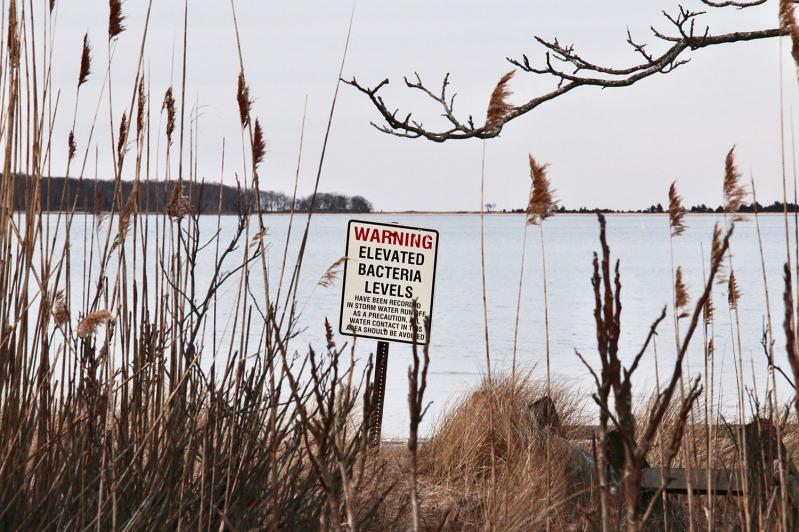 The effects of climate change are manifesting on Long Island, while excessive nitrogen loading from wastewater poses a material threat both to coastal ecosystems and human health.

Those were the solemn messages of "State of the Bays, 2021: Welcome to the Anthropocene," presented last Thursday by Christopher Gobler of Stony Brook University's School of Marine and Atmospheric Sciences. Dr. Gobler's sobering update quoted the Rev. Dr. Martin Luther King Jr. to illustrate the "inescapable network of mutuality" and the "interrelated structure of reality." "We really are all in this together," he said.

As Suffolk County's population has grown, so has nitrogen in groundwater, Dr. Gobler said. "We know that nitrogen is coming primarily from wastewater," he said, referring to on-site septic systems' impact on ground and surface waters. "We're all drinking from the same aquifer," and we are all affecting that same aquifer. "The closer you live to the coastline, the better chance that there are people upstream affecting the water you're drinking."

At a mean of 3.8 milligrams per liter, the nitrate level in Suffolk's public drinking water is in the top 5 percent in the country. This may have alarming implications, Dr. Gobler said, as multiple epidemiological studies have found statistically elevated risks of colon, bladder, kidney, and ovarian cancers at nitrate levels above 3 milligrams per liter.

Elevated nitrogen in water bodies also promotes algal blooms that are harmful to humans and pets as well as fin fish, shellfish, and ecosystems. High nitrates in surface waters can also make harmful algal blooms more intense or toxic, Dr. Gobler said. The New York State Department of Environmental Conservation tracks blooms, and Dr. Gobler's lab conducts analyses for the downstate region. Year by year, he said, the number of water bodies afflicted with toxic cyanobacteria, or blue-green algae, has increased. "It's all over New York State," in 50 of 62 counties, but nowhere more than in Suffolk, which saw some two dozen blooms in 2020, more than double the next county's total.

Multiple waterways on Long Island's South Shore are also beset with Dasysiphonia japonica, an invasive alga native to the Pacific Ocean, which reached the East Coast from Europe and is now widespread. Its release of sulfur gas as it decays poses serious risks to human health. Analysis of nitrogen in its tissue implicates wastewater, Dr. Gobler said.

Nitrogen leaching into surface waters also depletes the dissolved oxygen, upon which all marine life depends, from the water column, Dr. Gobler said. "And low oxygen has consequences" in the form of fish kills, as happened in multiple locations on Long Island last year.

Add to these conditions warming water -- global surface temperature in 2020 tied a record set four years earlier -- and increasing acidification of the oceans through absorption of carbon dioxide, and marine life, including the calcifying bivalves important to the South Fork's economy, is under severe threat. That last year's temperature record occurred despite the cooling effect of La Nina, an intermittent weather pattern in the Pacific Ocean that has extensive weather effects around the world but particularly in North America, is surprising and worrying, Dr. Gobler said.

Scientists believe that the earth has entered what they call the Anthropocene era, during which human activity is the dominant influence on climate and the environment. This is manifested in myriad ways. A hallmark of the Anthropocene era is "all these stressors on the rise," Dr. Gobler said. A statistically significant temperature increase in Long Island Sound over the last 20 years coincides with a rust tide season that grows longer every year and produces more intense blooms.

Acidification alone would eventually decimate the bay scallop population, he said, but parallel stressors of higher water temperature, diminishing dissolved oxygen, an intense rust tide, and a parasite, the role of which is under study, are likely responsible for the population's collapse in the last two years.

"The effects of climate change are obvious and go beyond scallops," Dr. Gobler said. "At the end of the 20th century, Long Island Sound had a robust lobster fishery. . . . But the Sound has become inhospitable to lobsters," a cold-water species that has migrated northward. The blue mussel's geographic range is also declining, he said.

"Locally, things are collapsing," Dr. Gobler said. "On a local level, what will we do to combat global changes?" Mitigating nitrogen is the primary effort to make ecosystems as resilient as possible, he said. Again, he quoted Dr. King: "We are now faced with the fact that tomorrow is today. We are confronted with the fierce urgency of now. In this unfolding conundrum of life and history, there is such a thing as being too late. . . . This is a time for vigorous and positive action."

Despite the gloomy assessment, "We live in hopeful times," Dr. Gobler said, citing the county's subwatersheds wastewater plan, a road map for transitioning from reliance on conventional septic systems and cesspools approved by the Legislature last year. "Suffolk County has gone from the worst management plan with wastewater to the best," he said, describing the state's most science-driven, long-range plan that foresees the upgrading of more than 200,000 septic systems, the primary mitigation strategy for reversing water quality impairment.

Seaweeds, Dr. Gobler said, also hold promise locally to mitigate impairments such as harmful algal blooms and acidification, and may be a potent fertilizer. Kelp farming could remove nitrogen and carbon dioxide from water and reduce acidification. Kelp could also significantly reduce Alexandrium, which produces toxic algal blooms that cause paralytic shellfish poisoning in humans.

The Stony Brook lecture series will continue on May 6 with a presentation on the Shinnecock Bay Restoration Program.