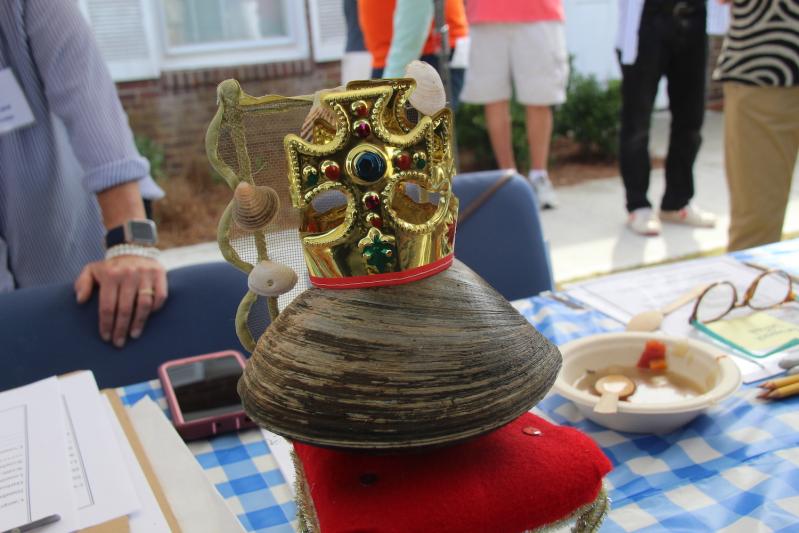 The largest clam of them all at the East Hampton Town Trustees' Largest Clam contest on Sunday was a 2.44-pounder that Dennis Curles wrestled from Napeague Harbor.
Durell Godfrey Photos
By Christopher Walsh

Perhaps it was the addition of clam pies baked by residents, free samples of which drew long lines. Perhaps it was the raw bar offering free clams on the half shell shucked by principals of Bennett Shellfish of Montauk, or the free clam chowder by Paul Roman (Bonac) and Bostwick's Clambakes and Catering (New England), or the music provided by the Lynn Blue Band. Perhaps it was all of the above, as well as the East End Classic Boat Society's raffle boat, a restored Joel White skiff; face painting for children by Jenn Woodason of Liquid Imagination, and an aquaculture display by the town's shellfish hatchery.

Whatever the reason, the crowd, on the grounds of the trustees' office at the Lamb Building in Amagansett, was the contest's largest in recent memory, and the clam delicacies were eagerly enjoyed. With local elections just a month away, many elected officials -- including the trustees, who own and manage many of the town's beaches, waterways, and bottomlands on behalf of the public -- and those who hope to be were on hand, meeting and talking with voters. The trustees' new pump-out boat, which will begin operation in Lake Montauk next year, was also on display.

Mr. Roman's clam chowder was deemed the best, with Jim Lubetkin's concoction taking second place. Both are perennial chefs and competitors in the annual contest.

In a new category exclusively for commercial fishermen, Clint Bennett's two-pound clam, harvested from Napeague Harbor, was the heaviest. And in the adult category, Jim Sullivan's 1.57-pound clam was the largest from Three Mile Harbor.

Dennis Curles, another perennial competitor, was the undisputed king of clams, his 2.44-pound monster taking top honors for both Napeague Harbor and largest overall entry. Mr. Curles's 1.39-pound offering was the heaviest harvested from Accabonac Harbor.

In other trustee news, the nine-member body voted at its Sept. 27 meeting to delay the opening of waters under its jurisdiction to the harvesting of bay scallops until sunrise on Nov. 7. The town code allows the taking of scallops from trustee waters between the third Monday in October and March 31 of the following year. New York State has set Nov. 1 as the opening of scallop season in state waters, but the trustees have traditionally opened waterways under their jurisdiction for scalloping shortly after the opening of state waters to allow additional time for scallops to spawn.

The opening and closing dates are unlikely to be significant this year, as all signs point to another disappointing harvest. A massive die-off of adult bay scallops -- between 90 and 100 percent -- occurred throughout the Peconic Bays in 2019 and again last year. Multiple stressors including high water temperature, low dissolved oxygen, ocean acidification, and a coccidian parasite have been blamed.

Hoedown on the Farm, Cocktails in the Garden
Main Beach Free Concerts in Final Weeks
Services and Counseling After Death of Popular Teacher Assistant
END_OF_DOCUMENT_TOKEN_TO_BE_REPLACED