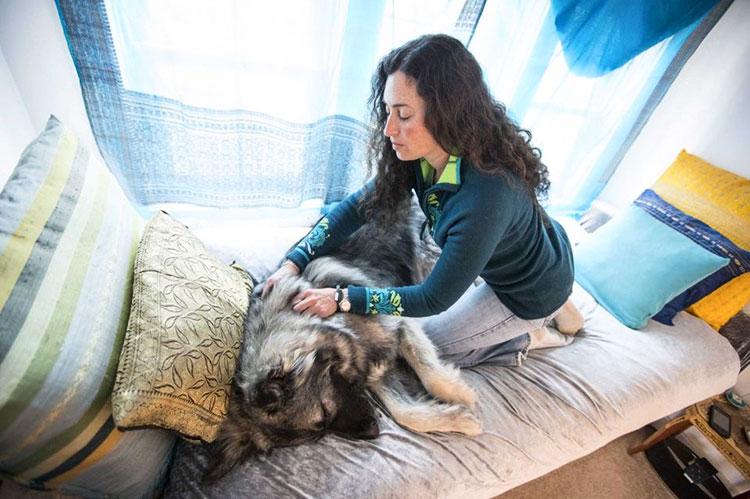 Veterinarians say some pets seem happier spending more time with their owners during the pandemic, but some pick up on their owners’ tensions, said Randy Handwerger of S.S. Aqua Dog, seen here giving her dog, Splash, a therapeutic massage.
Randy Handwerger
By Bella Lewis

The impact of Covid-19 on all walks of life includes big changes for those that walk on all fours and the people who care for them.

One of the biggest differences to veterinary work is that only patients are allowed in the office, and not their owners. "Our patients are not necessarily contagious, but the challenge of that is that the patients can't talk. If you're a pediatrician you wouldn't have just the infant in the office and not the parent," said Jonathan Turetsky at the Veterinary Clinic of East Hampton.

Concern about dogs and cats spreading Covid-19 is low, but Dr. Turetsky's staff wears gloves at all times in case the virus is on dogs' skin. The Veterinary Clinic is also not doing elective dental work on cats, Dr. Turetsky said, citing one Chinese study that suggested cats could potentially spread Covid-19 to each other.

The first dog to test positive for the coronavirus died on July 11, possibly because of cancer or the virus. His owner had tested positive in the spring.

"I'm booked and busy year round, but with 100,000 people from the city and their labradoodles, especially when the dogs are a disaster because they've equally been quarantined for so long. . . ."

What used to be in-person consultation now happens by phone and often in the parking lot. "We'll stand in the parking lot with masks on, then go examine the animal and come back out." Dr. Turetsky indicated that the many questions of a new owner make what used to be a half-hour in the exam room quite the back-and-forth. "It can be frustrating and inefficient," he said.

"Everybody moved out here on March 15 and everyone bought a puppy before they came," said Dawn Stelling of Olde Town Animal Hospital in Southampton. Dr. Stelling noted that human-less appointments and masks in the parking lot make it tough to put a face to the name at the start of the relationship. "In the same way a parent will attach to their child's pediatrician, usually you attach to your vet."

"It's awesome for us," Barry Browning said of the upside to one-on-one visits with puppies during the pandemic. "We get to bring them inside and play with them." Dr. Browning has found that at the Sag Harbor Vet Group the crucial thing to meeting clients outdoors is treating the parking lot like a waiting room. To avoid floods of questions whenever he steps outside, he has a staff member go out and keep everyone abreast about timing.

"But strangely I feel like I'm running more on time. Sometimes I think I can be chatty in the room with people," he said, laughing. "One annoyance is not making the decisions as we go along. Now I need to go out and say, 'Your dog needs X-rays and bloodwork' and ask permission, and then go back and tell the technician."

"And what about the people you're going to have to give bad news?" said Dr. Stelling. Most practices now have the weighty responsibility of euthanizing sick dogs without the families present. "It's hard delivering that news on the phone or in the parking lot," but she would not stand for taking away this final goodbye. Dr. Stelling found a way to put pets down with families present at a gazebo nearby and in a side room of the office that has a separate entrance from the outside, so people are contained and not mixing in the flow of office traffic.

Dr. Browning, Dr. Turetsky, and Dr. Stelling commented on how respectful and happy their clients have been. "Everyone down to the last person wears their mask," Dr. Browning said. "It's just confusing because you go out to people and you don't recognize them. I've known people for 20 years, but can't recognize them waiting in their car."

Dr. Turetsky noted the difficulty of being so busy at a time when reduced hours and staffing are in effect to minimize exposure. Dr. Browning agreed, "Memorial Day felt like my Labor Day." His practice has now returned to elective care, so on top of emergencies, there is a backlog of postponed routine visits.

"It's been August since March," said Dr. Davis of the South Fork Animal Hospital in Wainscott, who has been here 35 years and never seen it like this. It is not as simple as hiring extra staff. "We've created a bubble here and I don't want to break it with anyone who has been in a hospital or anyone else's house."

As for the rush of city folk living here now, "I don't think they're leaving ever or for a long time," commented Dr. Stelling. She hired a fifth veterinarian to meet a demand greater than she has seen in 25 years. "It won't just turn off the second Tuesday in September like it usually does."

Laura Plimpton has run Beach Paws, her dog grooming business in Wainscott, for 20 years. After writing a letter to nystate.gov to ask permission to stay open for the health and well-being of animals, "they wrote back and said I was actually an essential business and didn't need permission."

When a call to Ms. Plimpton's phone goes to voice mail, the caller will hear a charming but earnest request to not leave a message unless he or she is already a client.  "I'm booked and busy year round, but with 100,000 people from the city and their labradoodles, especially when the dogs are a disaster because they've equally been quarantined for so long. . . ." Classy Canine in Southampton also reported being swamped for the same reason.

Even so, Ms. Plimpton was on her way to return 23 phone calls to people who had left a message anyway. She grooms 15 dogs a day, she said, starting at 8 a.m. and continuing through until 4 p.m. without stopping. Afterward, she returns roughly 20 calls every day to people she cannot fit into her schedule.

Making the dogs feel comfortable considering such new norms is important to Ms. Plimpton. Dr. Browning has noticed that pets seem happier with their people staying at home, paying extra attention to them.

But Randy Handwerger of S.S. Aqua Dog has noticed a different trend among her clients. "There are a lot of animals picking up on the nerves of the owners and they have actually gained weight and gotten stiff and tight." Of course, "The dogs I see are the ones that already need the help." Nevertheless, she expected to share Dr. Browning's observaton. "Instead of napping on the couch all day, they seem to be like, 'Who's in the house? Who's at the door? Who's in the yard?' So many people around make them anxious and a little more on guard."

Ms. Handwerger treats her clients with therapeutic, hands-on massage, as well as Reiki, and cold laser therapy. She explained the latter as a cellular-level massage that loosens the muscles to boost circulation, achieved by shining a special light on the dog. She does swimming hydrotherapy, too, for animals with injuries.

"A lot of people are just saying that their dogs are bonkers, so lately my one-on-ones have been different, to help get the dogs' ya-yas out. The week in particular when things were opening up, there was this nervous energy around and all my dogs that I work with regularly were acting up like little kids. Everyone was antsy and it was affecting the dogs."

Ms. Handwerger also sells Charlotte's Web CBD oil and balm for dogs to help with sleep, soreness, and staying calm around firework noise this time of year. After giving it to their animals, Ms. Handwerger reports that her human clients often buy some for themselves, except not in chicken flavor.