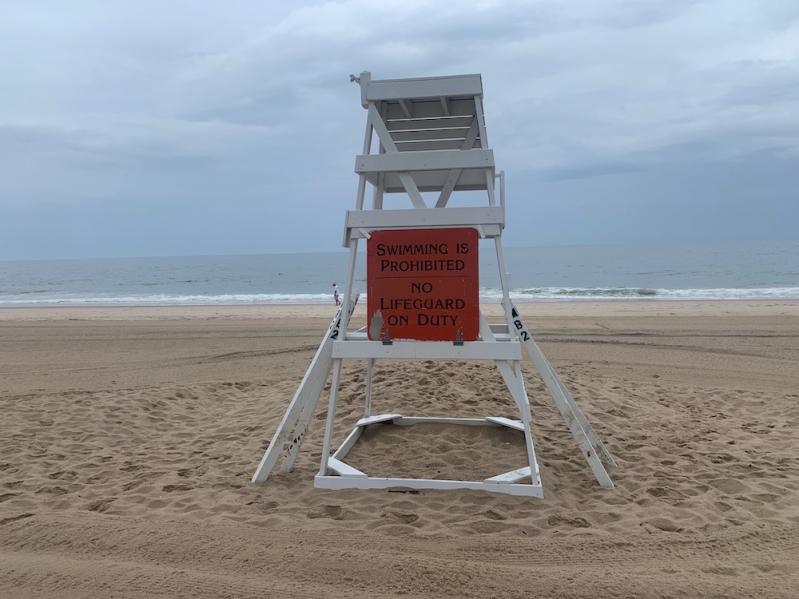 Main Beach and other East Hampton Village beaches were closed to swimming after a shark was spotted off Georgica Beach on Thursday.
Doug Kuntz
By Carissa Katz

As another hot weekend approaches, East Hampton Village's ocean beaches are closed to swimming Friday after a shark sighting off Georgica Beach, and East Hampton Town officials have warned prospective beachgoers that popular ocean beach parking lots could again be closed this weekend as they continue to limit beach capacity to comply with Covid-19 safety regulations.

A lifeguard spotted a shark heading east from Georgica Beach to Main Beach on Thursday afternoon, East Hampton Village Mayor Richard Lawler said on Friday. It was close enough to shore to be seen without binoculars, he said, but about midway between the beaches it disappeared from view. After the sighting, swimmers were immediately cleared out of the ocean.

On Friday morning, a drone was used to survey the waters off both village and town beaches, said Mr. Lawler, and there was no sign of a shark.

East Hampton Town's beaches remain open to swimming according to East Hampton Village Police Chief Michael Tracey, who alerted Ed Michels, the chief harbormaster of East Hampton Town, of the sighting and is coordinating an ongoing response to shark sightings and beach closures.

The town will use Jet Skis to monitor the waters for sharks, he said.

Like East Hampton Town, the village has been limiting beach parking this summer to only permit-holders to prevent overcrowding. Barricades block off some of the parking during the day and at night at Main, Georgica, and Two Mile Hollow Beaches.

The town on Thursday said that ocean beach lots at Indian Wells and Atlantic Avenue in Amagansett and Ditch Plain in Montauk are likely to see closures at points over the weekend as they reach capacity. Its lifeguards, Marine Patrol, and Recreation Department staffers will continue to serve as "beach ambassadors" to remind beachgoers of safety protocols. Masks are required when entering and exiting town beaches and when a six-foot distance from others cannot be maintained.

The town suspended the sale of most nonresident beach permits, allowing only immediate family members of residents to buy nonresident family permits, and has not been selling daily parking permits. On Friday, however, the board set a daily parking fee of $35. In past years, pay-per-day parking has been offered at Kirk Park in downtown Montauk and Atlantic Avenue Beach in Amagansett.

Councilman David Lys confirmed that daily passes will be sold at Kirk Park this weekend "as a way to alleviate beach-capacity issues, illegal parking, and public safety issues in other areas of the hamlet."