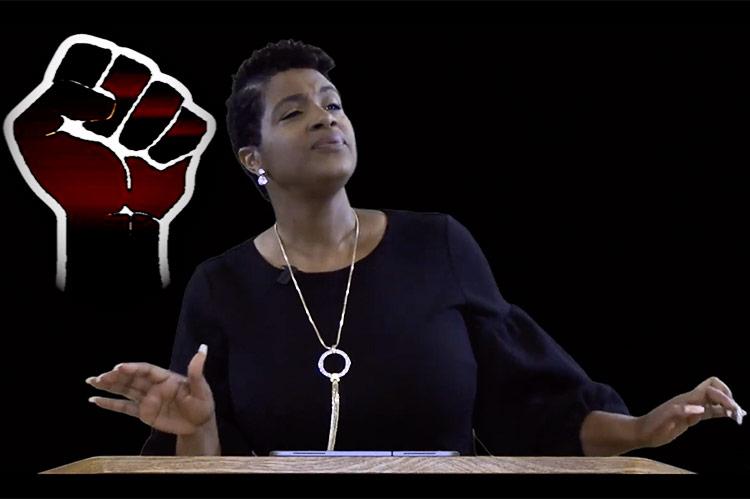 The Rev. Tisha Williams of the First Baptist Church of Bridgehampton is seen in a screenshot from her most recent YouTube worship video. The videos are averaging around 1,000 views a week, drawing far more viewers than can fit in the church pews.
By Bella Lewis

At the start of the pandemic, the Rev. Tisha Williams intended to keep the First Baptist Church of Bridgehampton open even when church doors would be closed. She did not expect, however, for the obstacle to be a catalyst.

"It's like night and day," she said of the church's nearly 100-percent increase in worshipers. At the end of March, she began navigating the virtual space with online worship videos on YouTube, which were soon averaging around 1,000 views a week. "It's phenomenal because we can't fit that many people in the church," she said.

Bible study over Zoom was next. When asked to compare her experience to a recent "Saturday Night Live" parody in which good-natured chaos reigns over a Zoom worship service where people constantly forget to mute themselves and reveal glimpses of their home lives, she laughed, "That is reality. They didn't embellish one bit."

More seems to get done in Ms. Williams's Bible study than on TV though. "When we were in the church, we did something called 'row check,' which meant you would ask, 'How are you doing?' to those in your row. It gave us a point of contact because you can come into church and not know what people are going through."

Row check was a virtual success. At the end of May, the church held an afternoon and evening session over Zoom, with a dial-in number for senior citizens, and a total of 50 participants who checked in on one another. "Who are you and how are you?" is the leading question of row check. "One of my favorite things was to shake hands and greet people," said Ms. Williams, who was pleased to see so many faces on Zoom after losing the chance to have in-person greetings.

Services are taped on Thursday in the church. Ms. Williams explained that the praise group, six members of the choir, will go in and sing, using tape on the floor to demarcate social distance. On May 31, the parking lot of the church was also used for a socially distanced ice cream social, the first time the congregation had come together since stay-at-home orders went into effect.

Fresh Direct has residence on Tuesdays and Thursdays from 1 to 7 p.m. in the church parking lot. The partnership creates a space for grocery pickup, since the influx of people from the city quickly overwhelmed the food delivery service's time slots when it resumed its Hamptons delivery as of Memorial Day weekend.

Ms. Williams talked about how she is trying to take advantage of an empty church. "We're working on a reconstruction of the sanctuary to better facilitate worship in a virtual space. We've expanded the pulpit and created more of a platform as opposed to just having the pews. It's opened up, put musicians on platforms, and anything presented can be on the pulpit and not the floor."

The bathrooms and kitchen in the more than 40-year-old building are also being renovated. "In a time where everyone is resting and revitalizing, we chose to do the same for the building. When we do come back there will be something to look forward to."

Shorter term, Ms. Williams has something to look forward to each morning: The First Baptist Church of Bridgehampton has a morning prayer call every day at 7:14, implemented in March. "We've had to reimagine what church looks like and what connection and being in prayer look like in this particular time." The specific time of day for the call was chosen for 7:14 in Second Corinthians, "If my people, who are called by my name, will humble themselves and pray I will heal their land."

Deacons and deaconesses of the church lead the prayer that anyone can dial in to join. "Anyone" being the operative word. "We have people dialing in from all over: North Carolina, Virginia, New Jersey, Florida, farther up the island. It's no longer our immediate church body. People have been inviting people and we also have people from all over the United States in our Bible study. Every pastor is a multi-campus pastor." She fondly calls it "Bridge-nation."

Bible study groups average about 30 people, weekly, at noon and 7 p.m. "Compared to Bible study in the winter when it's more difficult for seniors and parents to come out at 7 p.m., the virtual platform has made it more convenient and is actually one of the changes that we will keep going forward. If it's working in this space, then it will work in the future!"

"It's a critical time for pastors and leaders to re-evaluate, certainly in a pandemic, certainly in the civil unrest following the death of George Floyd. God is calling us to be imaginative." In addition to being a pastor, Ms. Williams leads a women's ministry movement called Who's That Lady? She said that the movement has many followers in the United States and as many as 500 in Uganda and Kenya.

In the wake of Mr. Floyd's killing, Ms. Williams gathered her ministry friends and contacted social justice leaders to hold a 12-hour Zoom and Facebook Live session called Holler. The title refers to Jeremiah 9:17: "Consider now! Call for the wailing women to come; send for the most skillful of them." She explains, "I wanted to give people a space to mourn, to lament over the deaths. Ahmaud Arbery is the best friend of my cousin, so it hit very close to home. I felt compelled to do something, to give a voice to the voices who were snuffed out." With well-known preachers and pastors from all over the world, Holler was 12 hours of prayer, song, and spoken word poetry from noon to midnight. It had almost 5,000 views.

Ms. Williams reflected on the triumphant event. "It was our form of protest. People need to express how they are feeling in order for the work to begin. I'm a huge advocate for giving space to lament." She has also led the community in protests across Bridgehampton and East Hampton and has been invited to do several prayer calls.

"I could never have imagined that this would happen or where we would be. There was no time to be shocked, no time to be a deer in headlights, and I think the work for me has made all the difference. Pastors don't come out of this unscathed. My best friend's mom, my uncle, and a church member died of coronavirus. It's not without its tragedy."

It's about a 12-to-15-hour day in the shoes of Ms. Williams during this time of sickness and civil unrest, and she says, "I have to be honest with you and tell you I wouldn't have it any other way. It has been difficult. It's been agony and ecstasy and yet, I still find God's grace. I see glimmers of hope. Even in this, could it be that in the worst time of our lives we have become our best selves? People are working together, appreciating the little things more. The economy is down but empathy is up! We have reimagined what essentiality is like, what used to be essential in celebrity is now the nurses, doctors, food truck drivers, grocery workers. We have found God's grace in all of that."

Ms. Williams said she's been going to Ocean Road Beach and only yesterday she saw a seal in the water. "Like the water in Venice, just to see a seal floating, it made me stop and think Earth is healing itself. I'm wondering if it's not every day one week around Earth Day we need to quarantine," she said.
--
Correction: An earlier version of this article misquoted the Rev. Tisha Williams regarding a cousin's close friend. Her cousin's best friend was Ahmaud Arbery, not Breonna Taylor.