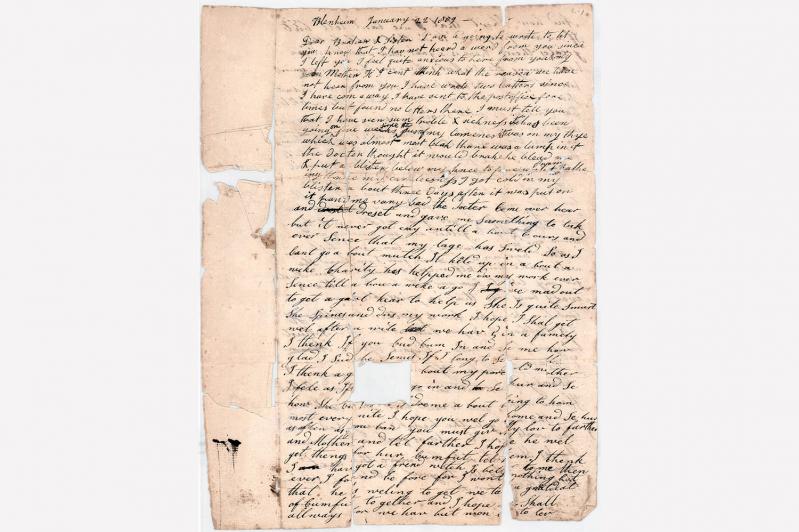 Can you imagine the feeling of not knowing if people you care about are okay because you haven’t heard from them, and they’re just not texting or calling you back? Now imagine there are no telephones or texting, only paper letters that take weeks to travel back and forth.

Abigail’s pleas for family news reflected the challenges of frontier life and an unreliable mail system that depended on horses and unpaved roads and was delayed by winter weather. In 1809, mail wasn’t delivered at home. People traveled to the post office, and postage was paid on the arriving mail, which Abigail refers to in this letter.

Abigail reported being very sick, which might have contributed to her anxieties. Despite her doctor’s efforts with techniques like bleeding, her leg remained swollen, causing great pain. She identified her “lameness” beginning five weeks earlier and originating with a lump in her thigh that was “almost bla[c]k.”

It’s unclear from Abigail’s description if she was afflicted with something like a tumor or if it was more like an infection, but her situation was quite serious at a time without antibiotics.

Her lameness forced her husband, Conklin Osborn, who lived from 1779 to about 1845, to hire a girl to help with household chores, a situation Abigail hoped would be temporary. Letters in 1816 and 1817 indicate that Abigail recovered and resumed housework.

She reassured her family that Conklin attended church regularly, and noted that the couple took great comfort from being together. She hoped this would never change, reflecting that they had “but [one] life to live,” and described her husband as her greatest friend, romantic sentiments that stand out in a time of arranged marriages.

Abigail and Conklin remained in Blenheim until their deaths, and her letters are filled with references to family members there and in East Hampton.