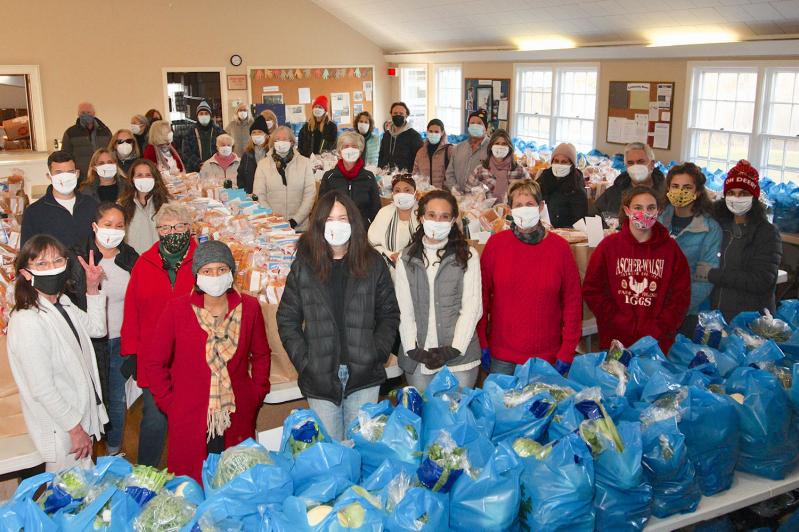 Local food pantries usually see the greatest need in the winter months, when those with seasonal jobs struggle to make ends meet, but because of the pandemic and job losses caused by the economic shutdown, they have been helping feed a record number of people all year.

At the Springs Food Pantry demand has increased by more than 300 percent this year, according to Holly Reichart-Wheaton, the director, and its South Fork counterparts -- the East Hampton Food Pantry, Montauk Food Pantry, and the Sag Harbor Community Food Pantry -- have also had a surge in clients.

At the onset of the pandemic in March, the pantries quickly adjusted their distribution processes to comply with safety protocols, and relaxed their registration requirements to make sure anyone who needed food could get it. "We just want to make sure people get fed," said Vicki Littman, the chairwoman of the East Hampton Food Pantry at the time.

Since then, the need has been constant, and the pantries' volunteers have stepped up to meet it. "They're the greatest people in the world," said Russ Calemmo, the vice chairman of the East Hampton Pantry's board. "They do it only for the love of helping those in need."

When the threat of the virus kept some Springs Food Pantry's helpers housebound, "a parade of young enthusiastic volunteers" filled the void, said Ms. Reichart-Wheaton.

Local businesses and organizations also pitched in with donations small and very large. The owners of the Honest Man Restaurant Group, which includes Nick and Toni's, Rowdy Hall, Townline BBQ, Coche Comedor, and La Fondita, teamed up with the East End Food Institute to prepare and deliver 400 meals to the Springs Food Pantry and the Heart of the Hamptons food pantry in Southampton. The Sag Harbor Cinema Arts Center created a community relief fund that distributed $250,000 to nonprofit organizations that help those in need of food and other aid. A charity golf match at the South Fork Country Club in Amagansett in June raised $115,000 for East Hampton food pantries. Sound Aircraft Services, which operates at East Hampton Airport, started a pledge drive on GoFundMe.com to raise $40,000 for the town's pantry, and East Hampton Post 550 of the Veterans of Foreign Wars donated $2,000 to the East Hampton, Montauk, Wainscott, and Springs food pantries.

"My emotions have run the gamut, starting with panic in March when our recipient numbers were soaring and our purveyors couldn't get us enough food -- our freezers were empty," said Ms. Reichart-Wheaton, thinking back on the year. "Then I felt relief when a friend put us in touch with a butcher in New York City, and within a week our freezers were full." Ultimately, she said, "I'm grateful for being part of a community that cares about its neighbors. The outpouring of support from individuals, businesses, foundations, and civic organizations has been phenomenal and allowed us to continue our mission."