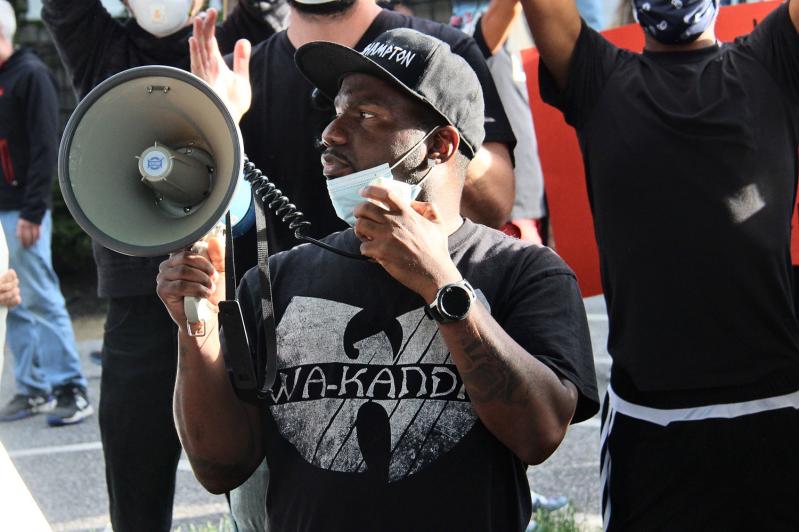 Willie Jenkins at a Black Lives Matter rally in Bridgehampton in June. "I was taught that you get respect when you give respect and vice versa," he said earlier this month.
Durell Godfrey
By Carissa Katz

In a year marked as much by social upheaval and a nationwide reckoning over race as it was by unprecedented public health challenges, Willie Jenkins stands out not only for demanding change but for creating it.

In addition to distinguishing himself as a leader of peaceful Black Lives Matter rallies across the East End, Mr. Jenkins took the lessons of the racial justice movement one step further by starting the Zenith Youth Program at the Bridgehampton Child Care and Recreational Center this fall to teach young people about Black and African history and heritage.

He reflected this month on how outrage over the killing of George Floyd by Minneapolis police officers in May "caught fire and went through the country," spurring people of all races to "speak up and speak out." He had already been doing just that for five or six years, organizing rallies to call for equal justice in policing and an end to systemic racism. But this summer the dozens who had joined him in previous East End rallies grew to hundreds and even thousands marching in solidarity with millions across the country and the world.

"We're saying Black lives matter because we've been marginalized for too long," said Mr. Jenkins, a Bridgehampton native who lives in Riverhead and works as a cleaner at Stony Brook Southampton Hospital. "We haven't been given justice for too long. We're not saying we want more than anybody, we're not saying we want to take over anything; we're just saying treat us like everybody else gets treated."

On the local level, he said, "The police that I've worked with have been nothing but upstanding, great, honorable people. They've done their job; they protect us. . . . They protect the people that are protesting against us. . . . And I respect and honor them."

"I was taught that you get respect when you give respect and vice versa," said Mr. Jenkins.

Mutual respect and self-respect are what he imparts in the Zenith Youth Program, which was inspired by a Unity youth program he took part in as a teen. Mr. Jenkins's activism is rooted in a deep love of community. "I love everybody," he said, adding that people often call him "the Mayor," because he seems to know everybody, too. He is "fiercely loyal" to Bridgehampton, in particular. Another of his endeavors: Bridgehampton Day, an annual celebration of his hometown and a showcase of its residents.