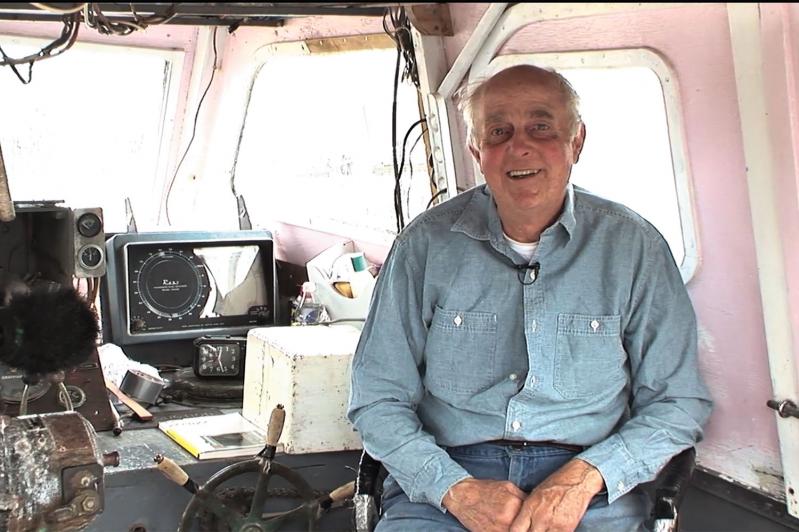 Stuart Vorpahl on his boat in 2010 being interviewed for LTV's "A Sense of Place," in which old-timers shared memories of life in East Hampton.
Max Scott/LTV Archive
By Bella Lewis

Covid has given most everyone a good reason to sigh for simpler times, but perhaps the loudest sighs lie muffled, hidden within a subset of LTV's video collection, where local fishermen, bygone and not, reminisce on simpler times of their own.

The station began in the early 1980s, coinciding with the start of the foundering of the South Fork's commercial fishing industry. Over 100 shows in the LTV archives document this moment of change, when the State Department of Environmental Conservation began imposing strict sanctions, in the form of quotas, on what had been a relatively unfettered way of life.

Sportfishermen across the state lobbied successfully for restrictions on the taking of striped bass, the "money fish" that haul-seiners counted on to make a living for their families, as documented in Peter Matthiessen's "Men's Lives." (The title came from a remark by Sir Walter Scott: "It's no' fish ye're buyin,' it's men's lives.")

The families interviewed by LTV talk about the 1920s and earlier, but they themselves date back to the first settlers of East Hampton, some 11 generations ago. In their voices, said Genie Henderson, LTV's archivist in charge, linguists can hear echoes of the 17th-century Middle English vernacular spoken in Maidstone, England, as they tell of trap fishing, gillnetting, clamming, trawling, the coming of the railroad, the fish factories out by Promised Land, the Hurricane of '38, various clans within the community, and haul seining -- setting a huge net in the sea and dragging in the catch.

State restrictions hit the haul-seiners hard. LTV has film from 1992 taken by Ralph Carpentier, a bayman and artist who was then head of the East Hampton Town Marine Museum, showing baymen at Indian Wells Beach in Amagansett being arrested for civil disobedience.

"What I love about this collection is that the stories are so rich and full of something that I'm not sure we have going on out here today," said Ms. Henderson. "One of the frustrations I have," she added, "is, no one really knows it's here." She is now working to get the archives online, supported by a Regional Media Legacies grant from New York University's Moving Image Archive and Preservation program.

In one 1987 interview, part of the folklorist John Eilertsen's series called "Voices of East Hampton," Mr. Eilertsen talks with four commercial fishermen: Jarvis Wood, Tom Lester, Milton Miller, and Brad Loewen. At one point he comments that outboard motors were in use here before they were legal in taking scallops.

Mr. Loewen responds: "When I was a little kid and I first started going with my grandfather, my job was to keep lookout for the State man. The sharpies that they were using to go scalloping had a square sail on them, and under about the best conditions, as far as I could tell, a sharpie with a square sail would sail about as well as a brick. My grandfather hid me on the dredges and on the outboard, and grandma, she would be culling, and I'd be peeking around looking for things."

The bay constables let motors slide much of the time, he said, but Mr. Eilertsen wonders if the rule breakers were really all that obvious.

"Sure you can tell!" Mr. Lester says with a laugh. "When you're sailing against the wind with a square sail, it's not hard to tell!"

Mr. Miller grew up on Atlantic Avenue, right where the Amagansett Life-Saving Station is now. The beach there was where everybody went cod fishing; many people still do. "East Hampton Town practically survived off of the cod fishing," especially in winter, Mr. Miller said.

Mr. Wood, who grew up as one of 11 children in a Springs household, commented that even in hard times, "You could always find something to eat if you could go out and get it."

"Well, we didn't know we were poor!" he said in a later interview.

Mr. Miller said he hung around the fish shanties by the beach as a boy. "I was in the way a lot." The baymen agreed, though, that those moments were when knowledge was passed along from generation to generation. "That's all picked up just by listening. They don't very seldom tell you much, but you just looked and listened," said Mr. Miller.

"I was only a little fella," he continued, "and I could just about reach" into the big gutting box for the fish, "and every once in a while, one of those fishermen got a chance, some of 'em would deliberately, when I reached in there, hit me across the head with the gut, just for meanness, you know? But the old cap'n, if he ever caught them, boy, he'd really lay the law down to 'em."

Once, he recalled, the men gave him a codfish to take home, so big that the little boy could hardly hold it up. "And they were all laughing in the background, and I was trying to get that fish home, dragging him, but every other step, I'd step on his tail and go headfirst, fall down, pick him up again. We had fish enough to eat for two weeks out of that one fish."

Mr. Lester, whose mother fished with his father, said he doubted his grandchildren would be fishing. Even back then, brown algae were decimating the scallop crop, plus the quotas on the stripers. "Law, pollution, and politics" were complicating everything, he lamented.

One of Ms. Henderson's favorite interviwees was the bayman Stuart Vorpahl, a former town trustee and informal town historian, who, she said, would come on to do shows and talk so much that "you wouldn't know there was an interviewer."

"He tells a story about going to the Amagansett elementary school, and as soon as school was out, he walked to the fish market." (Stuart's Seafood Market now.) "And there was a crow that used to meet him at the school gate, and fly with him to the fish market, and wait for him to fly with him home. Every day!"

In 30 minutes of unedited footage from a 2010 interview, Mr. Vorpahl told how "one day, I had the bright idea to take my two squirrels to school, and I put 'em in my shirt sleeve." The squirrels were well-behaved, he said, taking turns climbing into his shirt pocket, where he'd hidden some peanuts, by way of the two shirt buttons he'd left undone. "About 10 o'clock in the morning was when Doomsday happened to Stewie. Teacher didn't know nothing, and none of the kids knew I had two squirrels in my elbows. Darn if they didn't decide to start fightin!" Growling and "schrowling," he said, laughing.