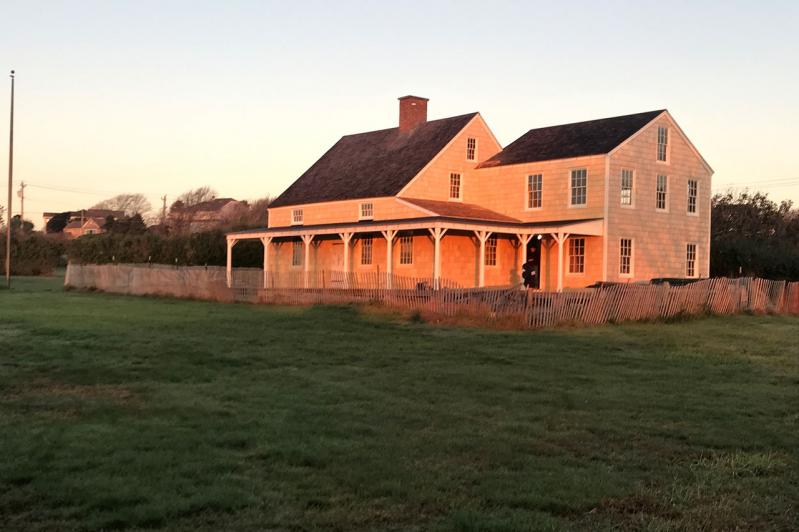 There are hopes for historic landmark designation for Second House in Montauk.
Jane Bimson
By Christopher Walsh

The completion of a second phase of renovation at Second House in Montauk, one of the oldest structures in the Town of East Hampton, coincides with a move toward historical landmark designation, the town board was told this month.

It came as a surprise, Councilman David Lys told his colleagues at the board's Nov. 10 work session, that Second House, originally built in 1746 and replaced in 1797, had not been designated a historical landmark in the 52 years since the town and the New York State Historical Trust purchased the property from the David Kennedy family, which had acquired it early in the 20th century and used it as a summer residence. Second House opened as a museum in 1969 under the management of the Montauk Historical Society, but was closed in recent years because of its dilapidated condition. Twice-yearly craft fairs on the grounds are a popular draw in the summer.

The 1797 replacement of the original Second House, built to house the keeper who tended sheep to the west and cattle to the east when Montauk was pastureland, came about when the town allotted "three gallons of rum to raise the house at Fort Pond," according to town trustee records. Further alterations to the structure were made in 1879, 1880, and 1912.

A 2016 report prepared by Robert Hefner, a historic preservation consultant to the town, said that in its present state, Second House, adjacent to Fort Pond on the western edge of Montauk's downtown, more closely resembles an early-20th-century summer cottage than the residence of livestock keepers it was in the 18th and 19th centuries. The timber frame had deteriorated, wiring and plumbing were obsolete, and an infestation of raccoons and other animals in the attic and cellar rendered the latter inaccessible and the interior air inhospitable.

"The Second House does not possess the integrity to express its historic significance as the residence of the livestock keepers from 1797 to 1895," Mr. Hefner wrote. Those keepers had names familiar to many residents: Hedges, Parsons, Miller, Fithian, Lester, Osborne, Conklin, Stratton. "The Second House today provides only a hint of its nineteenth-century exterior appearance and the keepers would not likely recognize the farmhouse they lived in."

"It is the recommendation of this report that the Second House be restored to its appearance in 1886 when George A. Osborne, the last keeper employed by the proprietors of Montauk, departed," Mr. Hefner wrote. That restoration required removal of the 1912 east addition, dormers, and porch, reconstruction of the early east lean-to, of which some framing remained, and reconstruction of the circa 1880 porch. The town board announced a restoration project at the end of 2018 and accepted a $453,442 bid from Ronald Webb Builder of East Hampton.

The first phase of restoration focused on the building's foundation, first-floor frame, and the removal of unhistorical additions. The next consisted of the removal of cladding, siding, and some of the gables, Mr. Lys said.

The town board voted unanimously last year to designate the Art Barge and the D'Amico Studio and Archive in Amagansett as local historical landmarks. Should it agree that Second House and a barn on the property meet the criteria for historical landmark designation, it must first schedule a public hearing. Doing so, Mr. Lys said, could "protect it for future use, and also potentially bring in greater chances for institutional grant funding."

Jessica James, chairwoman of the historical society's Second House committee, told the board on Nov. 10 that it is hoped that the grounds can be reopened for outdoor events by next year, depending on the status of the coronavirus pandemic.

"We look forward to the restoration of the building so that we can design what we hope will be a really wonderful museum," she said. Mr. Hefner had taken "what was just a feeling from the Montauk Historical Society and our Montauk community that we really wanted this property restored to its former glory. He took that notion and came up with an actionable plan which is so detailed and great to read." His 2016 report is on the society's website.

The craftsmanship of Ronald Webb Builder is "extraordinary," Ms. James said, predicting that the restored Second House "is going to be the jewel in the crown of Montauk."