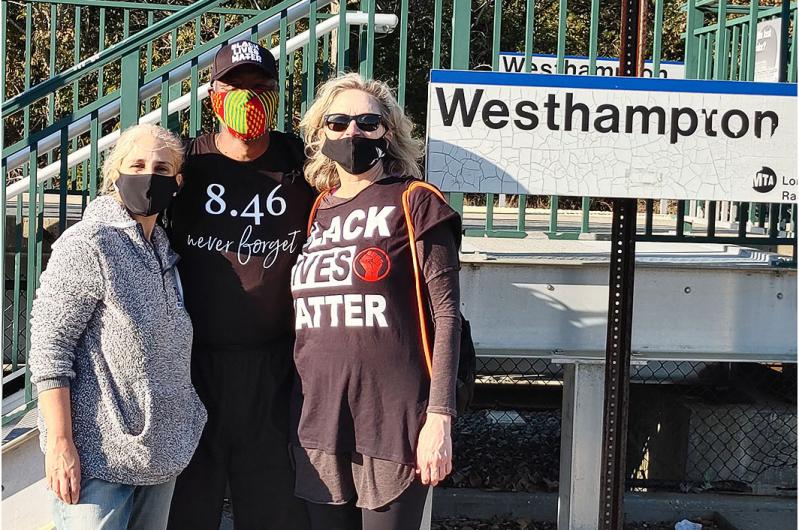 Leon Goodman of Bay Shore set out nine days ago to walk the entire length of Long Island — from the foot of the 59th Street Bridge in Queens to the Montauk Point Lighthouse — in an act of support for the Black Lives Matter movement.

Mr. Goodman, 69, has experienced some blisters and knee pain along the way but said yesterday that it has been a fulfilling journey, one he expects to complete on Saturday afternoon.

"I needed to respond to what was happening, but I wanted to respond to it in my own way," he said by phone yesterday. The messages of the pro-Black Lives Matter demonstrators across the country were "getting lost in the spin that people opposed to it were putting out."

Along the way, he has met people who support and encourage him, but he's also met with some pushback from passers-by who have shouted things like "blue lives matter" and "all lives matter" at him. One person even shouted "he deserved it" when Mr. Goodman asked him if he knew about what happened to Jonathan Price, a 31-year-old Black man killed by a white police officer on Oct. 6, who had been described by those who knew him as "a pillar of the community."

Mr. Goodman has received particular support from the group Black Lives Matter of Eastern Long Island. Some have joined him on parts of his journey. He walks around 12 miles each day — he was up to 96 miles yesterday before he set out from Hampton Bays heading east. His path takes him along the South Shore branch of the Long Island Rail Road, which he knows well as a retired L.I.R.R. employee. Mr. Goodman takes the train home each night, then takes the train back in the morning to pick up where he left off.

"Whatever motivated me to do this walk, I realize now . . . that I absolutely made the right decision," he said. "I just knew it was the right thing to do. God has managed my steps, he really has. Walk by faith and not by sight — people will hear you along the way. And they really are hearing me."