What were these big birds doing off Long Wharf? 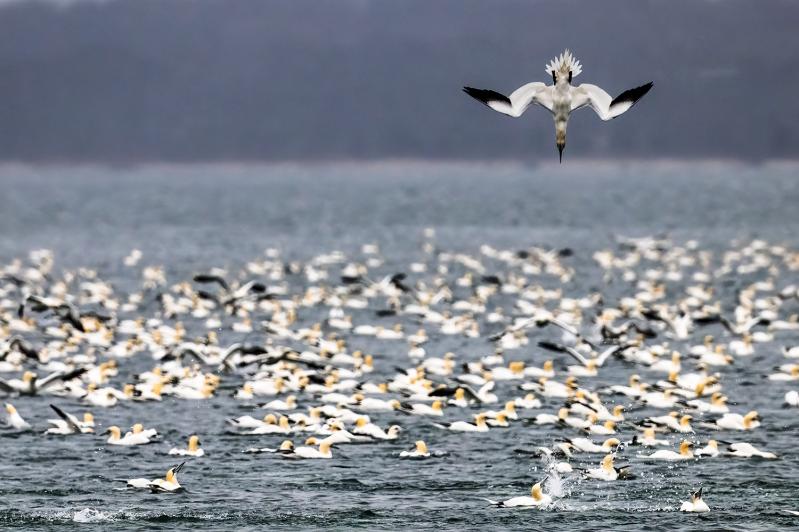 As a diving gannet nears the water, it pulls its wings tight to its body.
Marianne Barnett
By Christopher Gangemi

I missed the northern gannets.

Eleven days ago, on April 3, they invaded Sag Harbor. A friend sent a video of several hundred crowding the waters surrounding Long Wharf. Above them, the sky teemed with more. In 20 years of birding around Sag Harbor, I had never seen more than a handful from the wharf.

“These are big birds, with the wingspan of a small eagle, stretched to a needle’s pin in all directions — long, tapered wings tipped in black and a three-foot body that ends in a wedge-shaped tail at one end and a swordlike beak at the other,” wrote Scott Weidensaul in “Return to Wild America: A Yearlong Search for the Continent’s Natural Soul,” his celebrated 2006 book. “The plumage is gleaming white, except for a wash of gold on the head. The eyes and beak are rimmed in heavy outlines of black.”

The old Cornish name for the gannet, according to Mr. Weidensaul, was “saithor,” which means “arrow.”

Other friends sent texts with stunning videos of the northern gannets, and emails describing the scene. One said it was “apocalyptic.” Another described a “white carpet” of birds on the bay. In one of these videos, you can hear nearby people gasping and laughing nervously, perhaps because they were witness to great, efficient violence.

What were these northern gannets doing here, in numbers, mere feet off the end of Long Wharf? And how had I missed them? I drink my morning coffee on Long Wharf every day!

Harvey Bennett, who followed the comings and goings of fish for years as owner of the Tackle Shop in Amagansett, said these birds are likely attracted to menhaden and alewives. The gannets’ migration north in March and early April to their breeding grounds runs coincident with the spawning of both these fish species.

Gannets feed exclusively on fish. Hundreds or even thousands of birds mass together in a concentration above their fishing grounds and, at turns, dip a wing, sometimes from over a hundred feet above the water, diving after their prey. By the time their beak pierces the surface of the water, they are moving as fast as a speeding car on a highway. Although they don’t often dive terribly deep, they are capable, according to allaboutbirds.org, of pushing as deep as 72 feet below the surface, using their wings as giant flippers.

In November 2020, while walking with my oldest daughter from Montauk County Park to Shagwong Point, we watched 300 gannets dive-bomb a school of fish. I wrote in my notes, “What a show!”

At the beginning of their dive, their wings are outstretched, but by the time they enter the water, they are tight against their body. “The nearly closed wings . . . guide the living arrow in its downward flight,” wrote T. Gilbert Pearson in “Birds of America.”

Right now, we are watching them hunt, but in two or three weeks, their lives will be quite different. They will transition from the air to remote, rugged, rocky islands, mostly around Newfoundland and Labrador, where they will breed in large groups called gannetries.

One such place is Cape St. Mary’s Ecological Reserve. A craggy sea stack known as Bird Island hosts hundreds of nests. YouTube it. The harsh, honking, grating calls of the swarming gannets mix with the percussion of seawater slamming into cliffs and the sizzle of seafoam on the water’s surface. Foghorns moan.

Gannets are monogamous, mating for life. Pairs somehow find each other back at the gannetry, after winters spent apart, year after year. It must be sort of like finding your wife at Grand Central Station during rush hour. When they find each other, they wave their beaks at each other, and stare into each other’s eyes. The female may offer her nape so the male can take a nibble.

So many gannets cling to the rocks that from a distance it looks like snow capping a mountaintop. You think finding a parking spot is tough in July? On Bird Island, male gannets routinely fight and injure each other over nesting territory.

The female lays only one egg a year in a nest made mostly of seaweed, feathers, mud, and excrement. According to allaboutbirds.org, unexpected items routinely make cameos in gannet nests: Plastic frogs, false teeth, a catheter, and even a gold watch have all been used by nesting gannets. Parents share in the feeding of the young, which take over three months to fledge. Both sexes defend the nest.

Gannets have rich social lives, of which we witness only a portion — the hunt. That is why I was so upset to have missed them in Sag Harbor. The thing to understand about birding, though, is that if you do not go outside, you will never see a bird. I kept checking.

A few days after the Sag Harbor gannet show, last Thursday, Michael Scheibel reported 670 from the South Ferry, which gave me hope. Finally, on Monday, after grabbing my morning coffee at Grindstone, I went down to the wharf and got lucky.

I looked out across Sag Harbor Bay toward Cedar Point. The gannets were so distant they looked like gray scribbles of pencil on the low, glowing morning horizon. Had I not heard the recent reports, I could have easily overlooked them. The gannets slowly crept west, rounding Mashomack Point and then heading north up the east side of North Haven toward the South Ferry. I rushed home to pick up my youngest daughter, hoping to amaze her with close-range gannets at the ferry slip.

We arrived at the ferry terminal minutes later. We found nothing but a cloudless sky. The gannets had vanished. The ferry guys betrayed nothing. An elephant riding a flying carpet might have just flown by and we would not have known. That is just the way it is, sometimes.