And about those home tests: A doctor offers advice 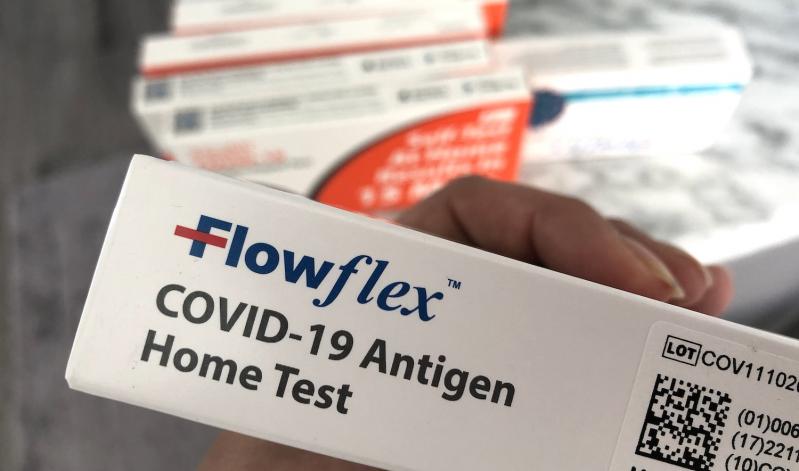 Home test kits for Covid-19 are now widely available, and can be a useful tool if employed at the right time.
Carissa Katz
By Judy D’Mello

The Omicron variant of Covid-19 continues to surge through Suffolk County, with the seven-day average of positive rates reaching an all-time high of 27.5 percent on Jan. 5.

In results reported on Monday, the seven-day average had dropped to 25.9 percent.

As of Tuesday, there were 28 admitted Covid-19 patients at Stony Brook Southampton Hospital, officials reported at the East Hampton Town Board and Sag Harbor Village Board. Five were in the intensive care unit and one was on a ventilator, they said. Eighteen of the 28 patients at the hospital were vaccinated, and three of the five in the I.C.U. were vaccinated, Thomas Gardella, Sag Harbor’s deputy mayor, reported at a village board meeting on Tuesday night.

A hospital spokeswoman said that there had been 23 Covid-19 inpatients on Monday.

“It been hell of a two weeks,” said Dr. George Dempsey, the medical director of East Hampton Family Medicine. During a phone call, Dr. Dempsey acknowledged that there are “signs of backing off” from the Omicron surge, but pointed to possible “over testing” because of the recent widespread availability of rapid at-home tests, following their scarcity over the holiday period.

He believes the abundance of home test kits, available now in local pharmacies such as CVS and White’s Apothecary, has resulted in a lot of unnecessary self-testing and even more testing in his office. “Because, if the home test is positive, they come to my office to get re-tested, because they don’t believe the home tests. So, what’s the value in them?” he asked.

What also clearly frustrates Dr. Dempsey is a lack of education about when exactly to self-test. “People learn they’ve been exposed and freak out. So, they go straight home to self-test, not understanding that it takes three to five days before an infection will register,” he said. People are testing too soon, simply because tests are now so readily available. This can often produce a negative result and then people fail to take necessary precautions, he said.

He would like to see officials deliver clear instructions, whether on the C.D.C. website or inside the home-test packages, about when to test and what to do if someone tests positive.

“Those at-home kits have no instruction on what do if you test positive,” he said wearily.

Indeed, on the user instruction page inside a QuickVue At-Home Covid-19 test kit, in one corner under the heading, “Positive Covid-19 Result,” the only advice offered is to “self-isolate and seek follow-up care with your health care provider, as additional testing may be necessary.”

As a result, Dr. Dempsey said, “People test positive at home and then they come to see me right away. They walk right into my office, which is full of people.”

Instead, he recommends that if someone tests positive, they should call his office to set up a telemedicine conference over Zoom or FaceTime, to speak with a health care professional. “We can then pick a time to see you outside,” he said.

In December, the Biden administration announced a $1 billion plan to make 500 million over-the-counter tests more readily available for free. Now, a home kit with two tests sells at CVS for $25. A kit with one test was offered at White’s in East Hampton for $20.

Offering the population free home testing is based on the aggressive, and much lauded, British model, which was deployed early in 2021. Everyone in England was able to access free rapid coronavirus tests for themselves and their families, in order to test regularly. This infrastructure, which was also used in Australia, New Zealand, and Taiwan, helped pave the way for businesses and society to reopen. However, with surging Covid cases in Britain over the holiday period, many have raised questions about the limitations of self-testing.

“Home testing serves a purpose,” said Dr. Dempsey, adding that it might offer that peace of mind when meeting up with a friend or heading to school. “But they’re not reliable in terms of containing the spread,” he said.

It all goes back, he reiterated, to the need to better educate the population on how best to use the kits and when they are most accurate.

East Hampton Town, which now has CareOne Concierge operating a testing site at the East Hampton Town Center for Humanity on Stephen Hand’s Path, has provided testing through one vendor or another and monitored results since April 2020. It saw the highest rate of positive tests to date on the week ending Sunday, with 33.17 percent of tests administered coming back positive — four times the rate reported for the week ending Nov. 27.

In the week leading up to Christmas, “with all the travel and parties,” the town had over 1,000 people tested on Stephen Hand’s Path, Supervisor Peter Van Scoyoc said at a town board meeting on Tuesday. Because of the highly transmissible Omicron variant, “The infection rates are extremely high now everywhere,” he said.

Echoing Dr. Dempsey’s comments, he said, “I believe we are seeing the very end of this in terms of significant waves as we move away from the holiday season. . . . I am hoping to see, and I think some numbers have already indicated . . . the numbers are starting to decline.”

Reports from across the globe point to the fact that while Omicron might be a more highly contagious variant, it’s possibly a less deadly one, except for those who are unvaccinated. The Centers for Disease Control and Prevention has shortened its recommended isolation period for infected people, largely because of Omicron’s shorter incubation period.

New York Gov. Kathy Hochul announced on Tuesday that the state will be ending its contact tracing program, although individual counties can decide whether or not to continue some form of contact tracing.

Dr. Mary Bassett, the state’s health commissioner who was also present at Tuesday’s briefing, said, Omicron “has a very short incubation period and many more people are being tested.” Therefore, positive cases are no longer required to be reported to the State Health Department, she said. Instead, patients are advised to report results to their health care providers.

In East Hampton Town, providing vaccines to residents continues to be a priority. Town clinics have brought over 10,000 vaccine doses to people here since last February and appointments are still available for first, second, and booster doses at four clinics planned in February at Town Hall. Appointments can be made at bit.ly/3qJzLjO. Vaccines are also offered through Stony Brook Southampton Hospital (appointments at bit.ly/3t4u6rg), at some physicians’ offices, and by appointment at CVS and Walgreens.

“Concerns about serious illness and death are very real for the unvaccinated, and there’s still concern” for the immunocompromised and people who have had organ transplants or who are in treatment for cancer, Supervisor Van Scoyoc said Tuesday. “Even though you may be vaccinated and boosted, you can still carry the disease. . . . Keep your guard up for the next several weeks.”