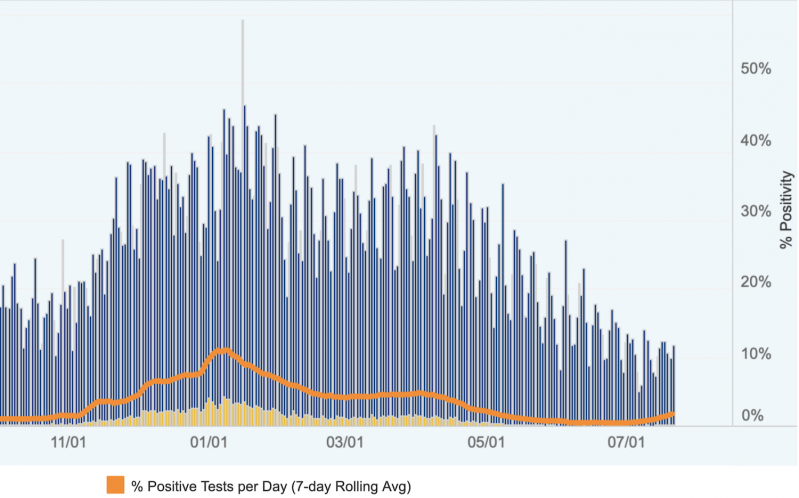 While the percentage of positive Covid-19 tests remains relatively low, a graph at ForwardNY.gov shows that they are trending upward. On Tuesday for Suffolk County, the state reported 125 positive results and a seven-day-average infection rate of 1.7 percent.
ForwardNY.gov
By Christopher Walsh

In the five weeks since Gov. Andrew M. Cuomo lifted most of the state's remaining Covid-related restrictions with the announcement that 70 percent of adults had received at least one dose of a Covid-19 vaccine, testing has dropped off significantly while the percentage of people testing positive for the virus has slowly but consistently ticked upward, leading to fears of yet another surge, this time almost entirely among the unvaccinated.

As investors took note of the highly contagious Delta variant, now estimated to account for more than 80 percent of new infections, and its potential to stall what has been a rapid and robust economic recovery, on Monday the Dow Jones industrial average fell 2.09 percent, its largest one-day loss of the year. The Standard and Poor's 500 index was down 1.59 percent, its worst decline since May.

The culprit in rising infections, experts say, is the segment of the population that has resisted vaccination. "We're going to get a third surge," Bettina Fries, chief of the infectious diseases division at Stony Brook Medicine, said matter-of-factly on Monday. "It will be all the people that are not vaccinated."

That could include children 11 and under; Covid-19 vaccines have received emergency-use authorization only for those 12 and up.

Along with the lifting of Covid restrictions on June 15, the governor also announced the demobilizing of drive-through testing sites across the state following "historically low positivity rates and an 88-percent decrease in drive-through testing demand from January to May." New York's infection rate at the time had declined for 71 straight days to .4 percent and was the lowest in the United States.

While the number of people contracting Covid-19 on Long Island remains low, the daily rate of positive tests on Sunday was 2.3 percent, the highest since April.

As of Monday, there was one Covid-19 patient at Stony Brook Southampton Hospital. There were five at Stony Brook University Hospital as of July 14, and none at Stony Brook Eastern Long Island Hospital in Greenport. Ninety-nine percent of patients admitted with Covid-19 are not vaccinated, Dr. Fries said.

"At this point, they are not seeing, at least, people that need to be hospitalized," said East Hampton Town Councilwoman Sylvia Overby. As of Tuesday, East Hampton Town had recorded 1,692 cases of Covid-19 since the beginning of the pandemic, or 77.45 per 1,000 residents, per county statistics.

Vaccination data by ZIP code, provided by the federal Centers for Disease Control, show high rates on the South Fork, with 82.8 percent of those eligible vaccinated in East Hampton, 78.9 percent in Montauk, and virtually all in Amagansett and Wainscott. For that reason, "I'm not going to be an alarmist as far as what could happen with variants down the road," Ms. Overby said. Vaccine manufacturers "are certainly looking at it. Right now they're not even saying we need a booster if vaccinated. There are breakthrough infections that we need to be concerned about" -- those who become infected despite being vaccinated -- "but those seem not to be lethal." However, she said, "people that are not vaccinated will continue to keep this pandemic going."

"Things have been quiet on my end," George Dempsey, medical director of East Hampton Family Medicine, said on Monday. "I haven't had any cases. I'm waiting for that to happen, but I think we're just well vaccinated out here, which is a blessing."

"On the flip side," he added, "what's really interesting is I'm seeing a lot of other sickness that I haven't seen in a long time. People are definitely relaxing, and the door is open, so if it does hit, we are definitely vulnerable in terms of our carefulness. . . . I think we should be a lot more careful."

"I hate to be the one to say shut down businesses, by any means," he continued, but given the throngs of visitors to the town in the summer, the rising infection rate should be "a word of caution for businesses. I would encourage all businesses to take all precautions, like before."

While there will be many new cases of Covid-19, said Dr. Fries, fewer will require hospitalization than in previous surges because those not vaccinated tend to be younger and less vulnerable to severe illness from the virus. "But they will get sick, and a certain percentage will come to the hospital, be intubated, and die. The only thing they can do is get vaccinated."

Many young people are resistant to vaccines because they don't believe that Covid-19 is a danger to them, Dr. Fries said. Others, she said, have been deceived by misinformation, or "it's part of their identity not to be forced to be vaccinated." On call last week, she said she asked patients who were hospitalized for other reasons if they had been vaccinated against Covid-19. She was surprised by how many had not been, she said, and by their hesitance. "Several were sick," she said, and "all are vulnerable. If they get it, they have a significant chance of dying."

"The misinformation out there is staggering," Ms. Overby agreed, "and I'm very disappointed that some folks can be that gullible. They've seen the results of this pandemic. That should tell them everything, and we know that people dying from the disease are people that haven't been vaccinated. That should be something that we do -- for ourselves, children, families, neighbors, the community -- to keep everyone safe. The way to do that is the vaccine, or stay home and don't go anywhere."

The data are "overwhelming" supporting vaccines' efficacy in protecting people against the Delta variant, Dr. Fries said. But "that doesn't mean you can't test positive. You could give it to somebody in your family. It could show up in a pre-travel screening, but in all likelihood, but for some exceptions, they're not going to get sick."

Nonetheless, "children over 2 should wear masks," Dr. Fries said, citing data from India, where the Delta variant was first identified and led to major outbreaks in the country of 1.3 billion. Before its emergence, "someone in the family would get it, a few others would get it, but big parts wouldn't. With Delta, one person gets it, everybody vulnerable gets it. It means more infections, no doubt about it."

Susan Donelan, medical director of healthcare epidemiology at Stony Brook Medicine, said that the Stony Brook University Hospital laboratory has been sending SARS-CoV-2 isolates to the state Health Department's Wadsworth Laboratory ECONYS sequencing pipeline for several months. "Since July 8, we have received additional information from Wadsworth that one of the samples was reflective of the Delta variant," she said. "The results are intended to give an overall sense of what is being transmitted locally, not necessarily specific percentages of transmission."

As with the Delta and other variants, medical professionals say, the longer the virus has an opportunity to mutate, the greater the possibility that a variant will emerge against which the vaccines are ineffective. "The more numbers, the more chances of mutation. It's purely statistical," Dr. Dempsey said. "I hope it doesn't hit here again, but it's a good time to reflect."

"The mutation is significant," said Dr. Fries. "When younger people tell me 'I don't need the vaccine because if I get it I won't get seriously sick,' they are right. What they don't understand is that you get vaccinated for two reasons: to protect yourself and the community -- not just some anonymous person, it means we as a community. Everybody who is not vaccinated becomes an incubator for the virus."

Dr. Fries continues to wear a mask -- usually two -- in crowded places and to observe protocols such as frequent hand washing. "Other than that, I go about my regular life, because I know I am vaccinated. I also get tested every week. We need to live with this, it's not going to go away anytime soon." She said that she does not favor a blanket mask requirement.

Covid-19 test sites remain at the Town Hall campus on Pantigo Road in East Hampton and by the boat launch ramp at Fort Pond in Montauk. Appointments can be made at testbeforeyougo.com, though walk-ins are also accepted. The vaccination site at the Stony Brook Southampton campus will cease operation at the end of Monday. Free vaccines remain available at many pharmacies, and the vaccine is also available at physicians' offices.

At the town board's work session on Tuesday, Supervisor Peter Van Scoyoc said that some people being tested prior to traveling are "finding they are testing positive but are asymptomatic, largely because the vaccine works."

To counter resistance to vaccines, "I try to validate their concerns," Dr. Fries said. "It was understandable in the beginning, but there is no vaccine in this world, there is no medication in the world that has been so thoroughly investigated for side effects."

"If you look at any pandemic -- smallpox, measles, polio -- we only fought it successfully with vaccinations."