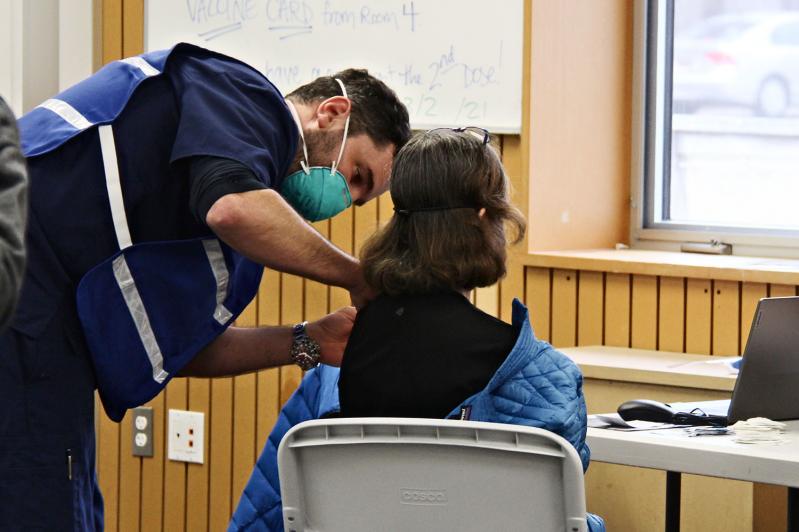 A volunteer administered a dose of the Pfizer vaccine at an East Hampton Town vaccination clinic in March. With the help of Stony Brook Southampton Hospital and East End Pediatrics, the town has been able to fully deliver vaccines to 4,347 people at its clinics on Stephen Hand's Path.
Durell Godfrey
By Christine Sampson

New York State Gov. Andrew M. Cuomo said this week that when 70 percent of the state's adult population has gotten at least one dose of a Covid-19 vaccine most of the remaining pandemic restrictions will be lifted. While much of the rest of New York State has yet to reach that mark, East Hampton Town has already surpassed it, Supervisor Peter Van Scoyoc announced Tuesday.

In Montauk and Amagansett together, 83.6 percent of adults have been vaccinated, and in the East Hampton 11937 zip code — including East Hampton Village, areas near the village, Springs, and Northwest Woods — 72.5 percent of residents are vaccinated. Numbers were not available for Wainscott. An East Hampton Town official said yesterday that the data had been drawn from a Newsday report published in late May, and clarified that those numbers also include individuals who received shots out of town.

"While the restrictions won't be lifted here yet, people can be more confident that public health is at a much, much lower risk than before," Mr. Van Scoyoc said in an interview yesterday. "That's the result of being able to get a local vaccine center early on. We started vaccinating residents in mid-February when the vaccine was hard to come by."

He recalled that for the first vaccine doses we picked up, "I had a police escort — that's how valuable they were, in such short supply, and now we're getting to a point where we're searching for arms that haven't received shots."

Continuing that effort, there will be a Moderna vaccine clinic, with both first and second doses available, today at the Montauk Playhouse Community Center from 4 to 8 p.m. A Pfizer vaccine clinic for children ages 12 to 18 is scheduled for Saturday at the East Hampton Town vaccination center on Stephen Hand's Path.

The supervisor thanked the volunteers who helped at the clinics, saying, "It's one thing to have a vision and try to chart a course. Without the volunteers that we had, none of this would be possible."

But we're not entirely out of the woods yet, Mr. Van Scoyoc said.

"While we have successfully addressed the public health crisis, there are going to be many repercussions from the pandemic that continue into the future that we will need to address," he said. "We had a housing crisis before the pandemic that has only become so much worse. . . . If we become more of a year-round community with a higher population, that brings with it a number of issues and challenges as well -- everything from environmental impacts to the services and budgetary impacts."

Governor Cuomo on Tuesday announced that statewide, the seven-day average Covid-19 infection rate has declined for 64 straight days and stood at .51 percent -- "the lowest in the country as per Johns Hopkins University," he said. Long Island's seven-day average infection rate was even lower at .45 percent, with Suffolk County coming in at .4 percent. Suffolk saw just 32 cases of Covid reported from Monday's testing data, whereas just a few months ago, that number was routinely in the hundreds or over 1,000.

"Covid positivity rates keep falling every day and it's a direct result of the hard work and commitment New Yorkers have displayed throughout this entire pandemic," Governor Cuomo said in a statement on Tuesday. "We have never been closer to the light at the end of the tunnel, but to fully return to normal, we must continue to do all we can to get New Yorkers vaccinated."

Stony Brook Southampton Hospital has seen just one patient with Covid-19 in the last five days, and that patient did not require an intensive care stay, according to a hospital spokesperson.

"The good news is that the people at highest risk, who are over 65 or are health care workers, we've really protected those individuals," Dr. Weinbaum said. "Now our goal is to get everyone else protected. . . . If you only had one dose, get the second dose, please. Now is not the time to say 'this is over.' "

Stony Brook Southampton Hospital, with assistance from the main Stony Brook Medicine organization for supplies and other resources, had vaccinated about 75,000 people as of yesterday.

During the two-week period leading up to June 5, only one case of Covid-19 was reported in the East Hampton School District — occurring at the John M. Marshall Elementary School, where children are generally too young to receive vaccine shots. East Hampton has had 200 total cases among students and staff since September. In the two weeks before June 5, no cases had been reported at the Springs School, Amagansett School, Montauk School, or Bridgehampton School. The same goes for the Sag Harbor School District and the Wainscott and Sagaponack Schools.

The governor urged schools to work with their school nurses and their municipalities to get children 12 to 17 vaccinated, with parental permission, before the start of summer vacation. "They're in school, they're there now, you have them in one place," he said.

And on Monday, Suffolk County Executive Steve Bellone announced an initiative called #CampVax that will incentivize parents to have their children ages 12 to 17 vaccinated ahead of the start of summer so that kids and teen counselors will have safer camp environments. The county will be offering free ice cream cones and tickets to Splish Splash Water Park, Adventureland Amusement Park, and the Long Island Aquarium for children in that age group who receive the Pfizer vaccine.

In New York State, as of Tuesday, 68.9 percent of residents 18 and older had gotten at least one dose of a Covid-19 vaccine, according to numbers from the Centers for Disease Control, and 59.8 had completed their vaccine series. Including all eligible New Yorkers, not only those over 18, the rates were 56.9 percent with at least one dose and 48.4 with a completed vaccine series.

When the 70 percent mark is hit, many of the state's guidelines, "including capacity restrictions, social distancing, cleaning and disinfection, health screening, and contact information for tracing -- will become optional for retail, food services, offices, gyms and fitness centers, amusement and family entertainment, hair salons, barbershops, and personal care services, among other commercial settings," the governor said Monday. Even after getting to that mark, guidelines will remain in place for large event venues, schools, public transit, congregate housing, correctional facilities, nursing homes, and in health care settings, pending new guidance from the C.D.C., "but we hit 70 percent, we will be back to life as normal, or as normalized as you can be post-Covid," the governor said.

This week, following new recommendations from the C.D.C., the governor officially gave school districts more control over masking rules, saying Monday that students can go mask-free when they are outdoors. Indoor mask mandates remain in effect.