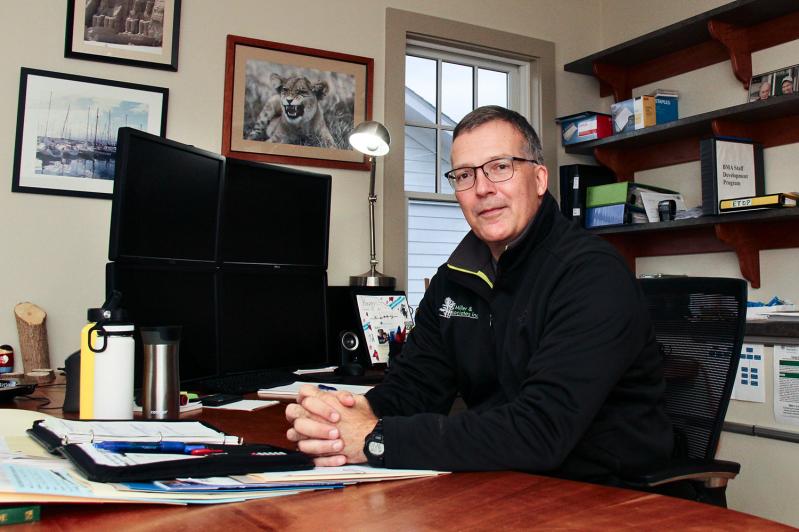 David Beard of Sag Harbor has become something of an expert Covid-19 tracker.
Durell Godfrey
By Christine Sampson

Even though Stony Brook Southampton Hospital has the largest number of admitted Covid-19 patients it has seen in about two months — 11 people as of Tuesday afternoon, none in the intensive care unit — there is good news to be had, the hospital’s chief medical officer said this week.

“Our trend is to see fewer people requiring intensive care and mechanical ventilation,” Dr. Frederic I. Weinbaum said. “That’s a good trend, and I think that’s largely attributable to the impact of vaccines.”

Most of the hospital’s recent cases are seen in unvaccinated people and people over 65 who have additional serious health conditions, Dr. Weinbaum said. The hospital continues to detect the Delta variant in most of its Covid patients and had not seen any cases of the Omicron variant as of early this week. Of that new strain, first detected by doctors in South Africa on Nov. 24, less is known. There were 14 known cases in all of New York State as of Tuesday, including several in Suffolk County.

“I think that we all are feeling a certain anxiety about what may happen, but there’s no cause for panic,” Dr. Weinbaum said. “We have available supplies, available treatments, and bed capacity if need be. Our hope is that if the initial suggestions are correct it will be less severe, and for people who are fully vaccinated and boosted, there will be some level of protection against the most severe infections.”

On that front, East Hampton Town has been ramping up the number of vaccine clinics it holds. Each time it holds them, Supervisor Peter Van Scoyoc said this week, around 130 people can receive shots.

Appointments at Town Hall are filling up fast, and were all spoken for this week and next, but new clinics have been added on two dates later this month and four dates in January. The Pfizer, Moderna, and Johnson and Johnson vaccines will be available, and people can get first doses, second doses of the Moderna or Pfizer shot, or booster shots. Pediatric vaccines will not be offered, and for now, boosters are only available to those 16 and older.

Daytime clinics are planned from 9 a.m. to 4 p.m. on Dec. 28, Jan. 5, Jan. 19, and Jan. 24, and evening clinics will be held from 4 to 8 p.m. on Dec. 22 and Jan. 10. Vaccinations are free, but people with insurance are asked to take along their insurance cards and proof of prior vaccination if they are getting second doses or booster shots. Appointments can be made online at COVID19VaccinesTOEH.as.me/.

Data from the East Hampton Town Covid-testing facility suggests that Covid-19 cases had something of a spike right around Thanksgiving. Between Nov. 21 and Nov. 27, 8.15 percent of the 368 people tested were positive.

“Thankfully, that has gone down at a pretty sharp rate” since then, Mr. Van Scoyoc said at this week’s town board meeting.

East Hampton’s seven-day positivity rate was at 5.6 percent in the most recent period, during which 411 people were tested in the week ending Saturday. Suffolk County’s rate was 6.2 percent at that time. Still, those case numbers represent an increase of more than three times the rate from three months ago, which was 1.75 percent on Oct. 7.

In addition to hospital and town officials, at least one more person has his eye on Covid rates here, nationally, and internationally. Since early in the pandemic, David Beard of Sag Harbor has been writing data-driven dispatches for friends, fellow business owners, and an increasing number of people generally interested in receiving information streamlined into digestible bites. Something of an expert at this point, his weekly email blast now reaches about 500 people.

He recommends that whenever possible, people should consider the straight-up numbers, rather than “headlines that scream ‘record number of cases.’ “

“The reason you should look at data is to take the emotions out of your decisions,” said Mr. Beard, who co-owns the Water Mill tree and plant care business Bill Miller and Associates along with Cristina Thorp and Matthew Hartline. “Some people are freaked out about Omicron and some people don’t care. There are times when infections have picked up or gotten better. I always say use the data to help judge your emotional state.”

Using the reporting expertise he employed when he worked on Wall Street, Mr. Beard spends about five hours each weekend preparing these dispatches. “It sort of keeps me grounded to what’s really happening out here,” he said. “A lot of people will email me saying, ‘I can’t watch the news, but I read your report on Monday morning and I’m set for the week.’ Personally, that gives me a lot of satisfaction when people can take what I write and it makes their life better.”

In this week’s report, for instance, Mr. Beard writes: “Omicron is around three times more likely to infect vaccinated people than is Delta. The silver lining here is that the globe could reach natural herd immunity quite quickly, potentially ending the worst outcomes of the global pandemic. Good news, longer-term.”

Dr. Weinbaum’s own assessment appears to echo that. “There’s going to be a time when Omicron will be more prevalent, and exactly how that will present and whether or not those individuals will require hospitalization remains to be seen,” he said. “What has been reported is that the initial consumption of oxygen and requirement for intensive care and hospitalization in South Africa was lower than what would have been anticipated from earlier variants. That’s an encouraging report.”

Speaking again of vaccines, with holiday gatherings starting up again recently and likely continuing for a few more weeks, Dr. Weinbaum recommended that hosts and guests should be vaccinated or boosted, or should at least try to learn whether other partygoers are vaccinated. He also suggested testing beforehand.

“If you have a group of people where the vaccination status is unknown, that represents a higher risk of being in an indoor congregate setting without masks and protective equipment. The safest thing is to know the vaccination status,” he said. “Some people will somehow be offended by the question. Why, I don’t know. It’s a matter of health. . . . It’s not unreasonable to ask a family member who is unvaccinated to be tested before they attend a family gathering. What’s necessary to protect your family?”

With Reporting by Carissa Katz and Christopher Walsh