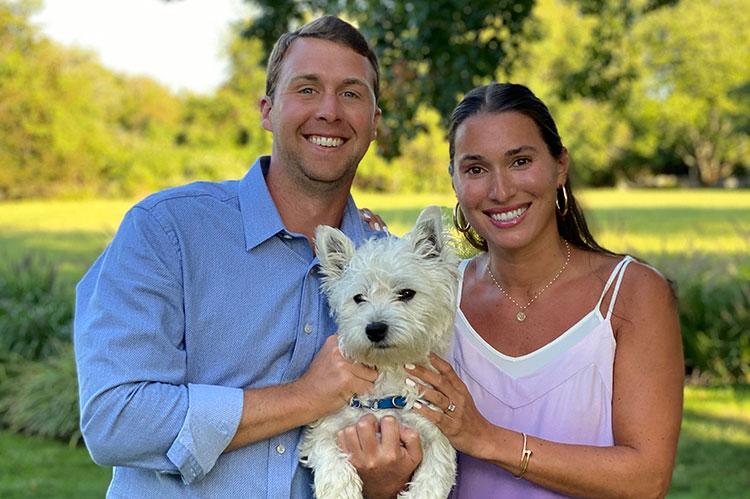 Pandemic logistics may have thrown a wrench in their ring shopping this spring, but on Friday, with the place to themselves for a few hours, Whit Harwood and Sarah Scrudato became engaged at the Bridgehampton house where they first met.
By Bella Lewis

To say, "it was a long winter" seems to say, "too long a winter." But "it was a long summer" sounds more like an expression of gratitude than an observation of time. If summer is a meander and winter stays the course, what happened when Covid turned summer frosty? What did people do instead?

The pandemic kept many people apart, but it also brought people back together. In East Hampton, take, for example, a couple who separated after 31 years back in October, but decided for three months during Covid to move back in together, not to get back together, but to practice staying in each other's lives.

Many also took joy in more of the same. Nicole Young, for one, flew back from India. The 67-year-old Springs resident had left on March 3 with her partner for a "highly planned" trip. It took three full days before her boyfriend gave her the look that meant it was time for them to go home.

She was nevertheless grateful for the 72 hours and has no regrets, beyond not staying longer. "It was like having a feast before you go on a diet," she said.

The silver linings: Her garden, her swims in the bay, sunflowers planted by her son, and "right now I'm watching birds taking a bath from my window and they're taking turns. It's so cute," she said.

For Darlene Salatto Rose of East Hampton Village, 65, a large part of the summer was spent grieving the death of her dog and then her sister, who had been battling cancer for a long while. Just as immediate as her loss, however, were the reasons to go on. "This has not been the best of times, and that's been my reality this summer, but there are many, many joys. And we live in a beautiful place and just being able to witness the sky, the sun, the stars. I'm spending a lot of time stargazing."

Luke Clark, 60, of East Hampton also experienced great loss this year. His mother died at the beginning of March in the United Kingdom. Lockdown restrictions here and there meant his family could not go to her funeral. "Instead of a proper family send-off, it was just my sister and brother-in-law."

He still considered the little things as humorous punctuation to an unfortunate time. His daughter "came home for spring break and then her college moved everything online. As a result, she spent a disproportionate amount of time with her head on the kitchen table," he said.

For one Springs couple, Ricardo Martinez, 58, and his husband, Punyadech Photangtham, a 51-year-old frontline doctor, some social curtailment is not the worst thing in the world. "For us the ongoing joke is that Covid is the perfect excuse to 'clean up' our friends list," Mr. Martinez said, laughing. He and his husband tested positive for both Covid and antibodies back in March and are counting on their inner circle to make up their poolside, rosŽ-sipping cohort.

Shawn Miller knows well people's desire to make the most of their pools this summer. "I definitely had people calling me and emailing me saying, 'It looks like the end of the world, so can you please open my pool,' " said Mr. Miller, 49, who owns East Hampton Poolshark. His business was not "pandemic-proof, but it's been a pretty solid business in a downturned economy twice. . . . We work outside and we work with chlorinated water. If anyone could work, we could work!"

Looking back at the summer, Robin Aviv, 59, of Water Mill considered the unprecedented success of the annual fund-raiser for her organization Generation SOS, which empowers youth to make informed decisions about substance use. "It could have been a disaster," she said of the backyard concert she had planned on an acre of flat lawn in Bridgehampton.

After what she called the "Chainsmokers fiasco, a lot of people had a lot of negative feedback for us," she said, referencing the much-criticized Bridgehampton concert earlier in the summer. With extreme precautionary measures and a few ex-police officers on duty, the Livingston Taylor concert with about 20 pods of people went off without a hitch. She credits the success to many high school and college-age kids, whose various summer internships were canceled, making them available to help the cause.

Stacy Dermont celebrated the release of her first book, "The Hamptons Kitchen," which she coauthored with Hillary Davis, in April, and it was the greatest joy of her life, and a terrible time for it. But it has done well despite the lack of in-person promotional events.

"The whole impetus for the cookbook is really a microcosm of what I think we appreciate more now. If we had intended to write it for Covid, we could not have been more on the mark. It's so strange to me because it's really all about entertaining really small groups in your home and using everything that is both local to you and seasonal."

It seems that for many, Covid did not make anything more true than it was before, it just made people more honest about what they had.

Steven Salzman, 63, of East Hampton, decided last year before any of this, to retire and close his New York City law office. He couldn't bring himself to give up the city apartment though, until he saw people fighting over food at a grocery store.

"Covid absolutely confirmed the decision. It just basically forced me to do it and then I realized, 'Oh my god, I can't believe I didn't do this years ago,' " said Mr. Salzman, who was getting ready while he talked to head out on a 25-mile bike ride on a "gorgeous, gorgeous day."

Similarly, Roy Cohen, 64, of East Hampton Village, let go of his office in the city. It used to be important for clients calling from abroad to know he had a place there. "Now clients ask, 'Do you meet virtually?' Having an office started to seem mostly quaint." As a survivor of Covid himself, his remote work helps him stay careful.

"As much as it's weird to be using my high school desk in my childhood bedroom," said Laura De Giorgis, who is working from her family's Sagaponack house, the transition to quarantine was not as jarring for her as it was for some.

Ms. De Giorgis's life and work is in a rural part of Kenya. "You're not going to happy hour every given Thursday, going shopping, going to the supermarket and knowing everything will be there. I think I was slightly more conditioned to find joy in that walk, that can of tuna . . . that is a blessing. Toilet paper will come next time!" she said. Desk risers helped transition her childhood study space to adult proportions.

Across the East End, people recovered the spirit of summer by sharing Ms. De Giorgis's habit of "finding joys in the little things," and some not so little.

Whit Harwood, 28, and Sarah Scrudato, 29, last perused the Diamond District on March 8 before shop doors were shuttered. Then they spent three months living with Ms. Scrudato's family in Vermont and three months with Mr. Harwood's in Bridgehampton. When that actually works, could the game be any more afoot?

All things considered, all things Covid, time slipped further toward the heels of summer than the couple had in mind back in March.

Finally, on Friday, Mr. Harwood arranged for both families to come over, but only after 6 p.m. He needed Ms. Scrudato and Montgomery, their dog, alone in his Bridgehampton backyard. He had a question. The answer was yes. For some things, it takes more than a pandemic.