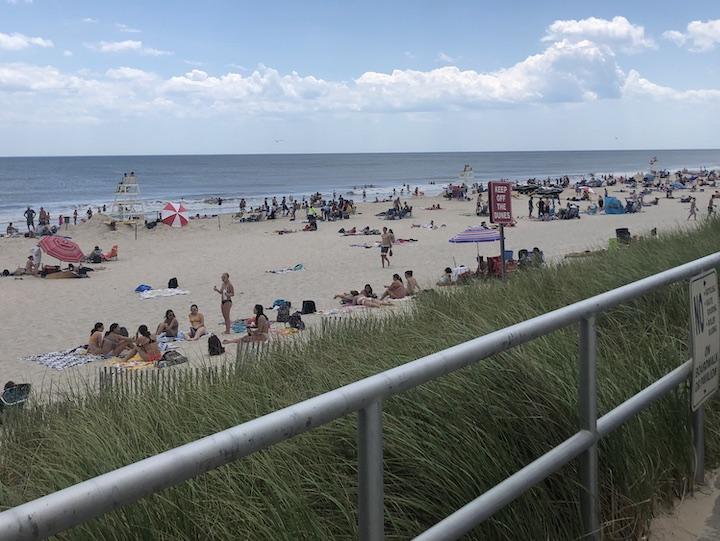 A sunny day at Smith Point County Park in June of 2019.
Christine Sampson
By Christopher Walsh

As Suffolk County nears the point of meeting the seven criteria set by Gov. Andrew M. Cuomo for a region to begin a phased reopening, County Executive Steve Bellone announced on Monday that the county’s ocean beaches will open this weekend to residents only.

“As we move forward here and prepare for opening,” Mr. Bellone said in remarks to the press on Monday afternoon, “because of the limited capacity that we will have . . . and because there are a number of facilities that likely will not be opening at the same time, Memorial Day weekend we will be reserving Suffolk County beaches at Smith Point [in Shirley] and Cupsogue Beach [in Westhampton Beach] for residents only.”

Proof of residency comes in the form of the county’s Green Key card, which costs $30 and is good for three years. Starting Memorial Day weekend they will be available at both Cupsogue and Smith Point.

“My priority is to make sure Suffolk County residents will be able to enjoy access to the beaches during this crisis, while we do have reduced capacity. That planning continues, and we are looking forward to opening and welcoming people to our beaches with Covid safety rules in place so we can kick off the traditional start to the summer season.”

Mr. Bellone said Suffolk has met six of seven criteria for a region to launch the first of a four-phase reopening (Suffolk and Nassau Counties are grouped as a single region under the governor’s New York Forward reopening initiative). The county has yet to meet one criterion, a 14-day decline in hospital deaths or fewer than five deaths per day over a three-day rolling average. While the state’s regional monitoring dashboard lists five of seven metrics met, Mr. Bellone said that the requirement of 30 contact tracers per 1,000 residents will soon be satisfied. “This is one we’ve always been confident we would not have an issue with,” he said.

Contact tracers are charged with identifying people who may have come into contact with a Covid-19-infected person and collecting further information about those contacts. Mr. Bellone said that 230 contact tracers have been hired, and Bloomberg Philanthropies, which with former New York City Mayor Michael Bloomberg donated $10.5 million to the state’s contact tracing effort, is “onboarding the additional contact tracers now and will be training them this week.”

As of Sunday, 505 people were hospitalized with Covid-19, the executive said, a decrease of eight from the day before. The number in intensive care unit beds had decreased by seven, to 169.

The county’s hospitals have 901 beds available, of 2,948 over all, putting the county on the edge of the criterion that a region have at least 30 percent of its hospital beds available. Of 574 intensive care unit beds, 208 are available.

Forty-seven people were discharged over the previous 24 hours, Mr. Bellone said, calling that statistic “very good news.” Six people had died of Covid-19 in the same span. “If there is any solace we take,” he said of that statistic, “we’ve not been at that level in a long, long time.”