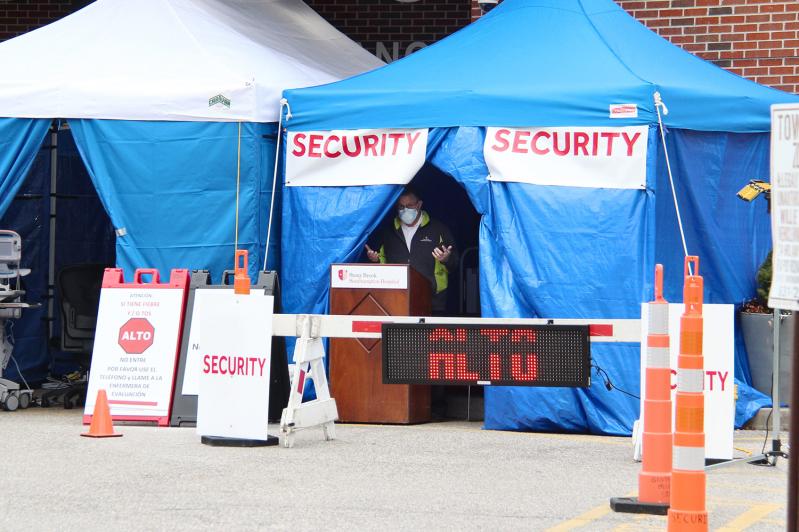 Stony Brook Southampton Hospital is rushing to double its capacity as Covid-19 sweeps across the state, but South Fork residents who worry that the pandemic is taking up all of the hospital’s time and resources will be comforted to know that all emergency and emergent care cases are still being addressed, with no plans to discontinue those services.

Even as the hospital continues to marshal resources to deal with the virus, “We are not stopping any of the emergency services that we do,” Robert Chaloner, the hospital’s chief administrative officer, said by phone on Tuesday.

The increased population of second-home owners who have fled to the area, has not increased the number of patients the hospital is treating in a significant way. “To be honest, we’re not seeing it yet. We’ve seen a few patients, but it’s not been a flood of patients as a result of that. . . . Whether or not that holds true in the future, I’m not sure,” Mr. Chaloner said.

“We have 100 years of experience of flexing up and down for weekends and summers. I’m confident that if we see an uptick we’ll keep up with it,” he added. ­

The hospital has postponed elective surgeries to free up those departments, but “we still see people who have chest pains. We’re still delivering babies. We’re doing all the things that are required to take care of people in emergent and emergency situations.” That includes patients with a cancer diagnosis who need a procedure to help stave off the illness, women with a suspicious lump in their breasts, or broken bone surgeries, he said.

“Anything that can’t be postponed, we continue to do those things, and obviously delivering a baby can’t be postponed.” Although the hospital has eliminated visitors in all areas, it is still allowing birth partners into the delivery room, as long as they have been screened for fevers and other signs of illness.

And all of those services will continue in the coming weeks. “We’re too remote to move them, we have to continue to provide them,” Mr. Chaloner said. The hospital continues to operate its cardiac catheterization lab and serves as advanced heart attack treatment center as well, meaning it has a dedicated crew on standby within a certain distance of the hospital.

Patients being treated for non-virus-related illnesses are also being separated from the Covid-19 cases, with, for example, cardiac patients set up in the rehabilitation gym, which has been transformed into a telemetry-monitored unit to keep track of the electrical activity of patients’ hearts.

As for Covid-19 operations, Mr. Chaloner said the hospital has the equipment to run more and faster tests, but not the test media necessary, which is likely going to the city first. For now, it continues to use the state lab and is limited in who it can test. “We are testing everyone who is important from our perspective.” This includes all people who may have to be hospitalized (so as not to put an infected person next to one who is not), people at high risk before they are sent home, and employees.

The hospital has 21 ventilators, with an additional 5 donated Tuesday by the Hamptons Health Society. Gov. Andrew M. Cuomo said in recent press conferences that any bed with a ventilator could be considered an intensive care bed. Mr. Chaloner said the state previously had much stricter requirements for designating an I.C.U. bed. Relaxing those standards for the pandemic has tripled Stony Brook Southampton’s capacity from 7 to 21 beds so far.

As of Tuesday, half of the beds are occupied, but not all of them by Covid-19 patients. Mr. Chaloner would not elaborate on the breakdown because, he said, one day’s snapshot would not accurately portray conditions that are changing moment to moment. “Suffice it to say, it’s a relatively low number given our overall bed size. It’s not an overwhelming number for us and we don’t anticipate it will overwhelm us, because we’re opening capacity” by targeting beds in nearby areas on the medical surgery floors and looking for more ventilators. “We’ve got what we need, but we’re looking high and low for more.”

He said it was “absolutely not true at all that the hospital units are full,” as had been reported by several media outlets quoting a nurse. “Prior to Covid, this has been our slow time of year,” with plenty of open space. He said the number of patients has grown but is staying under control.

Before the pandemic, Stony Brook Southampton had staff for 94 beds. It plans to double the number of beds to 188 and had added 45 of them as of Monday. “Probably all but 10 are sitting empty right now. We’re quickly bringing it up to full capacity” and should have all 188 available in two to three weeks, when the number of patients is expected to be at its highest, Mr. Chaloner said.

He said that medical supplies are keeping up with demand and that the hospitals in the Stony Brook system, which includes Eastern Long Island Hospital, have always moved supplies between them as need dictated. That is in addition to what Mr. Cuomo has said this week would be a statewide pool of resources to put them where the need is most critical. In New York State “there’s no formal swapping of supplies today, but that could change given what the government says,” Mr. Chaloner said.

Stony Brook University Hospital is providing Southampton with specialists in the latest protocols for the use of personal protective equipment and when and how to test patients.

A standing call at 9 a.m. every day allows the hospitals to compare notes on patients, supply availability, and other issues that come up. They are expanding the number of people on staff who know how to use ventilators through training with a Stony Brook faculty member. The hospitals’ nursing staffs are also in regular communication with each other.

Mr. Chaloner said Southampton is following changing guidelines as they are released about whether and when it is okay to reuse supplies. “Employees are the resource I want to protect more than anything else. I can always get my hands on more supplies, but I can’t get my hands on more nurses quickly.” He applauded the staff for “putting themselves right in the line of fire. They’re brave and they’re capable and we can’t thank them enough.”

Many of Stony Brook Southampton’s medical staff members have been redeployed from elective surgery roles. Retirees and semi-retirees have volunteered for shifts. The governor has encouraged hospitals to use even physical therapists in supportive roles.

Mr. Chaloner asked that people in East Hampton Town not wait long to go to the hospital if they are very sick. Living “way up in Northwest Woods,” he said, he understood how the distance to the hospital from East Hampton leads to lower emergency room use. “There’s a hassle factor . . . but I don’t want people to wait if they have breathing issues. Don’t let travel time be an impediment. Don’t wait.”

East Hampton Samples Are a Crucial Contributor to Lyme Test
Ready to Adopt a Pet? ARF Is Ready, Too
Guild Hall's Curator Visiting Studios Virtually Through June
Seeking Stories and Images From the Time of Covid
END_OF_DOCUMENT_TOKEN_TO_BE_REPLACED