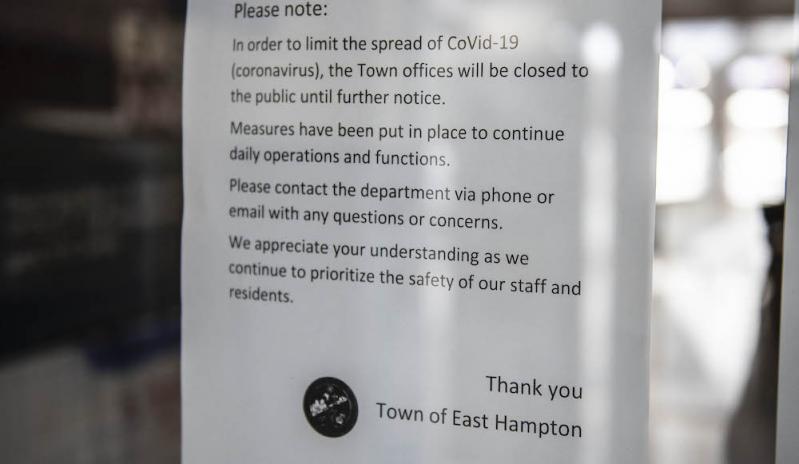 As the United States enters a critical phase in the novel coronavirus pandemic, many of East Hampton Town government's departments will reduce staffing to approximately 50 percent starting on Wednesday, Supervisor Peter Van Scoyoc said Tuesday. Essential departments including the police, highway, buildings and grounds, and sanitation will continue to operate, the supervisor said.

In an abbreviated work session with four of the five members of the town board in the otherwise empty meeting room and seated at a distance from one another, Mr. Van Scoyoc urged that only essential services and businesses remain open to the public, including grocery stores, gas stations, pharmacies, and medical facilities.

All meetings of appointed boards, including the planning board, zoning board of appeals, and architectural review board, have been canceled. Councilwoman Sylvia Overby said that JoAnne Pahwul, the planning director, is contacting applicants to ensure they understand that their hearings are postponed until further notice. A meeting of the town's energy sustainability committee took place on Monday via videoconference.

Expired permits are automatically extended, Mr. Van Scoyoc said. Those seeking to update a rental registry form can do so by mail. Those with critical business with the town have been asked to contact the appropriate department. "If it's deemed critical, we'll make arrangements," Mr. Van Scoyoc said.

As of Tuesday morning, two cases of COVID-19 infection had been recorded within the town. "I believe there are many more in the community," Mr. Van Scoyoc said. "Because of very limited testing abilities, we can't know how many there actually are."

"This is a rapidly evolving situation that will affect all sectors of our community," he said, imploring residents to practice essential hygiene protocols including frequent hand washing with soap and water, disinfecting frequently used surfaces, remaining at home unless absolutely necessary, and remaining at least six feet away from others if one has to go out. "If we institute all these simple protocols, we will have an effect on the spread of this disease," he said. He referred to Gov. Andrew M. Cuomo's executive order issued on Monday mandating that gyms and theaters close until further notice and that bars and restaurants serve food only on a takeout or delivery basis.

Councilwoman Kathee Burke-Gonzalez told her colleagues and the audience watching on LTV that residents 60 and over can call the town's Human Services Department at 631-329-6939 if they need help. "We're picking up and dropping off medicine, food shopping for people in need, picking up bags of food from the food pantry and dropping off."

Starting on Thursday, the Stop and Shop supermarket in East Hampton Village will open exclusively to those over 60 years old from 6 to 7:30 a.m., Ms. Burke-Gonzalez said. Identifications will not be checked to verify a customer's age, but "please respect the purpose of the early opening," she said.

The town is also referring senior citizens to the Meals on Wheels and the R.S.V.P. services, the latter a volunteer-led initiative to socialize with and inquire as to senior citizens' well-being via telephone. Both services are fully staffed, Ms. Burke-Gonzalez said, referring to inquiries from residents offering to help.

Mr. Van Scoyoc also referred to having observed "a number of simple acts of kindness during these stressful times, which reinforce our general well-being and let us know just how wonderful it is to be in a community that cares about each other." Nonetheless, he appealed to residents to remain vigilant in consideration of their neighbors and the wider community. "We have enough food and supplies to get us through this growing crisis," he said, "but we need to think not only of ourselves. It is time to think of other families, friends, and neighbors who might need supplies, and purchase only what you need. Also consider those . . . who will need extra assistance -- those who live paycheck to paycheck but may now find themselves out of work."

"We've faced many storms in East Hampton over our history -- blizzards, northeasters, hurricanes," Mr. Van Scoyoc said. "No storm has been as insidious as coronavirus, COVID-19. It is a serious disease which threatens both young and old adults, wealthy and poor. This is a worldwide pandemic and has changed life as we know it. But unlike a hurricane, this storm surge can be flattened, its effects can be blunted. Again, I ask that everyone work together, be patient, be calm. We'll get through this just fine if we follow these simple steps."

As of Monday, Suffolk County had recorded 74 cases and 3 fatalities, Mr. Van Scoyoc said. (The county had 84 by Tuesday morning.) Another 297 possible cases were being tracked. "We've seen an explosion on the North Fork and [in] other communities." Residents should make every effort to remain healthy, he said; even catching the common cold should be avoided. "Those with immune deficiencies or an underlying health problem should be especially careful" given their vulnerability to serious illness should they contract COVID-19, but younger adults are also at risk.

The novel coronavirus does not appear to affect children, he said, but children can nonetheless be carriers, and therefore transmitters, of the virus without exhibiting symptoms. "Just because schools are out, children should not be on playdates," he said, and they should be kept close to home.

"We're in a really critical time to be able to blunt and flatten the curve of this outbreak," the supervisor said. "Hopefully, we can return as quickly as possible to normalcy." That, he said, is heavily dependent on following the detailed hygiene protocols.