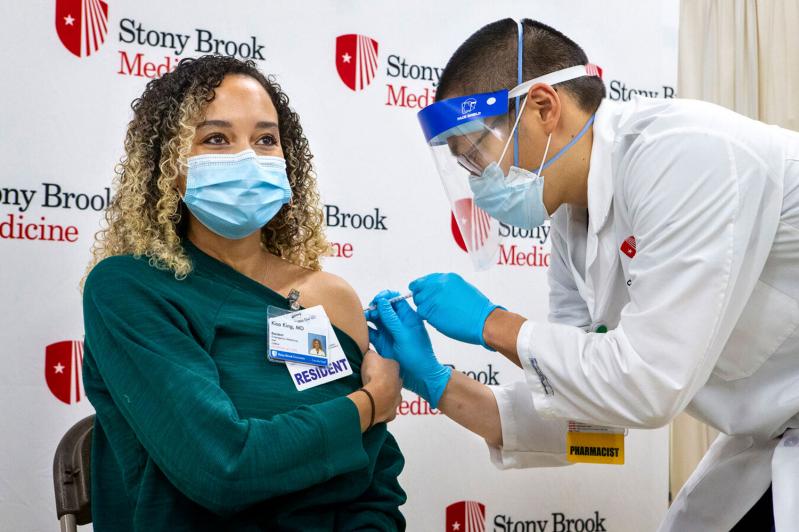 On Monday New York State began distributing 170,000 doses of a coronavirus vaccine, including 26,500 doses designated for Long Island, which will be used to inoculate high-risk groups such as health care workers, nursing home residents and staff, and emergency medical services personnel.

"We have planes, trains, and automobiles moving this all over the state right now," said Gov. Andrew M. Cuomo, who watched remotely as Sandra Lindsay, a critical care nurse from Queens, received the first shot administered in the United States.

The vaccine, developed by Pfizer and BioNTech, was approved for emergency use by the Food and Drug Administration on Friday, and one from Moderna is expected to receive authorization tomorrow according to The New York Times. The state has purchased 346,000 doses of the Moderna vaccine, and plans to begin distributing them on Monday, Governor Cuomo said at a news conference last week.

To remain effective, the Pfizer and the Moderna vaccines need to be stored at ultra-cold temperatures -- minus 94 Fahrenheit for the former, and minus 4 Fahrenheit for the latter -- and Dr. Fredric I. Weinbaum, the chief medical officer at Stony Brook Southampton Hospital, has said the hospital has tissue freezers and the capacity to manufacture dry ice on site to accommodate such storage.

The state has a five-phase plan to distribute the vaccine based on availability. It gives first priority to health care workers, emergency medical services personnel, and the staff and most vulnerable residents at long-term care facilities.

That population consists of 1.5 million people, Robert Mujica, the state's director of the budget, said on Friday. The 536,000 doses of vaccine that will be available once the Moderna one is approved "gets us through one-third of those categories," he said.

In phase two, priority will be given to first responders, teachers, school staff, child care providers, public health workers, essential workers who interact with the public such as grocery store clerks, transit workers, and pharmacy staff, those responsible for maintaining critical infrastructure, other residents of long-term care facilities, and members of the general public deemed "particularly high risk" because of health concerns.

The vaccine will be available to people over 65, and those under 65 with health conditions in phase three, to workers in other essential businesses such as construction, finance, and media in phase four, and to healthy adults and children in phase five.

In each phase of the plan, those in regions with a high infection rate will be given priority over those in ones with a low infection rate. "New York will also consider whether the vaccine can be used effectively as a potential outbreak interruption strategy," the plan says.

Vaccines will be free to all New Yorkers, the governor said Tuesday. A website, Vaccinate New York, can be found at ny.gov/vaccine. The state will establish regional vaccination hubs, with local hospital systems leading those hubs, based on state guidelines and pending state approval of each regional plan. Northwell Health Systems will administer Long Island’s regional vaccination hub, the governor said.

He described the vaccine as "the weapon that ends the war" but warned that the battle against the virus will continue until between 75 and 85 percent of the population is vaccinated, which will take months. "It could be June, it could be September," he said. "We can't get complacent."

Test results from Monday showed 1,171 new infections in Suffolk County, according to the state; it was the 11th time this month the new number of cases had exceeded 1,000. The seven-day average of positive tests in the county has been above 6 percent since Dec. 6. The daily rate reached 6.57 percent on Monday.

East Hampton Town, like the county, has "seen a steady and rather dramatic increase" in positive cases, Supervisor Peter Van Scoyoc said on Tuesday. In just a week between Dec. 6 and Sunday, he said, there had been 70 new cases in the town, bringing the total as of Sunday to 613.

Contact tracing efforts have found that small indoor gatherings are responsible for nearly 74 percent of new cases in the state, according to Governor Cuomo's office, and just as Thanksgiving gatherings resulted in an uptick in cases, the same will likely occur after the upcoming holiday season, the governor said. "We expect the surge to level off in mid to late January," Mr. Cuomo said.

To convince as many people as possible to get vaccinated, "we're going to need a public education campaign to battle skepticism," Governor Cuomo said. "We have 50 percent of the population saying they won't take the vaccine, that's a problem."

Unlike traditional vaccines that use a weakened or inactivated virus to elicit an immune response, the Pfizer and Moderna vaccines are messenger RNA or "mRNA" vaccines that, according to the Centers for Disease Control, contain strands of genetic code that trigger cells to create a protein unique to the Covid-19 virus, which in turn activates the immune system.

"It's new technology for the vaccine world, but not for science," said Dr. Sharon Nachman, chief of the division of pediatric infectious diseases at Stony Brook Children's Hospital.

Doctors are "hopeful" that immunity to Covid-19 will last at least a year, she said, and "the people who were enrolled in the vaccine studies will be followed for two years" to get a better sense of the vaccine's effectiveness.

For most people, the only side effects from getting the vaccine will be "the  typical ones we see with pretty much every other vaccine," said Dr. Nachman. They include pain or tenderness at the site of injection, fatigue, and possibly a fever. "All of these [should] only last for about 24 hours," she said.

Stony Brook University Hospital announced on Tuesday that it had begun "vaccinating hospital workers at the highest risk of exposure. By the end of the day Tuesday, "more than 250 personnel working in emergency rooms, critical care units, and other high-risk hospital units are scheduled to receive the vaccine," the hospital said in a release.

A spokesperson for Stony Brook Southampton Hospital, where some front-line health workers expect to receive the vaccine this week, said in an email yesterday that the hospital is "waiting to learn next steps about the vaccine distribution."

New York State continues to sharpen its focus on hospital capacity as it looks to target restrictions to those areas where hospitals are reaching critical capacity. On Long Island on Tuesday, 972 people were hospitalized with Covid-19. Of the Island's 841 intensive care unit beds, 585 were occupied on Tuesday. Looking at a seven-day average of hospital capacity, 20 percent of hospital beds were available in general on Long Island and 29 percent of I.C.U. beds were available.

Suffolk County had 14 deaths from Covid-19 on Monday, the most of any county in the state.