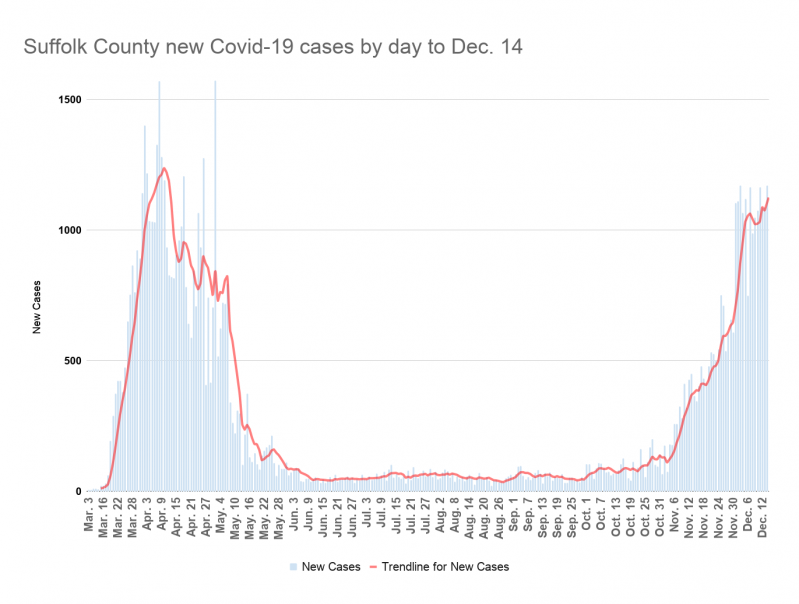 New Yorkers themselves will determine whether or not the state undergoes another shutdown of all but essential activity, Gov. Andrew M. Cuomo said on Wednesday, acknowledging a rising tide of Covid-19 infection while imploring residents to continue to practice protocols to avoid transmission of the novel coronavirus that has upended life through most of 2020.

“What will happen in three weeks?” the governor asked in remarks to the press. “What will happen in four weeks? You tell me what you're going to do over the next three weeks or four weeks and I'll tell you what's going to happen, right? We know there's been an increase over the past few weeks. But that doesn't determine what happens going forward.”

As he does in all press briefings, the governor read the latest statistics: a statewide positive rate of 6.2 percent, or just under 10,000 of almost 161,000 test results reported on Tuesday. In micro-cluster zones of high transmission, the rate was 7.1 percent; the statewide rate excluding those zones was 5.8 percent. Ninety-five New Yorkers had died of Covid-19 on the previous day. Hospitalizations due to Covid-19 had risen to 6,095, a net increase of 115.

The seven-day average positive rate in Suffolk County was 6.5 percent and the daily rate had risen to 8.2 percent. Of 12,860 tests reported in Suffolk on Tuesday, 1,056 were positive.

Amid the worsening statistics was a hopeful sign, however: the state had received 77,025 doses of the Pfizer-BioNTech Covid-19 vaccine on Tuesday, for a total of 87,750 received. An additional 80,000 are expected in the next few days, he said, all of which are part of the initial allotment of 170,000 doses. Another 346,000 vaccines, these from Moderna, will come to New York, he said, pending federal Food and Drug Administration approval. Vaccine advisers to the F.D.A. are to meet on Thursday, and an emergency use authorization is expected soon after, CNN reported on Wednesday.

The first phase of vaccinations began this week, with priority given to patient-facing health care workers and residents of nursing homes and congregate care facilities, the latter including group homes and residential treatment facilities. In the second phase, which the governor projected will begin late next month, essential workers and “priority general public,” those with underlying health conditions, will be given the vaccine.

Vaccines will be free to all New Yorkers, the governor said. A website, Vaccinate New York, can be found at ny.gov/vaccine. It is “a one stop for all information,” he said.

The governor also discussed state finances, which have been hit hard by the pandemic. He called the prospect of no federal emergency funding to state and local governments “a major disgrace,” but added that “I believe President Biden will correct the situation.” President-elect Joseph Biden will be sworn in on Jan. 20.

The state, the governor said, will advance $1.5 billion to organizations that need cash flow between now and March, by which time he expects the Biden administration will have announced federal funding. “But we understand we have to get from here to there, and we need them to function.” He did not specify the types of organizations that would see a cash advance.

Tax increases and budget cuts are inevitable, he said, citing a “$15 billion hole in the budget.” He suggested further ways to raise revenue, musing aloud about legalized recreational marijuana and sports betting. He encouraged the Legislature to hold off on determining the severity of tax increases in a new budget until federal funding has been determined. “I favor waiting until next year, because if we close the $15 billion hole this December, I can tell you the cuts to education are going to cause school districts to lay off teachers all across the board. I can tell you hospitals are going to have to lay off workers. I can tell you government is going to have to lay off workers.”