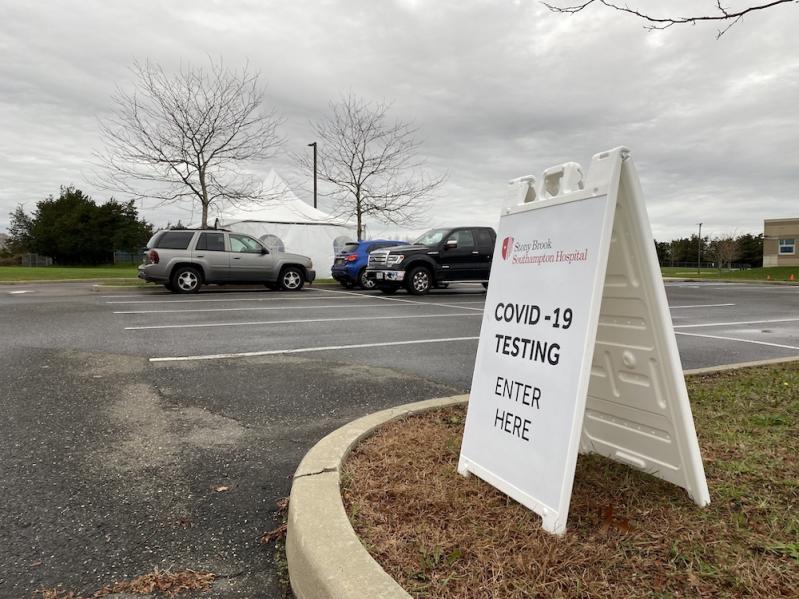 Coronavirus infections are surging in Suffolk County and people are primarily contracting the virus at small indoor gatherings, Suffolk County Executive Steve Bellone said at a press briefing on Tuesday.

Sunday was the first time the county's rate had been above 3 percent since May 25. That day, Suffolk reported more positive cases than any county outside New York City.

Based on the timing of the surge and contact tracing efforts, "We think the current spike is related to Halloween parties," Mr. Bellone said. "We are investigating one Halloween party, and we think there may be others that will emerge."

The county has cracked down on large super-spreader events that were not in compliance with a state prohibition on gatherings of more than 50 people, such as a recent sweet-16 party held at an inn on the North Shore, but now it is small gatherings that are causing the virus to spread, he said. "That's where we're seeing the surge, we're not really seeing it coming out of the schools or at stores or supermarkets. We're seeing it at these gatherings."

In "the past week in my office, for the first time in months we've had eight positive tests, which I hadn't seen since April," said Dr. George Dempsey of East Hampton Family Medicine.

Although Covid-19 cases at East End schools have been reported lately at a clip of at least one or two per day, according to administrators in most school districts, contact tracing has shown that students and teachers have not been contracting the virus in school. As of Thursday, 14 East Hampton High School students had tested positive for the virus, the most by far of any school on the South Fork. At least eight of those cases were linked to a single gathering held outside of school, and others are connected to an outdoor soccer game or students studying together, according to James Crenshaw, the school principal. Springs School announced this week that a student who had not been in school since Oct. 30 had tested positive. The school has had two cases over all. On Tuesday, East Hampton Middle School announced its first case, in a seventh grader, and the John M. Marshall Elementary School announced two new positive cases in fourth graders this week and two cases in fifth graders at the end of last week, bringing its total to eight over all.

The Sag Harbor School District closed on Monday after a staff member at the elementary school tested positive, and announced late Wednesday that two more staff members in the district tested positive. Contact tracing is under way, according to Jeff Nichols, the superintendent. At the Bridgehampton School one teacher and one student have tested positive so far. The student case required 20 individuals including 10 adults and 10 students to quarantine for two weeks. That two-week period ended on Tuesday.

The prospect of small gatherings causing the virus to spread will become an increasing concern "as we move further into the holiday season, as the weather gets colder, as we are indoors more and more, we have to take precautions to prevent these surges from continuing," Mr. Bellone said.

He noted that at a recent birthday party held indoors in Bellport, 36 of 50 people in attendance had contracted the virus. "Obviously, you had people who came to the party not knowing that they had Covid-19," and attendees had not worn face coverings or maintained social distance, he said.

To help contain the spread, the county is increasing its number of contact tracers from 50 to about 200 in order to identify and quarantine more quickly those who have been infected.

Mr. Bellone also encouraged anyone who feels ill or who may have come in contact with someone with the virus to get tested. "This is not like March or April; we have so many testing sites up and running throughout the county," he said. A list of testing sites, including those that offer free tests, are on the county's website.

The majority of recent positive cases have been among people under 65, said Suffolk County Health Commissioner Dr. Gregson Pigott, with 27 percent among those 25 to 40, and 31 percent among those 41 to 65. And the severity of cases has diminished. "Hospitals are saying they're not seeing the real, real sick Covid patients as they had in March," he said. "A lot of patients are admitted for a day or two, treated, and then discharged." The number of deaths has remained low, but as Mr. Bellone noted, fatalities can often rise in the weeks following a surge in infections. The county has reported eight fatalities from the virus between Oct. 1 and Monday.

Hospitalizations across the county have been increasing in recent weeks, from 42 patients on Nov. 1 to 71 on Monday. Although the surge of infections has been predominantly among younger and less medically vulnerable residents, family gatherings during the holiday season may pose a threat to those who are older and more vulnerable. Looking ahead to Thanksgiving, Mr. Bellone encouraged people to limit the number of people at indoor gatherings, to open windows to create as much ventilation as possible, to maintain social distancing or, when that's not possible, to wear masks. "Our kids are wearing face coverings throughout their school days right now," he said. "We can do this at gatherings."

The surge in infections is "disturbing," Mr. Bellone said, "not only because of what it potentially means for public health, but if we do not get these numbers under control then we will threaten our continued economic recovery."

According to new state measures implemented to prevent the virus from spreading, when a seven-day average of a region's positivity rate is above 2.5 percent for 10 days, more restrictions can be put in place, including a limit on gatherings to 25 people. The county’s seven-day average was 2.7 percent on Tuesday and 2.9 percent on Wednesday, according to data from the governor’s office. When the average is above 3 percent for 10 days, "high-risk nonessential businesses" such as gyms, barber shops and hair salons, and personal care services have to close, and when the average is above 4 percent for 10 days, all nonessential businesses have to close.

Mr. Bellone said that low infection rates in early fall may have lulled Suffolk County residents into a sense of complacency. "Maybe we began to think we would avoid the fate of other communities that are now being forced to roll back their reopenings," he said. "I can tell you that we can no longer say that we are beating those odds."

With Reporting by Christine Sampson and Christopher Walsh
—
Note: This article has been updated since it originally appeared in print and online.

Trees, Wreaths for Sale in Amagansett
Holiday Cheer Is Coming to Sag Harbor
Even More Thanksgiving Options From the Pike and Old Stove
END_OF_DOCUMENT_TOKEN_TO_BE_REPLACED