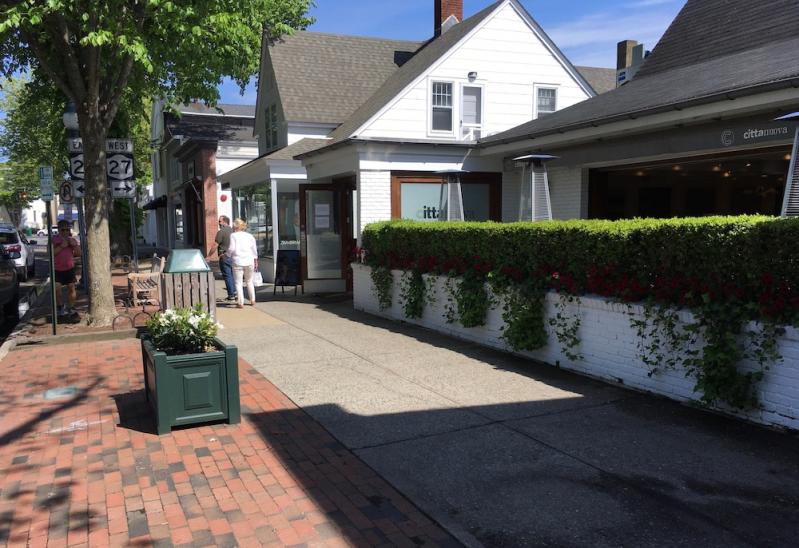 East Hampton Village plans to allow restaurants to set up tables on the brick apron between the sidewalk and the street starting next Wednesday.
Durell Godfrey
By Jamie Bufalino

East Hampton Village Mayor Richard Lawler said on Thursday that he would issue an executive order to allow restaurants and takeout food stores to set up temporary outdoor dining areas on public property starting next Wednesday.

The Sag Harbor Village Board has also proposed a law that would grant the use of public spaces for outdoor dining. At the board's meeting on Wednesday, Mayor Kathleen Mulcahy said she would also consider issuing an executive order. The East Hampton Town Board will discuss outdoor dining at its work session on Tuesday.

Restaurants have been closed for on-site dining since the economic shutdown began in March, but Gov. Andrew M. Cuomo announced on Wednesday that they can reopen for outdoor dining next week, when Long Island is expected enter the second phase of emerging from the lockdown. According to the state's guidelines, a restaurant's outdoor tables must be spaced six feet apart, staff must wear face coverings, and customers must wear them when not seated.

Mayor Richard Lawler said an executive order, rather than drafting legislation, would be an expeditious way to give restaurants a chance to recoup some of the money they've lost during the shutdown. "We're doing the best that we can as quickly as we can to make things better for our businesses and our residents," he said.

Village restaurants and food stores will be able to apply for permits through Nov. 1 to set up table and chairs on the bricked apron of village walkways, rather than the sidewalks themselves, said Rose Brown, a trustee who, along with her colleague Ray Harden, has been leading a committee on outdoor dining comprised of village officials, residents, and restaurateurs such Mark Smith, a co-owner of Rowdy Hall, and Barbara Layton, the owner of Babette's.

The cement sidewalks were not a feasible option for dining, Ms. Brown said, because they are not wide enough to be accessible for those with disabilities.

Tables and chairs will be allowed to be set up starting at 8 a.m. and must be removed by 11 p.m., said Ms. Brown. Business owners will be responsible for maintaining, cleaning, and lighting the areas, and they must have appropriate liability insurance.

The layout of the dining areas will need to comply with a state regulation that seating must be six feet from the sidewalk. Ms. Brown said that she, Mr. Harden, and Ken Collum, a code enforcement officer, have measured the bricked areas. The one in front of Citta Nuova is a bit over 9 feet wide, she said, and the one in front of Sam's is between 11 and 12 feet wide.

Ms. Brown said the initiative will provide a much-needed boost to village restaurants, and the commercial district in general. "If the restaurants are doing well and people are coming to the village I think businesses will do well," she said.