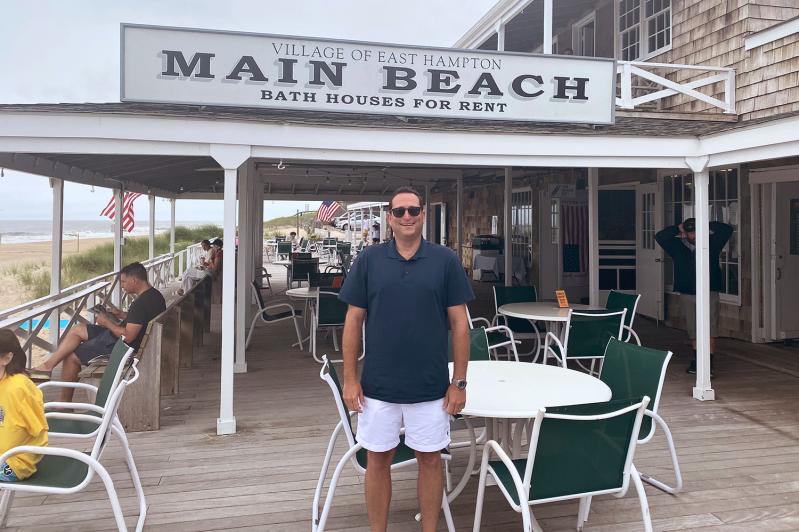 Robert Zecher, a real estate developer and the new owner of the building that is home to Mary's Marvelous in East Hampton Village, has a vision to transform that section of the village into an extension of the commercial core with more storefronts and apartments.

Mr. Zecher's company, Vault Development Partners, purchased the 9,500-square-foot mixed-use property at 105 and 107 Newtown Lane for $7.2 million in April with the hope of capitalizing on the pandemic-related increase in the East End population.

"You look at the volume of real estate transactions and most of them are not empty nesters, it is younger people buying houses for families, so by definition there's another car in the driveway, there's two more car seats in the back, and all that translates into higher commercial activity," he said. "The Hamptons are becoming less seasonal. There's a lot of lights on during the week, and when you go to restaurants, the vibe is more rooted."

A year-round resident of the village, Mr. Zecher has learned firsthand how risky it can be to operate a business here. He and his wife opened Poupette St. Barth, a women's clothing store, on Main Street in 2015 and closed it two years later. "It was a factor of rent and seasonality, but more so seasonality," he said. "Tumbleweed Tuesday was the saddest day in my business, because you weren't going to make any more money, and you see how much you lost. Seasonality is the driving point, which I think is something Covid has helped out."

He previously worked as a lawyer for a real estate development company that focused on emerging markets in countries such as Russia, Kazakhstan, and Turkey. At that job, "I learned what not to do in real estate," he said. "We were master plan developers, so there were times we were building six hotels and 2,000 homes on the coast of Turkey. Delivering that much real estate is much more complicated than it needs to be."

Vault Development Partners is more narrowly focused. "The goal for my business is to be very localized; we build in just one town. Not all the Hamptons, just East Hampton." And not all of East Hampton. For residential projects, the company focuses on 13 streets in the village and Amagansett. He didn't want to reveal all of them, but the company's website touts houses on Egypt and Dayton Lanes and Lee Avenue in the village, and Miankoma Lane and Abram's Landing Road in Amagansett.

The company also takes a streamlined approach to building that makes use of local talent. "Phil Kouffman Builder does all the construction work, and Jim McMullan of Fleetwood and McMullan is the architect," he said.

"When it comes to commercial property, my heart is focused on the village," said Mr. Zecher. "The whole thesis of Vault Development is to own assets that will provide local businesses with places to operate year round. That's what was exciting about 105 and 107 Newtown Lane. Forever, that building will provide space for one or two local businesses such as a coffee shop, or a takeout restaurant." The property also contains eight apartments, which can provide an economic boost to the village, he said. "One and two-bedroom apartments can be used by a manager of a store, or an entrepreneur who's starting a flower shop. A lot of the current tenants are professionals working in town."

Seeking to develop another building that combines commercial spaces with residential apartments, he is a "suitor" for a property behind 105 and 107 Newtown Lane that is owned by Ben Krupinski Builder and used as a storehouse and a site for light industrial work. "That use may have made sense at some point, but now it's a great opportunity for the village to expand its presence out of the core district," he said. "I'm poised to still try to get it."

Although such development would likely exacerbate parking and traffic issues, Mr. Zecher said he has faith that the village could effectively regulate the growth. "On one side of the scale is strain on infrastructure and traffic, but on the other side is something much more fundamental, it's providing housing for young entrepreneurs," he said. "Who's the next Mary's Marvelous, who's the next ice cream shop? Unless you can provide those young professionals places to live, they're not going to be here."

The main obstacle to his vision, he noted, is the village's need for a sewage treatment facility that can safely accommodate an increase in food stores and residences. Although it may take several years for such a facility to be built, Mr. Zecher is willing to wait it out. "My business is here for the long term," he said.