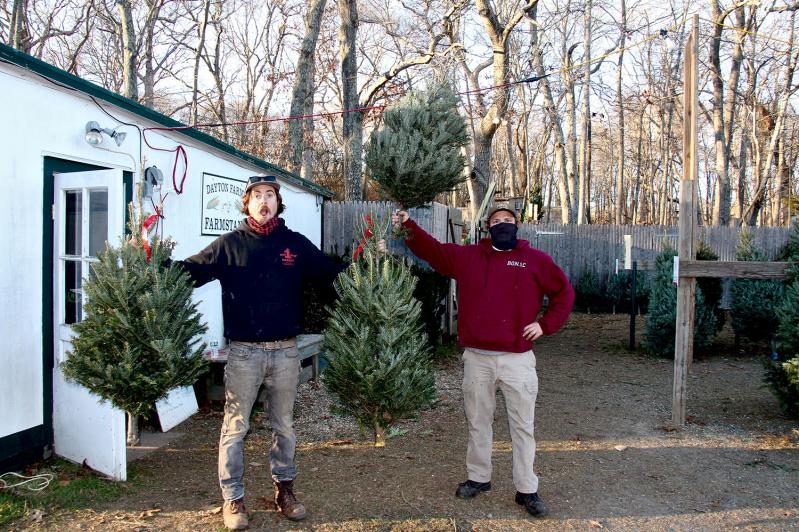 By the weekend it was already slim pickings when it came to Christmas trees at the Dayton Farm Stand in East Hampton. Aidan Arnon and Scott Abran held up a few of the small trees still available.
Durell Godfrey
By Jamie Bufalino

A mix of the holiday spirit and a desire to pierce the pandemic gloom with strings of twinkling lights has led to a record-breaking boom in Christmas tree sales, according to several South Fork vendors, and left those who waited too long scrambling to find a tree.

"We sold out in three days, and it normally takes us eight," said Jerry Schneider of the East Hampton Kiwanis Club. The group had 250 trees on hand when its weekend market at the American Legion in Amagansett opened after Thanksgiving, and by the following Sunday, everything was gone, including the scruffy specimens Mr. Schneider used to decorate the site. The club raised nearly $20,000, all of which will be donated to children in need, he said.

Mr. Schneider attributed the surge in sales to the pandemic-related increase in the East End's population. "There's obviously 100 percent more people out here than ever," he said.

"This is the busiest year we've ever had," said Brian McGintee, who oversees Christmas tree sales at the Dayton Farm Stand on Route 114 in East Hampton. Traditionally, the stand begins selling trees on Dec. 1, he said, but this year, after receiving an initial order of 800 trees prior to Thanksgiving, they started early. "We sold almost 200 before Dec. 1," he said. At first, sales were driven by pandemic fatigue. "Everyone buying them early was because people needed a change, but the reason we're running out is because the population has quadrupled." After starting to run low, he ordered an additional 120 trees, and, as of Saturday, a little more than 100 remained. "Last Sunday, we broke our record, we sold 180 trees," he said. "Saturday was raining, so everyone came Sunday and wiped us out. It was crazy that day."

The only trees left earlier this week were smallish, and one downside to the increased demand, he said, has been disappointing those customers seeking a more formidable fir. "I do feel bad for the people I remember from years past who always come around this time to buy a giant tree, but by now I think people have heard there is a shortage," he said.

Indeed, South Forkers desperate to locate that special specimen took to social media in droves last weekend to crowd-source their options. Those from East Hampton were pointed toward Sag Harbor, Shelter Island, and the North Fork.

The Christmas tree racks at Buckley's Garden Center in East Hampton are bare. "This is the first time I have sold out this early," said Robert Limonius, one of the owners, on Saturday. The shop had ordered 350 trees and began selling them right after Thanksgiving. By last week, they were all gone for "the first time in many, many years," he said. "Last year, I was stuck with about 50 trees because everybody had left home on vacation."

Although the pandemic boosted tree sales, it prevented the store from providing its usual service of helping customers set up the trees inside their homes. "People out here get larger trees and it can take two, three, four people to set them up," Mr. Limonius said. "We don't do that anymore," and that may have consequences. "We saved a lot of marriages by setting them up," he said.