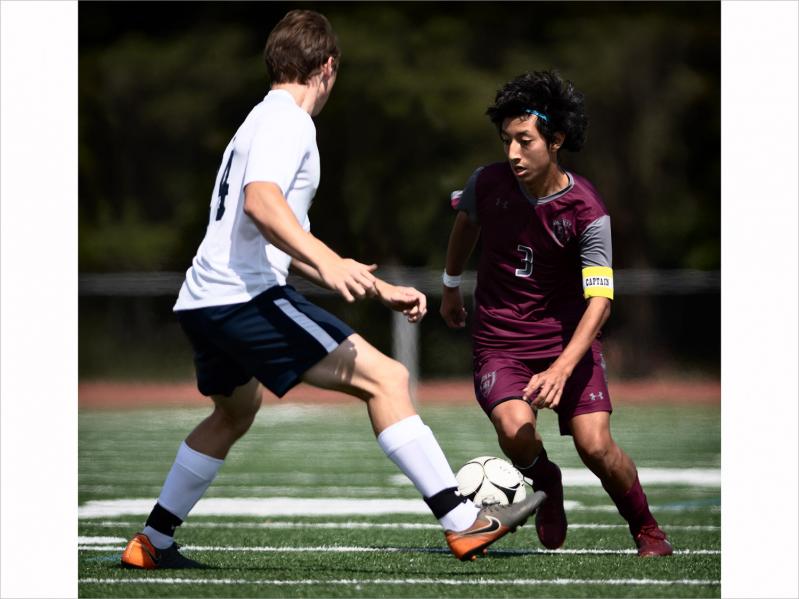 Brian Tacuri (3), a junior midfielder, is one of the East Hampton High School boys soccer team’s captains, along with Eric Armijos and Michael Figueroa. The Bonackers, who attack relentlessly, took a 4-1 record into Monday’s game here with Hampton Bays.
Craig Macnaughton
By Jack Graves

The East Hampton High School boys soccer team looked very sharp in its League IV opener versus Shoreham-Wading River here on Sept. 13 and in its homecoming game with Stony Brook on Saturday, despite a considerable number of graduation losses, and boys volleyball and boys cross-country each won their homecoming matchups last week.

As for soccer, East Hampton’s forwards, Eric Armijos, Michael Figueroa, Gary Gutama, and John Bustamente among them, are relentless attackers, moving down the field with crisp short passes. In contrast, Shoreham and Stony Brook’s players often took to the air and were always threats on set plays such as free kicks, throw-ins within East Hampton’s end of the field, and corner kicks.

In the early going of the Shoreham game, it seemed that Armijos, who had broken through several defenders to go one-on-one with the keeper, had scored, but he had been ruled offside.

No matter, for in the 16th minute, Jeremy Ortiz, from out of a crowd, put a ground-hugger into the far right corner of Shoreham’s nets, and in the 27th, Bustamente, from in close, made it 2-0.

During the halftime break, Don McGovern, East Hampton’s coach, warned his players, whose ball-handling skills frequently baffled Shoreham’s players, not to let up. “Don’t let them get back in the game,” he said as they huddled up before the second 40-minute half began.

Clearly, McGovern’s players listened, for within the first minutes of the second half Figueroa blasted a shot that sailed just over the crossbar, and a few moments later, a strong bid by Adrian Arango that a defender deflected zipped wide of the far post.

Shoreham came very close to scoring in the 46th minute when a header from close range clanged down off the crossbar. Armijos, in the 52nd minute, found himself facing an open goal from about 12 yards out, but Shoreham’s goalie, who had just made a good save on another shot, recovered in time to gather in the lofted ball.

With his superior ball-handling skills, Armijos gave Shoreham fits that day, weaving his way in on goal repeatedly. One such foray, from the left sideline in the 56th minute, resulted in East Hampton’s third goal of the afternoon when Figueroa buried the rebound of a shot he had taken after receiving a pass from Armijos across the goal mouth.

With the Bonackers up a comfortable 3-0, and with 24 minutes left to play, McGovern went to his bench, sending in Sebastian Avila, Christopher Chimbo, and Jose Calderon in the first wave. Calderon was to score 2 goals in East Hampton’s 3-1 homecoming win over Stony Brook.

Figueroa scored the first, from out of a crowd, with 56 seconds left in the first half, thus sending the teams into the halftime break tied at 1-1, a stunning header by the visitors following a throw-in having broken the ice in the 11th minute.

The halftime score could well have been 2-1 East Hampton, though about midway through, a soft shot by Armijos bound for the left corner of a temporarily open goal was kicked away at the last second by a Stony Brook defender, Daniel Kim.

The Bonackers were not to be denied, however; the second half belonged to them. Calderon made it 2-1 in the 42nd minute, his 20-yarder following a corner kick landing in the left corner of the visitors’ nets. And, in similar fashion, he made it 3-1 seven minutes later following a free kick taken by Gary Gutama.

East Hampton kept firing away in the remaining minutes, during which Armijos, Gutama, Figueroa, and Christopher Chimbo got off credible shots, but Stony Brook’s goalie parried their bids.

Going into the week, McGovern’s team was 4-1, having won four straight after having dropped the season-opener 4-2 to William Floyd.

(About half of Barry’s 2002 boys cross-country team that was inducted Saturday morning into East Hampton High’s Hall of Fame made it to the ceremony, Brian Ahearn, Kevin Ahearn, Matt Rubenstein, Joe Sullivan, Casey MacNiven, Chris Reich, Bobby Reich, and John Simmons among them. They, and their 16 children, gathered later at the Clubhouse in Wainscott.)

The volleyball team won last Thursday by scores of 25-9, 25-20, and 25-9. Hunter Eberhart served four straight aces in the first set that extended Bonac’s lead to 20-7. In the second, during a furious rally, Calum Anderson, the third Bonacker to touch the ball, kicked it over the net for a winner, and, in the third, players off the bench, including Nick Cordone, who had a kill, and C.J. Baumrind, made significant contributions.