One part of a machine going into the unknown 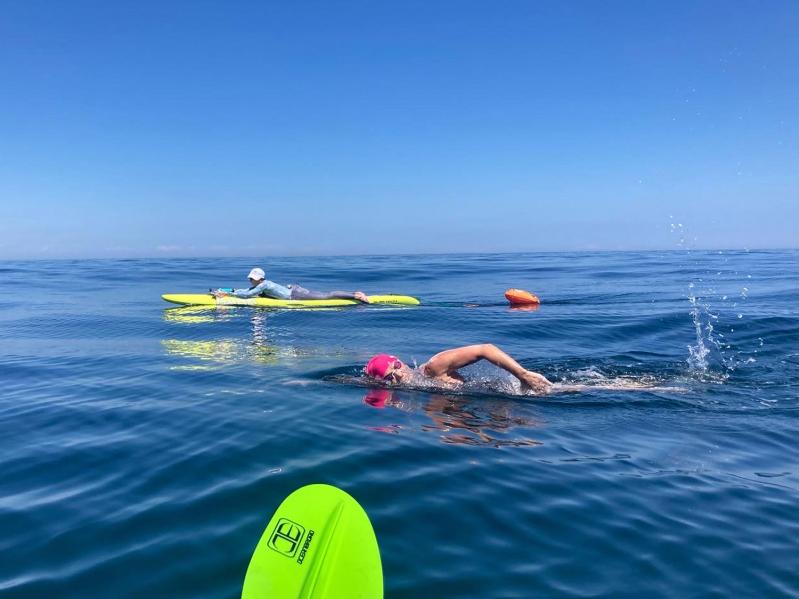 Flanked by Sinead FitzGibbon on a prone board and Amanda Fenner and her daughter, Sierra Joan Davidson, in a two-person kayak, Lori King made history last Thursday in swimming from Block Island to Montauk.
Amanda Fenner Photos
By Jack Graves

“The only certainty when it comes to open-water swimming,” Lori King said, “is that there are no certainties.”

No matter how well-planned, things can happen in long distance swims — and things did happen last Thursday as the 47-year-old Amagansett woman, accompanied by a 14-member crew, swam a 23.9-mile U-shaped arc in the Atlantic Ocean between Block Island and Montauk, clearing the high water mark on a rocky beach at the foot of Camp Hero at 3:29.20 p.m.

Her time of 8 hours, 39 minutes, and 45 seconds, which the Marathon Swimmers Federation is expected to certify, is most notable for the fact that apparently no swimmer has ever before spanned Montauk and Block Island, a challenge that Sinead FitzGibbon, one of those in King’s crew, has called “the local Everest of swimming.”

During the crossing, carefully planned by Amanda Fenner so as to use the tides to advantage, King experienced cramping so great that for a half-hour or so she could not kick with her right leg, there were repeated upwellings of cold Continental Shelf water, she was vaulted by a school of mackerel, heard dolphins speak, and swam within range of a whale and several sharks, one of which, she said, was a great white shark.

“But at no time, because of the crew’s expertise, did I feel endangered. My job was to swim, their job was to navigate, to record, and to look out for sea life. Everybody was spot on. . . . There’s so much that goes into the planning before these swims. It’s not just showing up, it’s about personalities and how they work together. I was one part of this machine that was going into unknown territory.”

Besides herself, Fenner, and FitzGibbon, King’s crew comprised Capt. Mike Martinsen and the Montauk Pearl, Captain Mark Fischer and the Stella III, Janine Sterell, the M.S.F.’s official observer, Marcie Honerkamp, also an observer, Dr. Rondi Davies, who helped with digital tide and route planning, Richard Fenner, a certified weather observer, the Fenners’ daughter, Sierra Joan Davidson, already a marathon open-water swimmer and I-Tri coach at 18, Tim Treadwell, a mentor to open-water swimmers here, Dan Farnham, who has for years led Paddlers for Humanity’s annual Montauk-Block Island crossings, the most recent being July 23, Arek Zenel-Walasek and Andrew Malinak, who assisted with the route planning, and Drew Maloney, a filmmaker and photographer based in Montauk.

King’s impressive open water swimming resumé also includes a Catalina Channel crossing in 2014, an around-Bermuda swim in 2016, the 8 Bridges race in the Hudson River, marathon swims in Greece, Spain, and Italy, a swim around Key West, Fla. — in 2012, when she first met Fenner, who accompanied her in a kayak — and, on June 3, a 30.5-mile crossing of the Ka’iwi Channel in Hawaii.

The Ka’iwi crossing “was a very challenging swim,” she said. “I battled for 14 and a half hours. It started at night, there were 15-to-18-knot winds, there was active sea life. Fewer than 86 people had ever completed it since 1969, so I knew I was physically ready for this one.”

She and Fenner had been talking of taking on the Montauk-Block Island challenge periodically over the years — Fenner has been thinking about it since 2008 — but came to talk about a crossing in earnest in January.

"Amanda did everything when it came to the coordination of it . . . while Rondi Davies, did all the tides and current modeling for the swim exploring different directions, different times, when to leave and, actually, leaving from Montauk looked like the better way, but we concluded that swimming from Block to Montauk would be like swimming home. It had meaning for me to do it that way." King said.  Davies has over 10 years of experience working with tides and currents around New York waters and even assisted with navigation via phone the day of the swim.

King, a former LaSalle University breaststroker, was the Old Montauk Athletic Club’s 2014 athlete of the year, largely in recognition of her under-nine-hour Catalina Channel feat — eight hours of which were swum in the dark. She has described the experience of open-water swimming, which she began in 2004, as “spiritual,” and said, “there’s something beautiful about it . . . it makes me stronger in every way.”

“What I love about open water,” she said at The Star on Saturday morning, “is there’s always something new — every swim is different. . . . It’s constantly changing.”

Leading up to the Block Island-Montauk crossing, she had worried chiefly about the water temperature. “I had been in cold water swims, in 63-degree water for eight to nine hours, without a wetsuit. Catalina was like that, Ibiza was like that. But with cold water you never know how your body is going to react. I don’t do well in cold water, I have to get my mind in a place where I know that while I’m uncomfortable I’m okay. I was really concerned about that, but Amanda was confident I could do it. . . . The water temperature fluctuated on the swim. We went six miles out into the ocean, and there were surges of cold water, upwellings in the 63-to-66 range. I thought they would stop, but they didn’t. So, for about three hours, I was pretty uncomfortable, but I had to mentally tell myself that I was comfortable with being uncomfortable. When I started to cramp, in my hips mainly, Amanda, who was in a kayak with her daughter, Sierra, and was feeding me carbs and electrolytes every half-hour, sent out mustard packets and pickle juice that Janine had brought along to relieve cramps.”

Fenner has described as “a machine.” Her stroke rate was pretty steady throughout the agon, varying from 72 to 76 strokes per minute. King and Fenner would talk every now and then. “Your observers want to know how you feel, they want to know if you’re slurring your speech, if you’re peeing . . .  if your fluids are going out. If not, things can get very bad very fast. You can go from being fine to going under.”

The rules in such swims, King said, limit the swimmer to a swimsuit, cap, and goggles. “No wetsuit, no device that helps with buoyancy, no device that retains heat. You can’t be touched, nor can you touch a boat, or hang on, or anything like that. . . .”

“I wasn’t going to give up,” King said. “When you see everyone who has worked so hard so you can get there, you just can’t.”