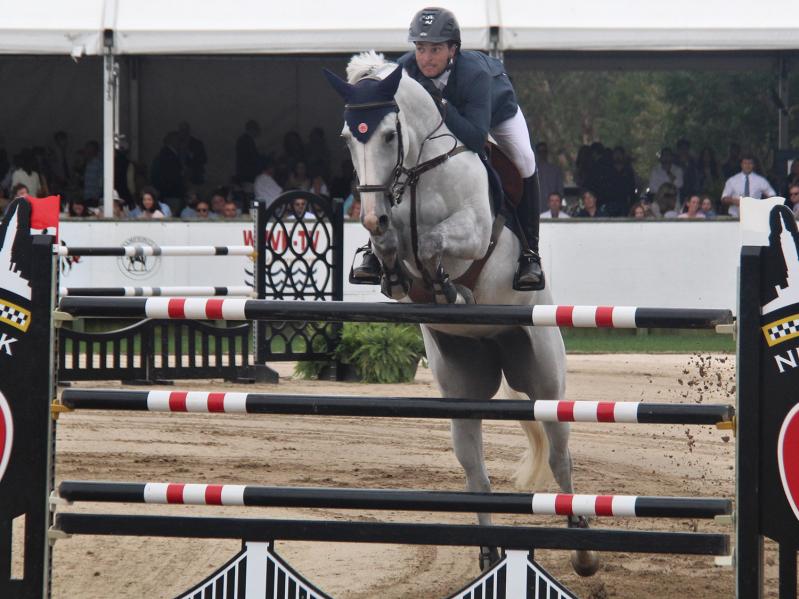 Daniel Bluman of Israel, with Gemma W, won last year’s Hampton Classic Grand Prix, besting McLain Ward and Contagious in a jump-off by two seconds. Both riders are expected to compete again at this year’s Classic, now a five-star-rated show, which is to begin Aug. 28.
Durell Godfrey
By Jack Graves

The 2022 Hampton Classic Horse Show will be more aristocratic, as it were, and more democratic given the fact that the International Federation for Equestrian Sports (F.E.I.) recently approved its application for five-star and two-star divisions.

It was a big deal, Shanette Barth Cohen, the show’s executive director, said Friday at the Classic’s show grounds in Bridgehampton. “Five-star shows attract the top riders and the top horses. It’s the highest level of show jumping competition except for the championships, such as the Olympics and the World Cup. . . . In a five-star show the riders can get more Longines worldwide ranking points.”

Marty Bauman, the show’s communications director, said the Classic now is one of eight five-star shows in the United States. The others are in Wellington and Miami Beach, Fla., Saugerties and Governors Island, N.Y., Traverse City, Mich., Upper Marlboro, Md., and Thermal, Calif. Barth Cohen added that the International Horse Show is also moving up to the highest rating.

Prize money was the main determinant in getting the F.E.I.’s nod, she said. This year’s Classic, scheduled to open Sunday, Aug. 28, is to offer more than $1 million in prize money all told, “for all the classes except equitation.” The Grand Prix purse will be $410,000, the most ever for that class, the climactic one of the week, with $135,300 going to the winner.

Asked if this year’s entries had swelled, Barth Cohen said she wouldn’t know until later in the week, though “we expect they’ll be at least as large as last year, which is to say we’ll have 1,300 to 1,500 horses and somewhat fewer riders.”

The two-star classes “will enable younger riders or riders with younger, developing horses to compete at the Classic. Maybe we’ll get to see the next Sapphire at the Classic,” she said of one of McLain Ward’s best horses.

The two-acre Grand Prix ring has also been entirely resurfaced. That ring had been recovered in turf in 2018, but it was evident on opening day of last year that the grass roots weren’t holding, and that, consequently, the footing had become treacherous. The show’s management promptly skinned all but the ring’s outer reaches and replaced the grass with sand.

Further work was undertaken in the months following the 2021 show, and now, said Barth Cohen, “it’s been completely redone with state-of-the-art all-weather footing, a combination of sand and fiber, exactly what you’d find at the International Arena in Wellington, the Tryon Stadium in North Carolina, and at the 2023 World Cup finals in Omaha.”

“The riders will be happy,” she continued. “We’re maintaining it to optimize the performance of their horses. From a safety standpoint it’s going to give us the best sport possible. . . . We tried to make the grass as good as we could, but it didn’t hold up.”

She knew for certain that the reigning Grand Prix champion, Daniel Bluman, an Israeli who also won the Grand Prix in 2017, and McLain Ward, a seven-time Grand Prix winner here and last year’s runner-up, were returning. “And Georgina Bloomberg too.”

The 16 stable tents are to go up at the beginning of next month, and though she hopes, as usual, that there will be nothing untoward weather-wise in August, it was nice knowing, Barth Cohen agreed, that the staff, as has been the case in the past, including last year in the face of Tropical Storm Henri, was capable of striking the tents and putting them back up in short order.

Mashashimuet Park's History and Future
A Conference for Young People to Create Solutions
Get Outside, Get Moving
END_OF_DOCUMENT_TOKEN_TO_BE_REPLACED