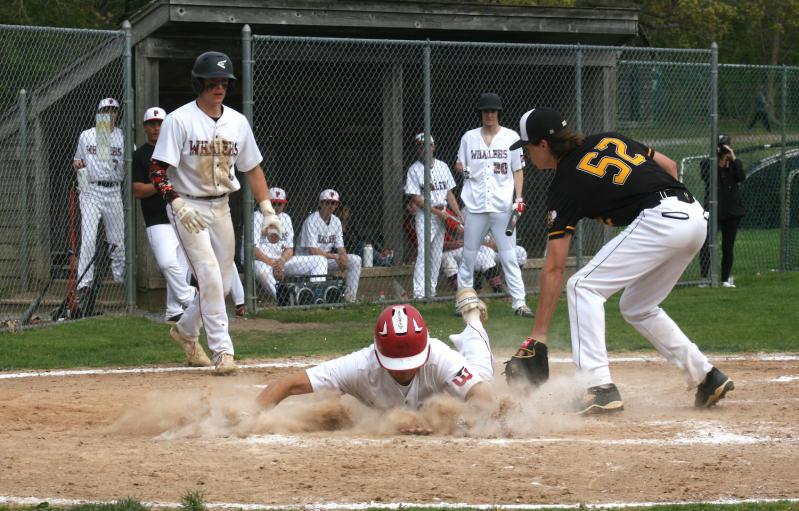 Pierson High School's baseball team, playing before a large and appreciative hometown crowd at Sag Harbor's Mashashimuet Park Friday, swatted Bridgehampton's Killer Bees 13-2 to finish the regular season at 13-5. The Bees gave the Whalers a better go in the first two games of the series, losing by scores of 4-2 and 5-3, but finished Friday at 6-12.

The Whalers are the third seed in the county's double-elimination Class C bracket, behind 16-2 Port Jefferson and 15-3 Southold. They will play at Southold Wednesday with the winner playing at Port Jeff Thursday at 4 p.m. The two losing teams are to play at the higher seed tomorrow, and a best-of-three final series is to be contested Monday, Tuesday, and next Thursday, if needed.

East Hampton's 10-8 baseball team, which made the playoffs early on, and boasted a 10-2 record before being successively swept by Sayville and Mount Sinai, has been seeded sixth in the county's Class A double-elimination bracket, and will play at Mount Sinai Tuesday. If East Hampton wins, it will play the Sayville-Shoreham winner Wednesday. If it loses, it is to play the Bayport-Miller Place winner Thursday.

"We didn't play well -- it's pretty much all a blur," Vinny Alversa, East Hampton's coach, said when asked over the weekend for details of his team's season-ending series with Mount Sinai, which bested East Hampton 8-4, 8-0, and 12-1. The good news, he said, was that Colin Ruddy, his ace, had finished with a regular-season record of 5-2 and a 1.25 earned-run average. Alversa was still not sure as of Monday whether he'd start Ruddy or Jack Dickinson, who has been rehabbing a strained oblique muscle, in the first playoff game. When it came to Dickinson's possible return, "Keep your fingers crossed," he said.

Class A games are also to be played at the higher seeds Friday, Saturday, next Monday, and, if needed, next Tuesday.

In other baseball news, the Hamptons Adult Hardball (HAH) League got its second season underway with a doubleheader at Southampton High School Sunday. The defending-champion Harbor Krakens defeated the Southampton Brewers 5-2 in the first game, and the Sag Harbor Royals lopsidedly defeated the East End Ospreys, a new team, in the second.

"We'll play at a mix of fields, in Southampton, Sag Harbor, and Bridgehampton, through July," Pete Barylski, the league's co-founder, said Monday. When asked if the rosters were filled, he said, "I know the Ospreys are looking for pitchers." The league's website is hamptonsadulthardball.com.