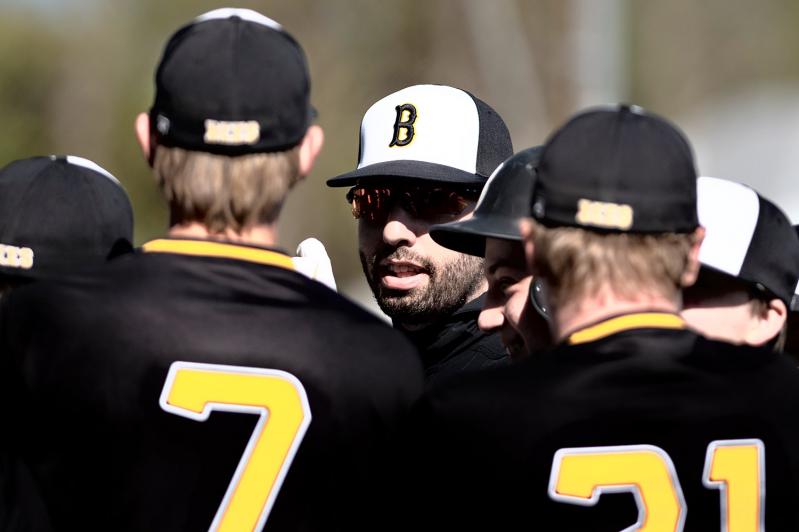 Lou Liberatore, facing the camera, and his Killer Bees varsity baseball team, the first such Bridgehampton has fielded since 1979, began spring practice on the school’s new field Monday.
Craig Macnaughton
By Jack Graves

Lou Liberatore, who since his arrival at Bridgehampton High School five years ago has wanted to revive baseball as a sport there, was to have taken the field -- a brand-new grass one -- with his 17-player Bridgehampton-Ross School squad Monday, the first day of spring practice.

The team, virtually the same one that posted a 14-1 record in junior varsity competition last spring, is to play in a league with Pierson, Hampton Bays, Port Jefferson, Southold, Greenport, and Shelter Island, which has also been rebuilding its program.

Shelter Island and the Killer Bees are to play on Bridgehampton’s league-opening day, April 5. Before the game, Liberatore said, the Suffolk Sports Hall of Fame is to put down a historical marker along one of the baselines honoring the Major League Hall of Famer Carl Yastrzemski, a native of Bridgehampton who was a high school standout not only in baseball, but also in basketball and six-man football.

The teams he played on, along with Billy DePetris and Bill Stavropoulos, fellow Bridgehampton High School Hall of Famers, were dominant in Suffolk County in the mid-1950s. The record of the baseball team, coached by Merle Wiggin, also a Bridgehampton Hall of Famer, was 29-1-1 spanning 1955 and ’57, a year in which the senior class was said to have numbered 18.

Asked if Yastrzemski would be there on April 5, Liberatore, who pitched when he was a student at Molloy College and who coached Bayport-Blue Point’s team for five years before coming to teach fifth grade at Bridgehampton in 2017, said, “We’re trying to get him to come.”

Mark McKee, the Springs School’s former athletic director, coached the last Bridgehampton team to play out a full season, in 1979. When interviewed for an article on Liberatore’s efforts that appeared in The Star’s Feb. 27, 2020, issue, he said, “I love it that they’re reviving it.” When told this writer couldn’t remember the team’s record in 1979, McKee thanked him, adding that “Carl Johnson and Wayne Hopson were very, very good ballplayers -- our problem was numbers.”

There is, of course, a big jump from junior varsity to varsity competition, but Liberatore, who has been supported along the way by the school’s athletic director, Mike DeRosa, said his goal “is to get a little better every day.”

“We’ll have good pitching,” and Milo Tompkins, a Ross sophomore who is the team’s catcher, “will be one of the best players in the league -- he’ll be the general on the field.” Tompkins and the Vinski twins, Scott and Kris, junior left-handed pitchers, are the captains. Eli Wolf, a Ross junior right-hander, will also pitch.

Liberatore has overseen open gyms twice a week for his charges throughout the winter, “working around the basketball team’s practices.”

The new ball field behind the school will be fenced, said Liberatore. The distances, he said, would be 305 feet down the left and right-field lines, 350 in the gaps, and between 360 to 370 in center. The Hamptons Collegiate Baseball League, a wood-bat league for top college players, is to use it in the summer.

Mashashimuet Park's History and Future
A Conference for Young People to Create Solutions
Get Outside, Get Moving
END_OF_DOCUMENT_TOKEN_TO_BE_REPLACED