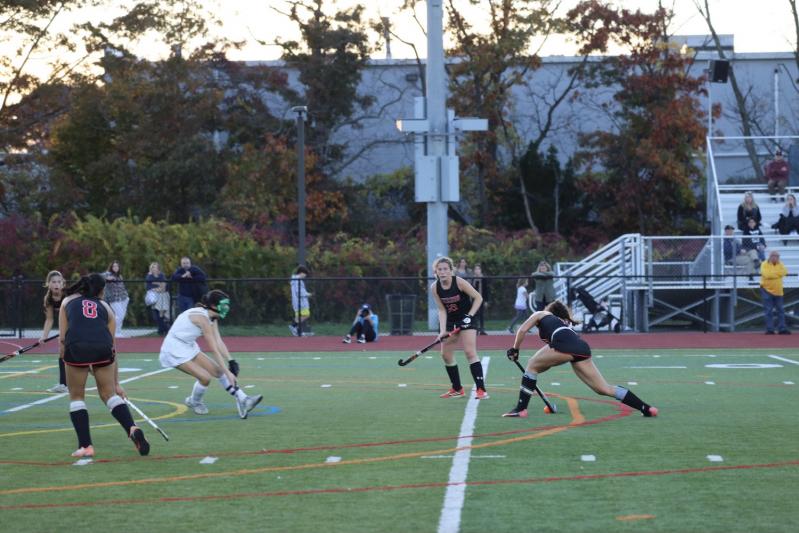 The goal Pierson’s Meredith Spolarich scored on this shot was annulled by the referee, who said it was "shot from outside the circle." The photograph seems to tell a different story.
Kate Tardif
By Christopher Gangemi

Standing at the edge of the field after the Pierson Whalers just lost the Class C Long Island field hockey championship, 2-1, to the Carle Place Frogs Wednesday, Brian Tardif, Sag Harbor’s athletic director, was shaking his head, saying, “That’s a tough call to make at that part of the game.”

He was referring to a goal scored by Meredith Spolarich, a senior, which had been annulled by the referee, Maureen Allmendinger, with just over a minute to go in the game.

After playing in its end nearly the entire second half and going down 2-1 at 11:23 of the third quarter, Pierson had managed to push down into the Frogs’ zone with just minutes to play and was awarded a corner.

Maddie Cohen, one of six starting seniors for the Whalers, made a solid pass to Spolarich, who smartly shot the ball into a defender’s foot, drawing Pierson’s ninth corner play with only 1:35 remaining in the game. Miachesca Gangemi, a senior, then inserted the ball into play to Spolarich, who shot hard from the top of the circle. Gangemi swatted at the deflection, and the ball ricocheted back off the Frogs’ goaltender to Tahnie Sullivan, another senior, who drove the ball into a defender’s foot.

Thus, with less than a minute to go, Pierson had its 10th corner and its last chance to tie the game.

Gangemi and Spolarich have started on the Pierson varsity team since eighth grade. Co-captains, they were the only two players to touch the ball on the final corner play of their high school field hockey careers. “That was such a symbolic play,” said Kim Spolarich, head coach of the Whalers. “They were captains on and off the field, played with their hearts, led by example, and always had unbelievable control of the game.”

Gangemi inserted the ball to Spolarich who handled the hard pass cleanly, quickly set her shot, and unleashed a bullet before the Carle Place defender was within four feet. Her shot skipped low along the turf and hit the back of the goal with a loud thud.

The Whalers were jubilant, but their jubilation quickly turned to confusion and shock when, seconds later, Allmendinger, who had taken up a position at the endline, waved off the goal.

“The ball came out of the circle but never went back in,” Allmendinger said after the game. “She shot from outside the circle.” No conference was held with the other two referees on the call.

A minute later, the game was over, leaving the Pierson team dumbfounded, angry, and emotional.

Neither co-captain was interested in speaking about the controversy. But both were reflective about their years spent as Whalers. “Field hockey has been my favorite part of high school. It has given me my fondest memories and best friends. My heart belongs to this sport and my teammates who have been with me through all these years,” said Spolarich.

Speaking of the six departing seniors, Gangemi said, “The six of us are sad to be moving on but know that Pierson field hockey isn’t defeated. We leave behind an incredibly talented group of players.”

Early on, the talk in the stands was of the weather, not the officiating. The gametime temperature was 73 degrees, with pure sun and a light wind.

At the 9:30 mark, Elena Merola, a senior, drew a whistle just outside the Carle Place circle. Spolarich, with a quick start, drove into the penalty circle before getting off a low shot through traffic that possibly deflected off a Frog before beating the goaltender and hitting the back of the goal. The Whalers were up 1-0.

For the rest of the first quarter, a stalemate ensued. Sullivan stood out for the Whalers. “Her speed and ability to carry the ball down the wing was an important aspect of our success all season,” Coach Spolarich said.

For the Frogs, Olivia Docyk, a senior midfielder, led play. It was an end-to-end, hard-fought, disciplined, and exciting game.

Despite her early goal, Carle Place seemed afterward to neutralize Spolarich, keeping the ball from the center of the field. When she did handle the ball, she was crowded by Frogs. Carle Place tied the game at the 11:25 mark of the second quarter when a penalty circle scramble led to a goal by Mia Babino, a senior.

The momentum had shifted. With five minutes to go in the first half, play was largely in the Whalers’ half of the field. It remained so for the entire second half. A shot from outside the penalty circle deflected by Pierson’s goalie, Cali Wilson, a sophomore who had seven saves in the game, led to a corner for Carle Place. The Frogs converted with a goal by Marisa Terrone, a senior, to take a 2-1 lead at the 10:05 mark of the third quarter.

The Whalers’ defensive corps was taxed, with Eva McKelvey and Lily Perello, both juniors, kept busy. Wilson came up with a couple of key saves to keep it close, but the Whalers couldn’t generate offense until the final ill-fated minutes.

Coach Spolarich and her assistant, Heidi Wilson, immediately protested the game. Photo evidence showed that the younger Spolarich had indeed scored her second goal of the contest from inside the circle.

It would be too simplistic to say that the botched call cost the Whalers the game. However, it likely would have been decided during a 7-on-7 overtime period.

“We can’t blame it all on the officials,” said Coach Spolarich. “If we had scored earlier, we wouldn’t have been in that position.”