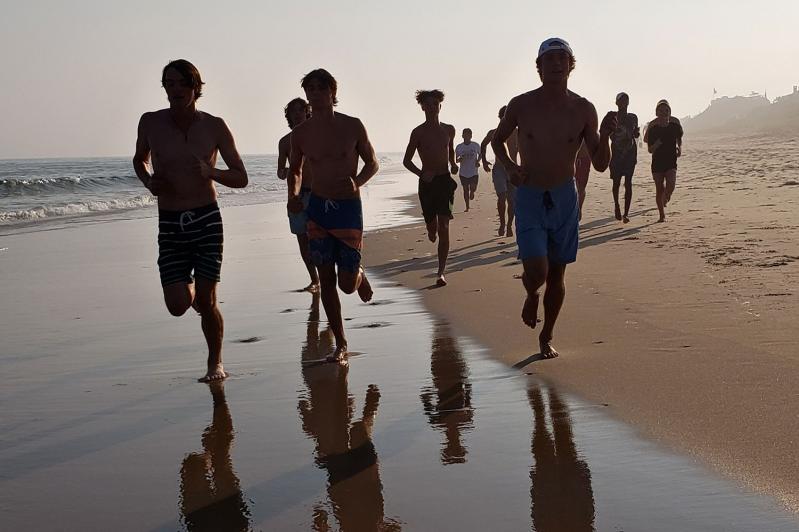 Practice for East Hampton High's 11 fall teams began 10 days ago, and the prospects for most of them are, if the past is prologue, good.

The golf team is virtually the same one that won the league in the March-April season and finished third in the county tournament, not to mention the fact that its number-one, James Bradley, a freshman at the time, won the county individual championship, making him the third Bonacker to do so since 2010.

Boys soccer lost 19 to graduation from the team that was a county Class A finalist in the spring, but even so, Don McGovern, the coach, expects to field a competitive squad, whose core includes Eric Armijos, a junior who can score, and Robert Rea and Manuel Ruiz, both energetic seniors. He'll be looking to them to set the tone.

The team is to play its first game, a nonleaguer against Westhampton Beach, on the turf field here today at 5 p.m.

The goalie position was a question mark as of earlier this week, given that Neyser Dutan, last year's backup, has a cut above one of his eyes. "I'm not sure he'll be ready," McGovern said during a telephone conversation Saturday.

The numbers, for varsity and junior varsity, were good, the coach added, "20 on the varsity, 20 on the jayvee. . . . I think we'll still be strong, though we'll have some growing pains. We'll have a good mix of sophomores, juniors, and seniors. We're expecting the kids who were on the jayvee last season to step right in."

The numbers are good when it comes to girls soccer too -- 45, according to Cara Nelson, the coach, divided up between the varsity and junior varsity. Claire McGovern, Coach McGovern's daughter, who is a junior, looked in practice the other day as if she will be a force to contend with.

The boys and girls cross-country teams, coached by Kevin Barry and Diane O'Donnell, are also expected to be strong.

Barry said Saturday that Evan Masi, who missed the past season owing to an ankle injury and slight ligament tear, is back, and that Brayan Rivera, Mikey Gilbert, Amari Gordon, Liam Fowkes, Colin Schaefer, and Aidan Karman are back too from the squad that finished third in the division meet and fourth in the county meet in April.

"Our numbers are way up -- from 14 to 24," said Barry, who added that "we're back to the way it used to be, with invitationals and with a state meet. We'll have three meets at home, at the 2.5-mile course at the high school, and the boys and girls are going to invitational meets in Rhode Island, at Bear Mountain, and at Sunken Meadow and Van Cortlandt in the Bronx."

The girls' numbers were up also, Barry was happy to report. O'Donnell had only five on her team last season, though they were good enough to top the division's B teams -- winning by one point over Bayport-Blue Point -- and to finish third among the Bs in the county meet. That team, which had won the county Class B title in 2019, comprised Ava Engstrom, Bella Tarbet, Dylan Cashin, Emma Hren, and Ryleigh O'Donnell. Engstrom and Tarbet have since graduated; the rest are back.

As it was, East Hampton would have been the undefeated league champion in April had it not had to forfeit wins over Mount Sinai and Amityville because, with Engstrom in quarantine, it only had four runners on the line.

With only two seniors, it will be "a good development year," though McConville is looking forward to it. His team received a preseason ranking of two, behind Westhampton Beach, among the 19 power-rated east division teams in Suffolk. The schedule, he said, will be tough, which is what he wanted. Teams with a .500-plus record will make the playoffs. There are 18 teams in the county's west division.

The high school's courts were to have been redone over the summer, but were not, though the work apparently is to begin soon. "We'll play our first match," which is to be today at 4 with Bellport, "at the high school, and the rest of our home matches will be played at East Hampton Indoor Tennis. We've been practicing there, indoors, weekday afternoons."

His boys team, which is to play in the spring, "will be fantastic," added McConville, who has been overseeing Monday-through-Thursday clinics for as many as 12 of them at Hampton Racquet this summer.