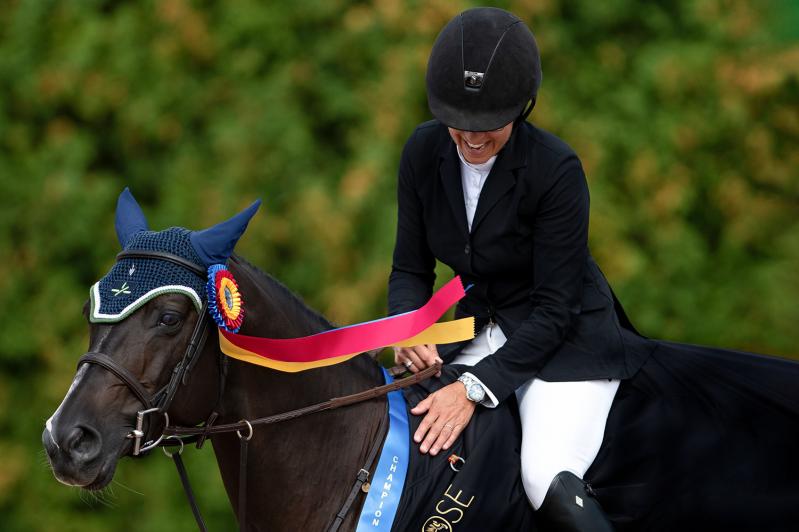 Dana Mazzola Trotter, who moved with her stepfather and mother to Amagansett at the age of 8, grew up working with and riding ponies and horses, first at Stony Hill Stables in Amagansett, and then at Harry de Leyer's East End Stables in East Hampton.

"Harry was great," she said with a smile during an interview last Thursday in Firefly Farm's tack room, as her 14-year-old black Oldenburg gelding, Balou's Boy, was being readied for an outing. "He was a mix between strict and extremely knowledgeable, and he taught us all so much."

Trotter, who usually exercises Balou's Boy five to six days a week, had given him three days off after the Hampton Classic, a reward for having helped her to a first-ever adult jumper division championship there. She and Balou's Boy finished ninth, second, and, in Grand Prix Sunday's $5,000 Adult Jumper Classic, first -- a rarity for a local rider in a show that attracts top-flight competitors, two-legged and four-legged, from far and wide.

It had been Heidi Earle, Firefly Farm's owner, who introduced her to Balou five years ago.

"Heidi had got him for another rider, but he was small and she was tall, so Heidi told me, 'You're going to ride this horse.' I leased him that summer, the summer of 2016, and when the lease ended in September, my mom [Pat MacArthur] said, 'We have to have to buy him.' "

"It's been incredible having him. We're a good team. I trust him and he trusts me. We've formed a great bond."

From Stony Hill and East End Stables, Trotter and her childhood friend, Shana Menu Altschuler, each of whom began working off their lessons from early ages, moved over to Carwytham Farm at Two Trees Stables in Bridgehampton, what is now Firefly Farm, when Trotter was 14 or 15. "My mom would drive us over at 8 a.m. and pick us up at 5, after we had ridden and groomed horses all day."

She had always loved horses, she said. "It's always been my passion."

Her passion for horses is, to a large extent, shared with two of her children, Reese, 13, and Zoey, 8. "Am I their trainer? No, they wouldn't listen to me," Trotter said. "Reese rides, but she doesn't compete yet. Zoey loves soccer, but she showed in the Classic this year for the first time, in short stirrup. She did great, with a fifth and a 10th. McLain Ward's daughter won the class."

Her eldest child, Cameron, 15, who worked at East Hampton Indoor Tennis this summer, plays the sport at Sag Harbor's Pierson High School. Given the internet's allure, it was important, said Trotter, whose husband, Gordon, is a personal trainer and former rugby player, to keep kids active.

There was an eight-year period beginning in her late 20s, during which she was working full time, building what was to become a very successful career at Sotheby's International Realty, and was having children, when she did not ride. It was Earle who encouraged her to come back, in addition to teaming her up with Balou's Boy.

Until she owned him, she'd been "a catch rider," most memorably on horses belonging to the late Noel Gross of Dark Horse Farm, which is up the road from the Classic's grounds in Bridgehampton. "I won a lot of hunter classes with her horses when I was 18, 19, and 20. Charlie Weaver trained me." At C.W. Post, she captained its intercollegiate equestrian team.

Nowadays, she only has time to compete in four or five shows a year, the Classic usually being the last of the season, but, given their recent success, "maybe we'll go to the Old Salem show at the end of the month," she said.

Before getting up into the saddle, Trotter kissed Balou's Boy on the nose, saying, brightly, "He's my boy -- small, but mighty." Then they rode out toward the fields.

Hoedown on the Farm, Cocktails in the Garden
Main Beach Free Concerts in Final Weeks
Services and Counseling After Death of Popular Teacher Assistant
END_OF_DOCUMENT_TOKEN_TO_BE_REPLACED