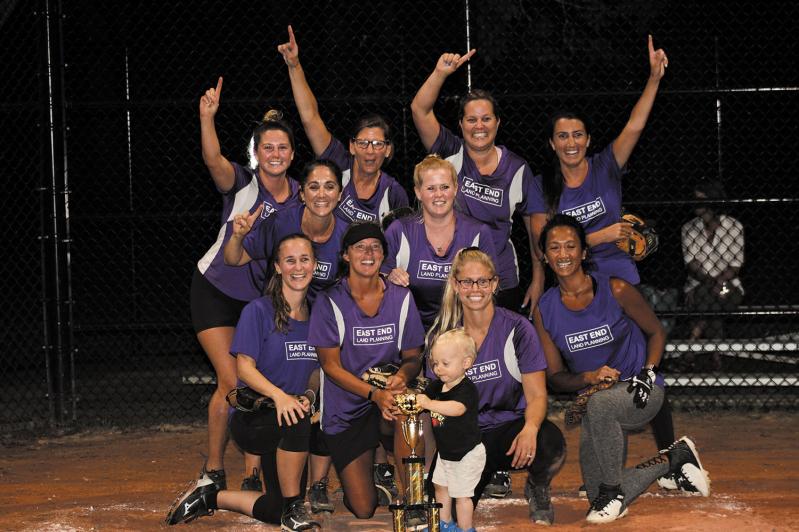 For the first four and a half innings it was a pitchers' duel contested by Groundworks' Emma Beudert and Land Planning's Katie Osiecki, but a five-run outburst by the latter team in the bottom of the fifth went far toward assuring East End Land Planning of an 8-3 win and its first-ever championship trophy.

A called third strike by Osiecki that hit the front of the plate caught Beudert, the Landscapers' leadoff hitter, by surprise, an augury evidently of what was to come.

Erica Silich then singled, but flyouts by Alexis Vargas and Erin Abran left her stranded at first base.

The Planners scored two runs in the bottom half. After Kara North drew a leadoff walk, Kathy Amicucci singled, and Osiecki grounded into a force play at third. Mylan Eckhardt reached first safely -- and a run came in -- on a grounder to short that was misplayed, after which Tina Grenci, with the bases loaded, drove in the second run by way of a sacrifice fly. A walk to Robin Helgerson loaded the bases again, for Kim Havlik, but a forceout at second ended the inning.

Osiecki held Groundworks in check in the top of the second, and Beudert's backspun high-arc offerings did likewise when it came to Land Planning's at-bat.

Groundworks' fifth hitter, Maddie Schenck, came to the plate with the bases loaded and two out in the top of the third, but her high, first-pitch fly ball into the outfield was caught for the third out by Havlik, Land Planning's short-fielder.

Beudert seemed to be finding her groove when, in the bottom of the third, she induced Osiecki to fly out to left and struck out Eckhardt, the cleanup hitter, but walks to Grenci and Shelley Bobek followed. With runners at first and second and two out, Beudert recovered, getting the third out on a flyout to shallow center by Helgerson.

Groundworks got on the scoreboard in the top of the fourth in the person of Lacey Bahns, who had advanced to second following a throwing error and came around to score as the result of a two-out error by Grenci, the Planners' third baseman.

Groundworks took a 3-2 lead in the top of the fifth. Beudert beat out a nubber that came to rest on the first-base line, and Silich's subsequent grounder, fielded by Helgerson, left first base untended, putting runners at first and second for Vargas, who flied out to Amicucci in center. Abran then popped out to Bobek, the second baseman, which brought up Schenck, who came through this time. Her line-drive base hit to left plated two runs, treating Groundworks to the sole lead it was to enjoy that night. Osiecki then walked Zoe Daunt, but Zoe's sister, Lacey, flied out to center to end the inning.

North popped out to Schenck at second in leading off the Land Planners' fifth, but then the roof caved in as Amicucci, Osiecki -- hers being a wicked one-bounce shot off the diving third baseman Daunt's glove -- Eckhardt, and Grenci singled consecutively, Eckhardt's base hit driving in two and Grenci's one for a 5-3 lead.

The rally continued as Silich dropped Bobek's fly in left field, which put runners on first and second with one out for Helgerson, who drove in Grenci with a single. Another run, Land Planning's seventh, came in on an infield single by Havlik before Abby Gawronski and Ava Locascio made outs.

Osiecki set Groundworks down one-two-three in the top of the sixth before the Land Planners tacked on yet another run in the bottom half thanks to a bases-loaded, one-out sac fly by Eckhardt.

A leadoff double by Beudert kept Groundworks' hopes alive in its last at-bat, but Osiecki stranded her opposite number there as she got Silich to pop out to short, Vargas to foul out to Grenci off the third-base line, and Abran to ground out short-to-first, clinching the championship and prompting a celebration.