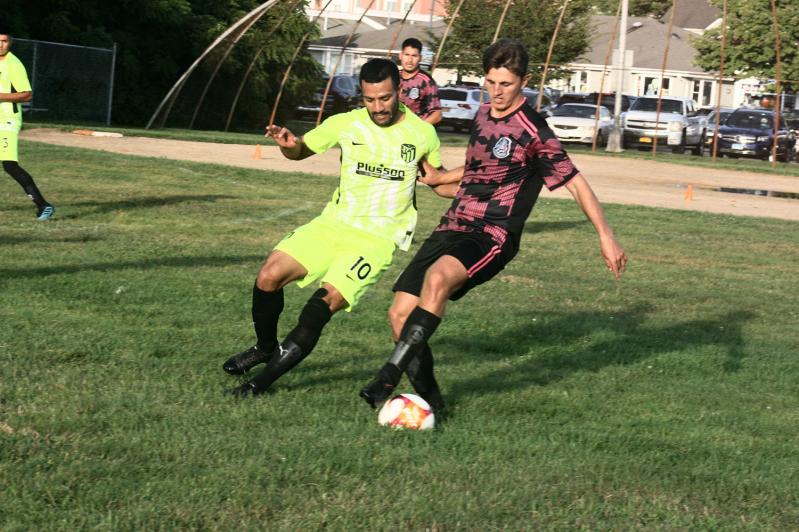 The 7-on-7 men's soccer league's top two teams in the regular season, namely Maidstone Market, which has won more championships by far over the years than any other squad, and the East Hampton Soccer Club, a hard-charging younger group, were upset in playoff semifinal games played last Thursday at East Hampton's Herrick Park.

F.C. Tuxpan, which had been dropped from third to fourth in the final standings because it used an ineligible player in its final two regular-season games, shut out the Market 2-0 in the evening's first showdown. F.C. Palora, which had been elevated from the fourth to the third seed, outplayed the Soccer Club on the way to a 3-1 victory.

Tuxpan and Palora, each of which had four losses in regular-season play, would have met in the league's championship game tonight at Herrick, but following the Maidstone-Tuxpan game, it was determined that Tuxpan's goalie, Wilson Tacuri, had played in only two regular-season games rather than the requisite three -- a finding that resulted in a forfeit by Tuxpan.

Maidstone, which had called the league manager Leslie Czeladko's attention to Tacuri's ineligibility, decided, however, not to play a championship game.

"Palora's the champion then," Czeladko said of the first-year entry in a telephone conversation Sunday afternoon.

Maidstone was without the services last Thursday of Nick Escalante, the league's leading scorer with 14 goals, but John Romero's team, which began the game a man short, was at nigh full strength in the second half.

Unlike Maidstone, Tuxpan, which had been pressed to put four men on the field at the start of its regular-season finale with Tortorella Pools the week before, came fully prepared this time, with Donald Martinez, Eddie Juarez, Jack Parker, and Jose Gutierrez, all threats to score, on hand.

Immediately, Tuxpan's forwards put pressure on Maidstone's veteran goalie, Alex Mesa, who in the early going twisted an ankle as he tripped in a small hole to the right of the cage while switching directions. As fellow and opposing players, as well as Romero and Czeladko, gathered around the downed goalie, four minutes on the clock, a running one, ticked away before the hole was filled and Mesa was ready to play again.

"The second always has more goals," Czeladko said during the halftime break, at which point neither team had put one in the nets.

Juarez came close to doing so in the opening minutes of the second frame, but his shot zipped just over Maidstone's crossbar. Soon after, the Market's Xavi Piedramartel got off two shots in quick succession, but Tacuri, Tuxpan's keeper, parried both, the second one at point-blank range.

The teams continued to battle unrestrainedly. With 12 minutes remaining, Nico Cifuentes Diaz tripped Martinez, resulting in a two-minute ban during which Tuxpan's Cristian Compuzano broke the ice, flipping an in-close shot into the nets over Mesa's outstretched hands.

With about nine minutes to go, Juarez, who had gathered in a long feed from Parker, made it 2-0, beating Mesa with a left-to-right shot from about eight yards out. The Market, with Piedramartel and John Romero Jr. being particularly active, continued to mount attacks, but to no avail.

In game two, Maicol Parra and Mark Bako, who was cheered on by a group from the Buckskill Tennis Club, which he manages, got the Soccer Club going -- Parra with a header that Diego Pitirris, Palora's keeper, saved, and Bako with a rocketed shot from 15 yards out that went wide left.

Twelve minutes into it, it was Pitirris's turn to slip on the slick grass, though, as Mesa had, he stayed in.

Before too long, however, it became clear that Palora's older players, Michael Montes de Oca in particular, were every bit a match for the Soccer Club's young Turks, who, thanks to a penalty kick by Jorge Naula in the 22nd minute, got on the scoreboard first.

With a little more than two minutes left until halftime, Bako was called for throwing an elbow, which resulted in a penalty kick that Montes de Oca buried, tying the count at 1-1.

Palora's William Solis put his team up for good in the early minutes of the second half as he broke away and beat the Soccer Club's goalie, Griffin Lohr, with a blast high into the nets.

In the 40th minute, Andres Velez, with an assist from Montes de Oca, made it 3-1, putting the Soccer Club in a big hole. Its prospects -- and large areas of the field itself, despite the fact that the lights had come on -- grew ever darker in the final 20 minutes of feverish play.

With five and a half minutes remaining, the Soccer Club's Sebastian Fuquen was presented with a penalty kick, but his bid sailed high.